Jamal is one of the playable heroes in Hero of Robots. He is the pilot of Mammoth.

Jamal is a cheerful guy, who loves dancing. He is skilled dancing no moves like hip-hop, jazz, etc.

The curly afro, headband, and saggy pants, as well as his love for street dance and hip hop, make him the total hip hop boy. His fat body and thick lips, however, have led his friends to nickname him - The Flying Sausage! 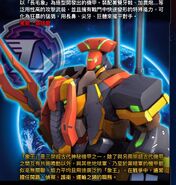 Add a photo to this gallery
Retrieved from "https://hero.fandom.com/wiki/Jamal_(Hero_of_Robots)?oldid=1812738"
Community content is available under CC-BY-SA unless otherwise noted.