James Bond is a Senior Operational Officer of the 'Double-O' ('00') Branch, an ultra-covert Black Ops unit within the British Secret Intelligence Service (MI6). As an agent of MI6, Bond holds code number 007.

The late Sean Connery was the first actor to perform the role on the big screen. He appeared in Dr. No (1962), From Russia with Love (1963), Goldfinger (1964), Thunderball (1965), You Only Live Twice (1967) and Diamonds Are Forever (1971). In 1983 he returned to the role for the last time in the unofficial James Bond film, Never Say Never Again. In addition he also provided his voice and likeness for 2005's video game adaptation of From Russia with Love.

He also played Henry Jones Sr. in Indiana Jones and the Last Crusade, Robin Hood in Robin and Marian and Allan Quatermain in The League of Extraordinary Gentlemen.

In the novels, James Bond is the son of a Scottish father, Andrew Bond of Glencoe, and a Swiss mother, Monique Delacroix, from the Canton de Vaud. He acquired a first-class command of the French and German languages during his early education, which he received entirely abroad. Both parents were tragically killed during a climbing accident in the French Alps when he was eleven.

After the death of his parents, Bond goes to live with his aunt, Miss Charmian Bond, where he completes his early education. Later, he briefly attends Eton College at "12 or thereabouts", but is removed after two halves because of girl trouble with a maid. After being sent down from Eton, Bond was sent to Fettes College in Scotland, his father's school.

After leaving Fettes, earlier EON films note that Bond studied at Cambridge University. There, he achieved a first in East Asian languages. In Fleming's novels, Bond alluded to briefly attending the University of Geneva (as did Fleming), before being taught to ski in Kitzbühel. Following his graduation, Bond joined the Ministry of Defence and became a lieutenant in the Royal Naval Volunteer Reserves, rising though the ranks to commander. Bond applied to M for a position within the "Secret Service", part of the Civil Service, and rose to the rank of principal officer.

Shortly before his next assignment, M, Bond's superior in MI6, gave him the choice of either selecting a new weapon on a mission to investigate the recent disappearance of British Secret Service operative John Strangways or to return to standard intelligence duties after an incident with his Beretta M1934. He was then given a choice by Major Boothroyd of using a Walther PPK or a Smith & Wesson .38 Special 5-round hammerless revolver. Bond reluctantly decided to take the weapons on the mission and the Walther proved valuable in Jamaica, where Strangways had gone missing.

Although Bond's life was threatened on the mission several times by various murderous operatives, one of whom placed a tarantula in his bed, Bond found help in CIA agent Felix Leiter and native fisherman, Quarrel, who aided Bond in his investigation of Strangways' disappearance. After finally determining that a Dr. No was responsible for Strangways' murder, Bond killed Dr. No in revenge and destroyed his island, Crab Key, before escaping in a boat with a beautiful Jamaican native named Honey Ryder. The two later encountered a Navy ship whose crew offered to tow their boat back to the Jamaican mainland.

From Russia With Love

Bond later returned to London but, six months after he had left the city, he was sent on a mission to Istanbul in an attempt to obtain a lektor decoder device from a stunning Russian cipher clerk named Tatiana Romanova, who had supposedly fallen in love with a photograph of him. Yet Tatiana had unknowingly been set up by the No. 3 of the criminal organization SPECTRE, Rosa Klebb who sought to avenge the murder of their operative, Dr. No. Bond was aided by Kerim Bey, who helped the British agent bring both the device and Romanova from Istanbul to Venice.

But despite several SPECTRE agents attempting to kill Bond, most notably Bulgarian assassin Krilencu at a Gypsy camp and the devious assassin Red Grant, who attempted to garrote Bond on the Orient Express before he was killed himself after being tricked into opening Bond's attaché case in a manner that detonates a tear gas booby trap, allowing Bond to attack and kill him. Bond and Romanova escape with the lektor to Venice. Rosa Klebb, disguised as a hotel maid, attempts to steal back the lektor and kill Bond, but ends up being shot by Romanova.

Subsequently, Bond was sent on a mission to Mexico, where he ensured that a revolutionary named Mr. Ramirez could no longer finance his revolutions. After the successful completion of his mission, Bond was attacked by an assailant, who he killed before taking a plane to Miami.

In Miami, Bond was instructed to observe bullion dealer Auric Goldfinger, who was staying at the same hotel. However, Bond became romantically involved with Goldfinger's girlfriend, Jill Masterson, who later died of skin suffocation as a result of being entirely covered in gold. Bond returned to London, where he was ordered to investigate Goldfinger's involvement in the possibly illegal transportation of gold, but he was warned that, if he treated the assignment as a personal vendetta, he would be replaced on the mission by 008.

Alfred Blacking, manager of the golf club, introduces Bond to Goldfinger noting Bond is an old club member. Bond and Goldfinger play a round of golf together in which Goldfinger cheats, but Bond still wins. While investigating Goldfinger, Bond traveled from England to Geneva, Switzerland, where he met Jill Masterson's vengeful sister, Tilly Masterson, before she was killed by Goldfinger's henchman, Oddjob, with the modified bowler hat that he always wore. Bond determined that Goldfinger was indeed illegally smuggling gold but he was soon imprisoned by the criminal, who ordered his transportation to the United States, where Bond learned the specifics of the criminal's planned Operation Grand Slam (the robbery of Fort Knox). Bond ultimately prevented the criminal's destructive plan from becoming a reality and managed to kill both Oddjob by electrocuting him through his hat and, finally, Goldfinger.

In France, James Bond fought and killed SPECTRE operative Colonel Jacques Bouvar, avenging the murder of two of Bond's former colleagues. After encountering several SPECTRE agents at a health spa in the south of England, Bond investigates the hijacking of an Avro Vulcan loaded with two atomic bombs, which had been taken by SPECTRE. The organisation demands a ransom against Britain and the United States for the return of the bombs. Bond follows a lead to the Bahamas, where he meets up with his CIA counterpart and friend Felix Leiter.

The pair suspect a rich playboy, Emilio Largo, and search the area around his yacht and then the area where they think the yacht may have travelled. After finding the plane—but without the nuclear devices on board—the two agents arrange for Largo's yacht to be tracked and ambushed once the bombs are being moved by Largo. Bond succeeded and Largo was ultimately killed by his vengeful mistress Domino.

You Only Live Twice

Shortly thereafter, Bond traveled to Japan, where he faked his own death to avert attention from SPECTRE. However, he was then sent by M to investigate the capture of a U.S. spacecraft in Japan to by an unidentified spacecraft. Upon his arrival, Bond is contacted by Aki, assistant to the Japanese secret service leader Tiger Tanaka. Bond established that the mastermind behind the hijacking is Ernst Stavro Blofeld head of SPECTRE and follows the trail to Blofeld's island headquarters.

Bond trains with Tanaka in ninjitsu who changes his appearance to be Japanese as cover and weds him to Kissy Suzuki. Bond and Kissy find Blofeld's lair in a Volcano. Tanaka's ninja troops attack the island, while Bond manages to distract Blofeld and create a diversion which allows him to open the hatch, letting in the ninjas. During the battle, Mr. Osato is killed by Blofeld, who activates the base's self-destruct system and escapes. Bond, Kissy, Tanaka, and the surviving ninjas escape through the cave tunnel before it explodes, and are rescued by submarine.

Bond raced around the globe looking for Blofeld until he found him during a plastic surgery operation. After a fight, Bond apparently killed the SPECTRE head by melting him in hot mud.

Bond is then tasked with investigating a major diamond smuggling ring which begins in Africa and runs through Holland and the UK to the United States. Disguised as professional smuggler and murderer Peter Franks, Bond travels to Amsterdam to meet contact Tiffany Case: he is given the diamonds and travels on to the US, where he is met by Felix Leiter. Bond moves through the chain, which leads to the Whyte House, a casino-hotel owned by the reclusive billionaire Willard Whyte.

Bond follows the diamonds to a pick-up by Bert Saxby, Whyte's head of security, and then onto a research laboratory owned by Whyte, where he finds that a satellite is being built by a laser refraction specialist, Professor Dr. Metz. Suspecting Whyte, Bond tries to confront him, but instead meets Blofeld, who captures the agent and explains to him that the satellite can blow up nuclear missiles. Blofeld admits that he intends to auction it to the highest bidder. Bond escapes and frees the captive Whyte and they establish that Blofeld is using an offshore oil rig as his base. Bond attacks the rig, stopping Blofeld's operation and dispersing his organisation.

Most of the cast from the film returned in likeness. Connery not only allowed his 1960s likeness as Bond to be used, but the actor, in his 70s, also recorded the character's dialogue, marking a return to the role 22 years after he last played Bond in Never Say Never Again. 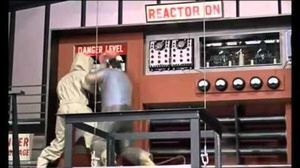 Bond facing off against the maniac villain, Dr.No 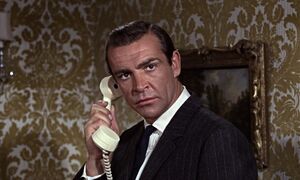 Bond getting off the phone with M 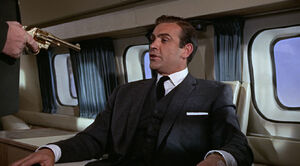 Goldfinger has Bond at gunpoint

"I think he got the point." 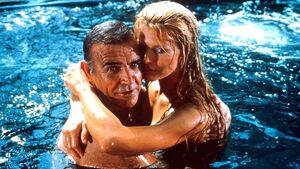