Tackle terrorism and succeed any assignment given to him

Commander James Bond is the main protagonist of 007 series. He is a Senior Operational Officer of the 'Double-O' ('00') Branch, an ultra-covert Black Ops unit within the British Secret Intelligence Service (MI6). As an agent of MI6, Bond holds code number "007". The 'double-O' prefix indicates his discretionary licence to kill in the performance of his duties.

Finally, Timothy Dalton took over the role from Roger Moore in 1987 two years after Moore's departure in 1985. He appeared in The Living Daylights and Licence to Kill. Legal issues between the Bond producers and the studio over distribution rights resulted in the cancellation of a proposed third Dalton film scheduled for release in 1991 and put the series on a hiatus for several years until 1995. In 1994, Dalton announced that he would not return in the upcoming Bond film, Goldeneye before the role was given to Pierce Brosnan.

Dalton was approached by the Bond Producers twice before 1987, firstly in 1969, but Dalton thought he was too young to play the role. Also in 1979, but didn't accept the role as he stated that he disliked the parodic direction the 007 series was going.

After a training exercise for Bond and the other 00-Agents in Gibraltarturns deadly for 004 and a few SAS guards the agents were sparring against, Bond is given his next mission: assist in the defection of a highly ranked Soviet general named Georgi Koskov when he visits the Conservatoire in Bratislava, Czechoslovakia (nowadays Slovakia). The defection works out, but Bond suspects something's amiss when the sniper sent to kill Koskov was the pretty cellist performing at the Conservatoire, who was clearly not a professional with a sniper rifle. Against orders, Bond merely wounds the woman, before helping Koskov get over the border to Austria via one of Q's contraptions.

Back in London, Koskov reveals that the new head of the KGB, General Pushkin, is starting up a ruthless counterintelligence operation called Smiert Spionom, Russian for "Death to Spies." Koskov fears that it will lead to retaliation from the British or Americans and possibly even lead to nuclear war. However, before further details can be gleaned from him, Koskov is snatched from the safe house he was being kept in, assumedly by the KGB. Bond thinks there's more to the story than meets the eye, but M is convinced enough to order that Pushkin be killed while at a trade convention in Tangiers, especially when 004's body is returned from Gibraltar with a found note reading Smiert Spionom. Bond accepts the assassination order reluctantly, but decides that there's enough time to investigate things in Bratislava, starting with that pretty cellist.

A bit of extra options installed 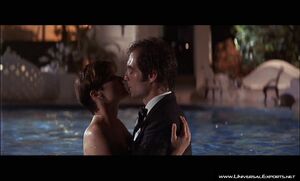 Bond and Bouvier romantically reconcile with each other