Saving the world from S.C.U.M. agents

James Bond Jr. is the teenage hero of James Bond Jr. and James Bond's nephew. He attends Warfield Academy and has lots of friends there who aid him in his missions. Romance is occasionally hinted at between Bond and Tracy Milbanks.

He was voiced by Corey Burton, who also voiced Ludwig Von Drake in House of Mouse, and DuckTales.

While attending prep school at "Warfield Academy", James Bond Jr., with the help of his friends I.Q. (supposedly the grandson of Q) and Gordo Leiter (supposedly the son of Felix Leiter), fights against the evil terrorist organization SCUM (Saboteurs and Criminals United in Mayhem). Expanding on his uncle's famous line, James Bond Jr.'s catch-phrase was "Bond, James Bond. Junior."

Being an animated series, it regularly surpasses even the Bond movies in the matter of implausible gadgets and mad scientists, and, of course, the violence of the adult Bond series is nowhere in evidence. Despite this, the show was fully sanctioned by the rights holders to the James Bond property.

Fans of James Bond generally do not consider James Bond Jr. to be part of official Bond canon, especially as it conflicts with the fact that Bond was an only child and that the series featured characters such as Dr. Julius No who had been previously dealt with in the films and/or novels. Jaws, a recurring villain from the Roger Moore film era, also made occasional appearances; usually partnered with Nick Nack making the two henchmen a comical duo as they tend to bicker a lot. Sometimes Oddjob is thrown into the mix for a henchmen interpretation of "The Three Stooges". Auric Goldfinger also appears revealing he has a snotty, teenage daughter named "Goldie." Many episode titles parodied the titles of Bond films, i.e. "A View to a Thrill" and "Live and Let’s Dance". 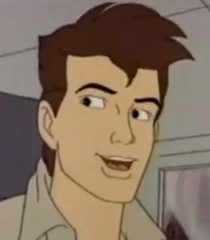 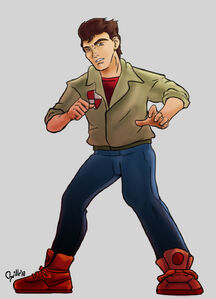