He is portrayed by Tom Hiddleston, who also played Loki Odinson in the Marvel Cinematic Universe and Kanjigar the Courageous in Trollhunters: Tales of Arcadia.

Conrad was hired by William Randa and Houston Brooks as a tracker for an expedition to Skull Island, after finding him in a bar in Bangkok, where he defended it himself in a fight after wining in a game of pool. Although Conrad was reluctant be part the expedition at first, he agrees on the condition that he get paid five times what they were originally paying him and a bonus if they make back alive. On the ship, Conrad meets, Mason Weaver, an anti-war photographer and photojournalist.

After the expedition team made it through the storm surrounding the island in helicopters, flew by a military squadron they then begin to drop bombs on to the ground of the island being told that it was for mapping the island. However, Conrad and the others find theselves being attacked by giant gorilla known as Kong who attacks the helicopters. Kong's attack kills most of the soldiers in the Sky Devils, earning the ire of him Lt. Col. Preston Packard, the leader of squadron, but Conrad, along with Weaver, Brooks, Sky Devils member Reg Slivko, Landsat supervisor Victor Nieves, and biologist Sa Lin. Conrad advises to make the North side of Skull Island, where helicopters will be sent to put them up.

While heading to North side of the island, they encounter a group island natives known as the Iwis and Hank Marlow, a former US airforce lieutenant, who been stranded on Skull Island since World War 2. At the Iwis' village, Marlow explains to Conrad and the rest of them that on the island Kong is considered a god as well as ruler of the Island and how he is a the last of the species that protected the Iwis, and he tells a them about a race giant reptilian that live underground Skull Island and killed his friend former Japanese pilot Gunpei Ikari that he calls Skullcrawlers. He also explains to them that Kong attacked them because they woke up some of the Skullcrawlers when they dropping bombs on the island, and tells about the largest of the Skullcrawlers he calls "The Big One", who also wiped out most of Kong's species.

In 2014, Conrad accompanied Emma Russell, Ishiro Serizawa, and Vivienne Graham in examining the damage done to a Monarch base, after an "earthquake" caused a series of aftershocks to travel all the way up to Guam. James explained to Emma that experts thought the cause of the aftershocks was just tectonic activity. They were, however, incorrect as the aftershocks were caused by MUTO Prime.

A British SAS officer sent to Vietnam to teach jungle warfare and survival techniques to American troops, as the war comes to an end, Conrad becomes something of a lost and disillusioned soul. Recruited as a tracker by Bill Randa, Conrad’s raw courage, survival skills and understanding of nature could represent the expedition’s best shot at making it off the island alive. 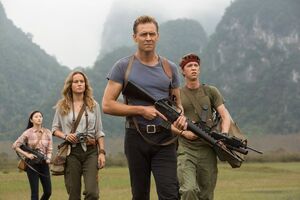 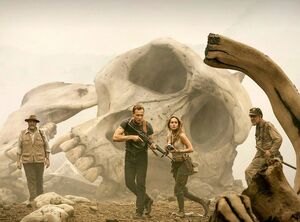 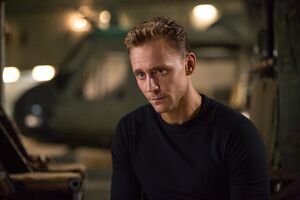