Escape from or kill all who comes after his life.

Expose Lionel and his gangs' snuff film activity to the Journalist (Succeeded).
Save his family from captivity (Failed).
Protect the Tramp.
Kill Lionel Starkweather (Succeeded).

Hero by Proxy
Pawn of the Villain

James Earl Cash is the protagonist and main playable character in Manhunt, a former inmate of Darkwoods Penitentiary, who was freed from death row and set loose in Carcer City.

He was voiced by Stephen Wilfong.

James Earl Cash was freed from death row and in return must participate in a snuff film, directed by Lionel Starkweather.

It would appear that Starkweather chose his candidate well (perhaps too well), as Cash displays no outward emotion or regret while butchering his pursuers and is no stranger to violence. Cash is shown to be very capable of making sure his enemies are dead, and his executions are nothing short of brutal. He is also quite comfortable with firearms and basic gun combat.

Cash remains rather emotionless throughout most of the storyline and displays no remorses towards his enemies, however he does display some sympathy for his kidnapped family members during one scene, and is visibly angered when he sees them killed. He also appears slightly scared the first two times he runs into the Cerberus, and when he is attacked by Piggsy in the elevator he panics and climbs through the vent, forgetting about his gun.

He helps the female journalist by escorting her safely to her apartment before telling her to get out of the city while she can, showing that he's good enough to allow an innocent person who has witnessed him commit multiple murders escape unharmed.

Sometime before 1992, James Cash was wanted by the San Andreas Police Department, which is likely what caused him to abandon his family. It is indicated that he was part of an organized crime ring, assumed to be either an enforcer or a hitman, due to the fact that only murder would get him the death penalty. Indeed, Cash was already a proficient and highly experienced killer before the events of the game. During his career as a criminal, Cash has been evading the law for a decade, until the year 2000 when he was finally caught in Carcer City, and locked away in Darkwoods Penitentiary. Cash was then sentenced to death, the execution being three years later.

In 2003, the execution took place and everyone believed him to be dead. However, due to the works of Lionel Starkweather, who had bribed the Darkwoods Penitentiary staff, James wakes up in a closed down coffee and donuts store with the "Director" speaking to him through an earpiece. James is promised freedom, as long as he particpates in a snuff film, where he must kill gang members across the city who are aware of him and have been instructed to hunt him down.

James is first intoduced to a gang called the Hoods and must kill them as he makes his way through their turf, until he is ambushed by the Cerberus and thrown in the back of a van to be taken to the next location. James is dropped off at Dentons City Junkyard, where he must kill a gang of white supremists called the Skinz, then at Carcer City Zoo, where he fights a gang of war veterans called the Wardogs, and saves his kidnapped family.

Then he is dropped off at Carcer City Mall in search of a video tape, the Director made for him, while having an intense shootout with a hispanic gang of satanists and pedophiles named the Innocentz. The tape is revealed to be footage of his family being massacred. James is then told to escort a tramp through Innocentz turf and then clear out the Carcer Chem Factory.

After this, James is taken back to Darkwoods Penitentiary to discover his former fellow inmates have broken free and killed all the guards. They have formed a gang called the Smileys and James is instructed to kill them all. James then encounters the White Rabbit, a man in a rabbit costume who James is told to follow. The rabbit leads him into multiple traps, where he nearly dies unitl one point where Starkweather informs Cash that this is the point in the film where he must die, but James fights back. He kills the White Rabbit and escapes.

It isn't long before he runs into Ramirez, who works for Starkweather. Ramirez decides to toy with him by setting him loose in a closed off area for his Wardogs to hunt him down. This backfires as James kill them all, including Ramirez.

James is now picked up by a female Journalist, who explains she has been gathering evidence to bring down Starkweather. James escorts her to her apartment, while the cops, who have been paid off by Starkweather, attempt to kill them. James kills many cops and makes it to Stockyard, and then to an abandoned train yard where he is taken hostage by the Cerberus.

Brought to Starkweather's estate, James soon gets loose and kills his way through the mansion, killing the Cerberus leader in the process. On his way up to the office, he gets ambushed by Piggsy, who had escaped around the same time Cash did, who must be killed to reach Starkweather. Once Piggsy is dead, James confronts Starkweather and kills him, leading the cops to his snuff film ring, however Cash is long gone by the time they get there.

It is unknown where Cash went after killing Starkweather, but it is assumed he left Carcer City. 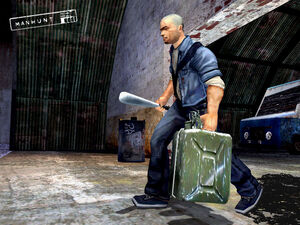 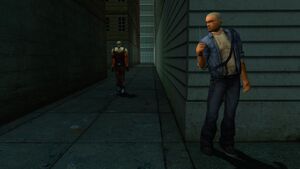 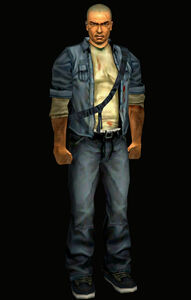 Add a photo to this gallery
Retrieved from "https://hero.fandom.com/wiki/James_Earl_Cash?oldid=1709912"
Community content is available under CC-BY-SA unless otherwise noted.