James "Jim" Gordon is one of the secondary protagonists in Batman Begins, the deuteragonist of The Dark Knight, and the of The Dark Knight Rises. He is the leader of the Gotham Police and stern and morale officer.

He was portrayed by Gary Oldman, who also portrayed Sirius Black.

Becoming a leader of the Gotham Police, Gordon initially loses hope of protecting the city, when he sees just how corrupt it is with a majority of the police department answering to the mob.

He finds newfound hope though in the appearance of Batman, who he soon begins to work with to finally clean up the streets of Gotham and give it the peace that it was overdue to have for decades.

Throughout their partnership, Gordon and Batman not only face the organized crime and random violence but a variety of new threats to Gotham with the emergence of several villains with their own designs for the city. 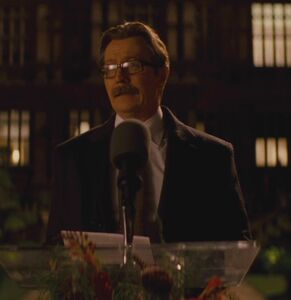 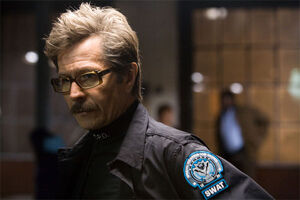 Gordon is promoted to commissioner after the Joker's capture
Add a photo to this gallery
Retrieved from "https://hero.fandom.com/wiki/James_Gordon_(Nolanverse)?oldid=1760569"
Community content is available under CC-BY-SA unless otherwise noted.