Being with his insect-like friends

To get to New York City (succeeded)

James Henry Trotter is the main protagonist of the book and 1996 film titled James and the Giant Peach.

He was both portrayed and voiced by Paul Terry in the movie.

In the beginning of the movie, James is seen living with his parents in a little house by the sea where they celebrate James' birthday and look at the clouds where James spots the tallest building in the world to which his father shows him a travel guide of the tallest building in the world which is The Empire State Building in New York City where James' father tells James that's where they're going and that there's lots of kids in the city and New York City is a place where dreams come true. However, his parents are killed by a rhinoceros from the sky and James is sent to live with his two cruel and abusive Aunts, Spiker and Sponge who abuse James and make him work day and night as well as calling him mean and insulting names such as "You Nasty Little Beast". One day after James finishes chopping the wood for his aunts he begins to look at his travel guide of New York City when his Aunts come over and snatch the travel guide away telling him that he's never going there because he'll always live with them and that he shouldn't dream because that's what got his parents killed and then they rip up the travel guide and order James to get back to work. Later that evening as James returns from doing his work his aunts tell him that they've already finished all the dinner so James steals a bag of food crumbs from the garbage to eat. As James goes into his room he notices a spider spinning its web and tells it that he'll be its friend and begins to sing about his dream to go to New York City (My Name is James song). The next day Spiker and Sponge find the spider in James' room and try to kill it but luckily James takes it outside before they can and tells it to get away from this place and that he wishes that he could get away too.

While rescuing the same spider from being squashed by his aunts, James meets a wounded Confederate soldier who appears with a bagful of magic green "crocodile tongues", which look like twisty bugs and are supposed to make his life better. The soldier warns him not to lose the "tongues" and magically disappears. When James is returning to Sponge and Spiker's house, he trips and the "tongues" fall into the root of an old peach tree, affecting it and its inhabitants in amazing ways.

One peach is soon found on the tree, and it grows to immense proportions. Spiker and Sponge uses the giant peach as an attraction, making lots of money as James watches, from inside the house, in tears. After one night of success, James is sent to pick up garbage. While doing so, he grabs a chunk of the peach as a "crocodile tongue" enters it for him to eat. James ventures into the giant peach and transforms into a stop-motion animated character, where he finds and befriends a group of anthropomorphic invertebrate animals (who are all much larger than his small petite frame) who also dream of an ideal home (Mr. Centipede, Mr. Grasshopper, Earthworm, Mrs. Ladybug, Miss Spider, and Glowworm (filling in for Silkworm from the original book)). As they hear the aunts search for James, Centipede manages to cut the twig holding the giant peach to the tree and the peach rolls away to the Atlantic Ocean with James and his friends inside it.

They use Miss Spider's silk to tie a hundred seagulls to the peach stem, while battling against a giant robotic shark, allowing them to fly their way to New York City. While flying, James and his friends eventually find themselves hungry and soon realize that "their whole ship is made out of food". After gorging most of the inside of the peach, Miss Spider, while using her web to tuck in James, reveals to him that she was the spider he saved from Spiker and Sponge. James then has a nightmare of him as a caterpillar attacked by Spiker, Sponge, and The Rhino. Awaken, he and his friends find themselves in Antarctica, lost and cold. Centipede jumps off the peach to find a compass and get caught by pirates. Luckily, James and Miss Spider rescue him just in time. Now knowing their way to New York, the bugs tell James that he and them are family. As the group finally reach New York City, they realize that they flew off-course and The Rhino appears riding in the clouds. James learns to face his fears and the dangerous rhino hits the peach before it disappears. He falls into the peach and the bugs fly away from it. James, returning to his live-action form, finds out that the peach is on the Empire State Building dripping on the citizens. As he is rescued by crane men, he discovers that his aunts found him and plans to take back James and the peach. James tells everyone his adventures and reveals Spiker and Sponge's abusive behavior towards him, who gasp in shock at the revelation. They attempt to kill James with fire axes while the policemen try to protect him. The bugs are able to fly back down to rescue James in time and tie up Spiker and Sponge, using Miss Spider's silk. The police have crane men to take them away, while James and his group are praised as heroes as the children in New York ask if they can eat his giant peach and James allows them to eat the fruit since the giant peach won't last forever.

As thousands of people gobble up the fruit, one of the child asked who James was, in which he replied: it's James. The peach stone is made into a permanent house in Central Park, a while later as James and the insects begin to live there. James now has all the friends he wished for by telling them his courageous adventures with the bugs becoming his legal guardians. It is then revealed that the narrator is the Confederate Soldier. While finishing the story, he grabs a "crocodile tongue" and moon blinks at the audience. 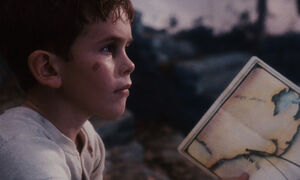 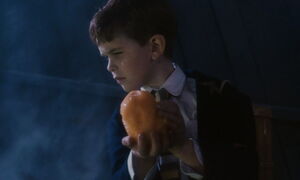 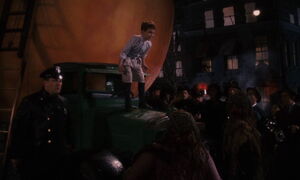