Well educated
Knowledgeable on the occult

Sermonizing others, Reading the Bible

Bring the Émigré Manuscript back to the Vatican

Father James O' Flaherty is one of the three main characters in the videogame Koudelka, the game that started the Shadow Hearts series. James is a priest sent from the Vatican to recover a cursed tome from the estate of his old friend, Patrick Heyworth. While there he meets and joins up with Edward Plunkett and Koudelka Iasant in order to survive the monsters that infest the corridors of the monastery.

James was enamored with a young lady named Elaine in his youth. Both James and his friend Patrick Heyworth vied for Elaine's affections but Patrick was more aggressive in his endeavors and quickly endeared himself to Elaine. When Elaine and Patrick started dating James took the situation as a sign from God that he was not meant to be with any woman for James could not see himself with anyone but Elaine and so James took up the secular life as a priest. By the time James was a fully ordained priest Patrick and Elaine were married. James left to receive in depth training at the Vatican shortly after the wedding.

Though all agreed the claims of magic books that raised the dead and the like were just outlandish pagan claims the books were property of the Vatican and a treasured part of antiquity and had to be recovered. James and Morris were dispatched to look for the books, they traveled together at first but eventually needed to split up when evidence pointed to the thief selling the books to others. Morris would focus on tracking down the thief himself but James followed up on trying to track down the individual books, the Émigré Manuscript was the first one to be tracked down and when signs pointed to James old friend Patrick having it he made it his personal mission to attempt to get the book back. James desperately hoped he could talk his friend into giving back the book peaceably so he would not need to bring him before the Vatican to stand trial.

When James arrived at Patrick's home which was built into a renovated abbey called the Nemeton Monastery he found Patrick's two servants Ogden and Bessy Hartman, an old married couple that tended the grounds for Patrick. The couple seemed kindly and cooperative but told James that they had not heard from their master in some time and he had been consumed by his work for months. Little did James know that he had hit on a very sensitive situation, one Ogden and Bessy were deeply invested in despite the kindly married couple routine, before he knew what was happening James had passed out from the drugs Bessy had slipped into his meal. The two tossed James into their herb garden and locked him there until they received word from Patrick on how to handle the situation.

A witch named Koudleka had also arrived at the abbey only to find a man named Edward there under attack by monsters. After saving him the two decided to team up to find out what was going on in the haunted monastery. Bessy and Ogden invited the two for dinner and had slipped poison into their food as well. Koudelka had detected the aroma of poison in the food and had made certain not to eat or drink anything shortly leaving the dining hall Koudleka cured Edward and the two decided it was better to fake their deaths that confront their attempted poisoners so they could continue to search the sanctuary in peace.

Short after ducking out of Ogden and Bessy's attention Koudelka and Edward found the herb garden and a monster infesting it like most other parts of the monastery. Shortly after fighting off the monster James who was about to be eaten in his sleep awoke from the effects of the poison. James refused to give much information on his purpose in the monastery but recognized the danger of traveling the halls alone and despite being put off by working with a heretic witch and a lecherous hedonist James saw working with the two as the safest route to find out what was going on in the monastery and find Patrick.

James' pious and sometimes elitist personality often clashes with his two traveling companions as Koudelka is a pagan and Edward is a hedonist.  In battle James is much slower than his two party-mates but has high piety, which protects him from magical attacks more and boosts augmentation spells, while James like the other two characters, can be shaped to any role the player likes his starting stats make him easily fall into the traditional role of party buffer, or "green/white mage" in more broad fantasy game terms. 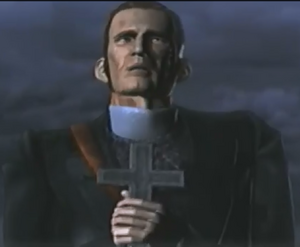 James prays to god for a miracle. 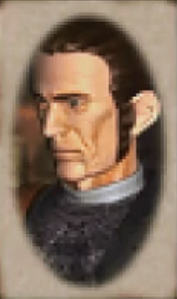 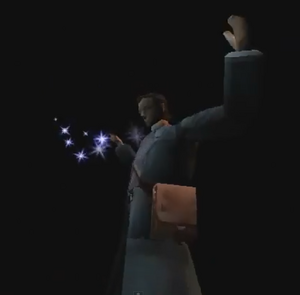 James casting holy magic
Add a photo to this gallery

Retrieved from "https://hero.fandom.com/wiki/James_O%27_Flaherty?oldid=2095447"
Community content is available under CC-BY-SA unless otherwise noted.