Superman's Pal or The Guardian

Photographer and Art Director for CatCo. Moonlights as a Private Investigator and researcher for Team Supergirl.

He used to work with Clark Kent and Lois Lane in the Daily Planet as a cub Reporter and Photographer and helped Superman out. He was labeled as Superman's Pal and found out Superman is Clark Kent and help him out on missions. He moved to National City and knew Supergirl identity as Kara Danvers and work as a Photographer and Art Director for CatCo. He has a new purpose in life where he helps Supergirl mission to protect the world and take down all the criminals in Fort Rozz as a member of Team Supergirl.

Voice of Reason
James "Jimmy" Olsen is the best friend of Clark Kent and Winn Schott, the boyfriend of Lena Luthor and the former art director and acting CEO of CatCo Worldwide Media, who was promoted by Cat Grant to be a stand-in for her while she is on her leave of absence from the company. Always longing for his own brand of justice, James asks his best friend Winn Schott to help him in his quest and adopts the guise of Guardian, a vigilante operating in National City.

James is intelligent, kind, caring, selfless, brave and moral, with an urge to help people in any way possible. This was partly inspired by his many years of assisting Superman. He severely dislikes Sam Lane, partly because he has interfered in his relationship with Lucy Lane, which James and Lucy both correctly felt was not his place, but mainly because of his arrogant, disrespectful, ungrateful and immoral traits. 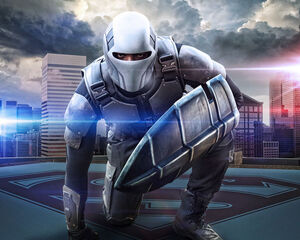 James Olsen as Guardian
Add a photo to this gallery
Retrieved from "https://hero.fandom.com/wiki/James_Olsen?oldid=1942170"
Community content is available under CC-BY-SA unless otherwise noted.