Sulley reappears in the prequel. He looks shorter, skinnier, and shaggier in his teenage years.

His nickname in college was Jimmy Sullivan.

In the first film, Sulley was top scarer of Monsters, Inc., and was naturally afraid of humans due to their rumored "toxic touch" that could kill the biggest monsters in an instant - until he met Boo, a human girl who found her way into the monster world and into the factory. Sulley, who was initially hesitant, became Boo's protector and obtained a fatherly role to the human. Constantly worrying about her and protecting her from harm while at the same time unlocking the secrets that humans were not as deadly as rumored. Starting by treating Boo like a pet, he eventually grew to care for her, the attention drawing away from a jealous Mike. Randall Boggs, Sulley's rival who also wants to be top scarer, tries to use Boo in an experiment to forcibly extract screams for the growing energy crisis that relies on their cries to provide, and risking his friendship with Mike, Sulley comes to her rescue and in the process discovers that a child's laughter is 10 times more powerful than scream. Sometime after Mr. Waternoose, the CEO of Monsters, Inc., is arrested by the CDA, Sulley becomes the new CEO and changes the policy to obtain children's laughter instead, apparently turning the energy crisis around.

Sometime after the events of the film, Sulley announces Put That Thing Back Where It Came From Or So Help Me!, a company play that stars Mike, who has also directed, written, and produced the play, in front of the audience, and he appears in the play as a co-star. 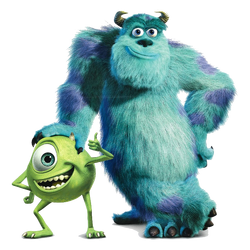 Promo art of Sulley with Mike 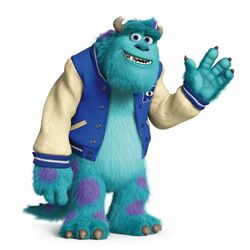 Promo art of Sulley, as he appears in Monsters University as an 18-year-old college student
Add a photo to this gallery
Retrieved from "https://hero.fandom.com/wiki/James_P._Sullivan?oldid=323538"
Community content is available under CC-BY-SA unless otherwise noted.