Agent of the Impossible Mission Force

Jane Carter is an IMF agent and a member of Ethan Hunt's team. After the death of her partner, Agent Trevor Hanaway, Carter teams with Hunt in an attempt to stop a Swedish-born Russian terrorist named Kurt Hendricks from facilitating a global nuclear war. In the process, she struggles with the desire to kill a French assassin named Sabine Moreau who has a connection to Hendricks and was directly responsible for Hanaway's death.

She was portrayed by Paula Patton, who also portrayed Garona in World of Warcraft.

Little is known about Jane Carter's early life other than being born in the United States, just like two of her colleagues, Ethan Hunt and William Brandt.

At the unknown point of time, she joined the Impossible Mission Force and became a high ranking member (as she lead a operation with her team). It was implied that she met and began a relationship with Trevor. She partnered with Hanaway and Benji Dunn on an operation to retrieve Russian nuclear launch codes in Budapest, Hungary.

She was the leader of an operation to retrieve the Russian nuclear launch codes in Budapest. The operation went wrong as one of the agents, Hanaway, was killed by Sabine Moreau.

Later, Carter assists Ethan Hunt in escaping from a Russian jail. She helps infiltrating the Kremlin, which is destroyed by a bomb, but she and the rest of the team manage to escape. Ethan and William Brandt meet up with her and Benji on a train car where he gives them a mission briefing. They travel to Dubai where Kurt Hendricks (disguising himself as Marius Wistrom) is staying at the Burj Khalifa. Carter convinced Wistrom and nuclear code expert, Leonid Lisenker, that they have exchanged the codes by pretending to be Moreau while Brandt and Dunn convince Moreau of the opposite. However, Moreau realizes that Brandt is an agent and escapes.

Carter detains Moreau at the elevator and puts her under the supervision of Dunn. When Dunn hears news of Lisenker's death, Moreau attempts to kill him, but Carter arrives just in time. An intense fight ensues between them, ending with Carter kicking Moreau out of a window to her death. Brandt accuses Carter of compromising the mission in order to get revenge for Hanaway's death. Carter and the team travel to Mumbai where Ethan learns Hendricks is. Jane seduces Indian telecommunications entrepreneur, Brij Nath. Nath takes Carter to a private room where Carter then manages to get Nath to give her the codes by threatening to break Nath's neck. She joins Brandt and Dunn after getting shot and slightly wounded in a gun fight. When a group of guards start attacking them, Carter manages to place the hard drives back into the servers after Brandt pulls the lever that reactivates the power in the TV station, which allows Ethan to deactivate the nuclear missile from hitting in San Francisco.

Eight weeks later, after recovering from their respective injuries, Ethan offers Carter and the rest of the team a new assignment which Carter accepts without much indecision. However, the agent does not appear in Rogue Nation for unknown reasons.

Jane Carter was a skilled and excellent field agent who could hold her own against others, notably in Budapest and Dubai. After Hanaway's death, she became motivated and vengeful to kill Moreau without hesitance. Despite her need for revenge, she did follow Hunt's orders to apprehend Moreau.

Jane Carter was a skilled marksman and hand-to-hand combatant, showing these attributes in Budapest and Dubai. 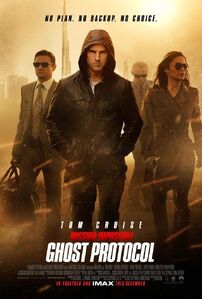 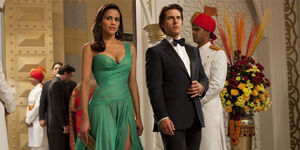 Retrieved from "https://hero.fandom.com/wiki/Jane_Carter?oldid=2153939"
Community content is available under CC-BY-SA unless otherwise noted.