She is the wife of Hank Pym and mother of Hope van Dyne, who took the mantle Wasp after stopping Darren Cross. Janet became an agent of S.H.I.E.L.D. and partner of Hank during the 1980s, and later sacrificed herself by going sub-atomic to prevent a missile from hitting the United States. Though believed dead, Janet was still alive within the quantum realm and managed to reach out to Hank and Hope to escape.

Paul Rudd (who portrays Ant-Man in the series, and also played Tommy Doyle in Halloween: The Curse of Michael Myers, and voiced Mr. Prince in The Little Prince), also played the character when he was possessed by her in said film.

Janet van Dyne married Hank Pym, a scientist who developed a way to shrink things and objects and become a superhero named Ant-Man. Fascinated and wanting to help Hank, she convinced him to let be his sidekick and developed a suit of her own, taking the mantle Wasp. Together, they had a daughter named Hope van Dyne in the late 1970s to early 1980s. Janet and Hank didn't spend much time with Hope, as they went on S.H.I.E.L.D. operations and left their daughter with babysitters.

On one mission in 1987 to stop a Soviet ICBM that was heading to the United States, Janet disabled her regulator to shrink herself to fit into the rocket after Hank's regulator was too damaged. Though successful, disabling the regulator shrunk her into the Quantum Realm, trapping her there. Hank told Hope that she died in a plane crash, hiding the truth until she was older when it was time to tell her so. As Janet was in the Quantum Realm, the place changed her and was able to control the molecules and remained stable.

Hank finally told Hope the truth about her mother's "death" in 1987, healing their strained relationship since the incident. After Scott Lang survived being in the Quantum Realm after defeating Yellowjacket, Pym wonders if Janet is sill alive. She slightly appears in the Quantum Realm when Lang is there, hinting she is alive.

In 2018, a doorway to the Quantum Realm was opened, and Janet managed to entangle with Hank's successor, Scott Lang. She made Scott experience a memory of herself, and this led Lang to get back into contact with Hank to tell him about the dream. She later inhabited Scott's body, and began to fix the algorithm in the Quantum Tunnel. After she fixed the tunnel, she briefly reunited with her family before telling them they had two hours to find her, or it would be another century before they could find her.

Janet reunited with Hank in the quantum real, and used her quantum powers to stable Pym's mind. Upon returning, Janet began to fade out due to Ghost extracting quantum energy, thus killing van Dyne in the process. Ant-Man and Wasp were able to stop Ghost and keep Janet from fading, and Janet finally reunited with her daughter. The reunion was interrupted when Ghost got back up, and Janet acknowledged that Ghost was in pain due to her condition. Janet used her quantum powers to stabilize Ava's condition, and realized she could help her. Ant-Man's friend, Luis, entered the building to notify them that the police were on their way, and Scott came up with plan to distract the FBI.

Afterward, Janet and Hank continued their lives together, moving to a tropical beach where they could live peacefully. Janet and her family decided to keep their promise to Bill Foster to find a permanent cure for Ava. Creating a smaller Quantum Tunnel in Luis' van, they planed to send Scott into the tunnel to harvest quantum energy. While counting down to have Scott re-enter after collecting quantum energy, the Pym family suddenly turned into dust due to Thanos having snapped his fingers with the Infinity Stones. Lang was stuck in the quantum realm, unaware of what was happening, and half of humanity was erased from existence.

Scott managed to re-enter into the world from the quantum realm, but five years passed since the decimation. Scott met with the Avengers, and the group came up with a plan to use Pym particles to time travel, and collect the Infinity Stones. The Pym family were resurrected alongside everyone by Hulk in 2023, as Hope aided Scott and the heroes stop Thanos and his army. Afterward, Janet and her family attended Tony Stark's funeral, honoring his sacrifice to defeat the Mad Titan. 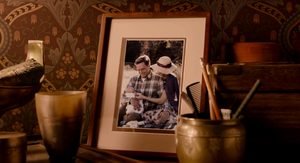 Janet with her husband and daughter. 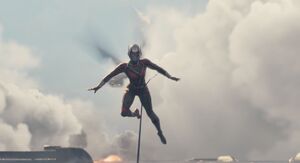 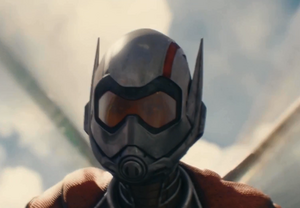 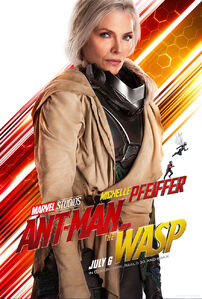 Janet's character poster for Ant-Man and the Wasp.

The Pym family turning into dust.

Janet with her family and Scott, attending Tony Stark's funeral.