Jared Grace is the main protagonist of The Spiderwick Chronicles book series and movie adaptation.

In the film adaption, he is portrayed by Freddie Highmore, who also portrayed Charlie Bucket in Charlie and the Chocolate Factory, Arthur in Arthur and the Invisibles trilogy, Shaun Murphy in The Good Doctor, Norman Bates in The Bates Motel, and also voiced Astro Boy in the titular 2009 animated film and Jimbo Farrar in the U.K. and Irish dub of The Prodigies.

Jared Grace is the black sheep of the Grace family. He lives with his mother, Helen, his twin brother, Simon, and his big sister, Mallory. Jared is nine years old and although he has trouble controlling his anger and is prone to flashes of physical violence, he is remorseful and loves his family dearly. He also follows in his great-uncle Arthur Spiderwick's footsteps and protects his friends, family, and Spiderwick's guide from the wicked ogre Mulgarath.

When he moved into the old Spiderwick estate with his family, Jared found the secret study in the house using a dumbwaiter and a note with a poem leading him to finding Arthur Spiderwick's Field Guide To The Fantastical World Around You. Little did he know, the book was cause trouble for him and his siblings. When Simon was captured by goblins, Jared, along with Mallory, entered the goblin camp and rescued him while also befriending Hogsqueal, a hobgoblin who gave the Grace children the Sight by spitting in their eyes. Jared helped Simon save a griffin from the goblin camp and place it in the carriage house so Simon could nurse the griffin back to health.

While Mallory and Simon wanted to get rid of the field guide, Jared suggested that they visit Aunt Lucinda to get her opinion. However, Thimbletack had stolen the guide from Jared to keep it safe. Later that day, they visited a grove that was inhabited by elves, who wanted Arthur's field guide to keep it safe from Mulgarath. They decided to keep Jared (mistaking him for Simon) until his siblings could retrieve the guide. After his siblings left the grove, Jared convinced the elves to let him go by proving he was really Jared by showing them his initials sewn into his backpack. He then ran home after he was released from the leaves.

Two weeks later, Jared along with his family, attended Mallory's first fencing match at the new school. He noticed a girl looking through Mallory's bag during the match who then shapeshifted into him. In the hallway, Jared confronted the Not-Jared with his pocketknife, but Not-Jared turned into a little boy when the vice principal was walking their way and ran away, crying. Jared was expelled for bringing a knife to school and both he and Simon went to find Mallory, who had been kidnapped by dwarves to trade for the field guide. They took one of Jared's school textbooks and headed to the old stone quarry, where they were captured by the dwarves. They traded the book for Mallory, who was placed in a glass coffin to keep her from aging. Once placed in the dwarves' treasure room, they escaped their cage, took Mallory out of the case and the three siblings managed to escape the dwarf caves with the help of a Knocker. Once outside, they witnessed Mulgarath and his goblins killing the dwarves before hurrying home to convince their mom about the Faeries.

Once home, they found the house ransacked as Mulgarath and his goblins had taken their mom and the field guide. Hogsqueal, who was found on the roof, revealed that Mulgarath's palace was in a junkyard on the edge of town. Jared headed to the elven grove and convinced the elves to let him speak to Arthur Spiderwick. Arthur revealed helpful bits of information about goblins, dragons, and ogres. Once at the junkyard, Jared and his siblings fought the goblins, defeated the dragons, and entered the castle, where they found both their parents. Jared figured out that Mulgarath was portraying their father to trick them. Mulgarath threatened to kill Simon and Mallory by throwing them into his moat of metal and glass if he did not surrender. Jared got Mulgarath to brag about his plan while Thimbletack tied chains around Mallory and Simon. Once his siblings were dropped over the balcony, Jared grabbed Mallory's sword and plunged it into Mulgarath's foot. He then pulled a chain to make the ogre lose his balance and fall over the balcony. Mulgarath turned into a bird and was eaten by Hogsqueal, who had a craving for birds. Weeks later, Aunt Lucinda moved into the house and they all brought the field guide to the elves in the grove. In exchange, the family was given the book back and Arthur was released from captivity. Arthur decided to move on and stepped on the ground, turning into dust and ashes, after which the family headed home.

Jared Grace in the book series. 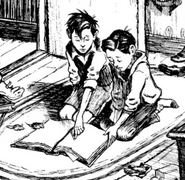 Jared with Simon and Mallory.

Jared with Mallory and Thimbletack.

Grace twins with their mother.

Jared and Simon in the film.