Clan member
Leader of the Hyena Resistance
Queen of the Outlands

Having fun with Kion

Jasiri is a hyena cub who serves as a recurring character in the 2016 Disney Junior series The Lion Guard, making her first appearance "Never Judge a Hyena by It's Spots".

She was voiced by Maia Mitchell.

"Never Judge a Hyena by Its Spots"

When Kion gets separated from the rest of The Lion Guard, he finds himself lost in the Outlands. As he desperately seeks Flat Ridge Rock, he is confronted by Jasiri, who teases him for not having noticed her sneak upon him. Kion bristles at this and claims to have known she was there the whole time, but Jasiri continues to poke fun at him.

She catches his attention when she calls him out for being the leader of the Lion Guard, and she points out that his shoulder mark is a dead giveaway. Kion questions if she's a part of Janja's clan, but Jasiri answers ambiguously, asking Kion why he's in the Outlands. Though defensive, Kion tells her that he's hoping to get back to the Pride Lands, and Jasiri points out that he's going the wrong way.

Jasiri takes a distrustful Kion in the direction of Flat Ridge Rock. Along the way, Kion gets stuck in a bush, but he is freed by Jasiri, who teases him for being so foolish. She reveals that most hyenas respect the Circle of Life and voices how similar lions and hyenas really are. Together, she and Kion sing "We're the Same (Sisi Ni Sawa)".

Upon arriving in Janja's territory, Jasiri and Kion part ways. However, when Kion leaves, Janja (whom Jasiri has met before) and his clan arrive and try to attack Jasiri. She is able to easily defeat Cheezi and Chungu, before being pinned down by Janja. Luckily, Kion returns and saves her by using the Roar of the Elders. The Lion Guard arrive and at first think that Jasiri is a threat, but Kion convinces them that she is a friend. Jasiri and Kion then part on good terms, with Jasiri returning to the Outlands while Kion follows his friends back into the Pride Lands.

"Lions of the Outlands"

Jasiri enters the Pride Lands to ask Kion for help as lions have stolen her clan's waterhole. Confused as to why there are lions in the Outlands, Kion agrees to sort out the problem, believing it to be a misunderstanding. After arriving back in the Outlands, Jasiri introduces Kion to her clan, which includes her sister Madoa and two pups named Tunu and Wema, who cower at the sight of Kion as according to Madoa, they have only ever met bad lions.

Jasiri and Kion then leave to see the lions in their territory, where a teenage lion named Nuka tackles Jasiri to the ground and reminding her that she was told to stay out, before Kion comes to his friend's aid and tackles Nuka. Just then, Nuka's younger brother Kovu arrives, causing the former to declare that it is now two against one, but Jasiri joins Kion and says that it is two against two. After Kion learns that Kovu and Nuka's family aren't welcome in the Pride Lands, he says that he is sure that his father Simba will let them back, to which the two lions take him and Jasiri to see their mother Zira.

After Zira goes to have a private conversation with Kion, Jasiri remains with Nuka, Kovu and their sister Vitani. Nuka eventually becomes impatient and tries to attack Jasiri, but is stopped by Kovu, as Zira didn't want any fights happening whilst she was away. Nuka tries again but stops when Zira returns and claims that Kion has agreed to let her pride the Outsiders keep the waterhole, before telling Jasiri to leave and never come back. After leaving the waterhole, Jasiri runs into the Lion Guard, who tell her about Zira's true nature.

"Rescue In The Outlands"

Jasiri is first seen confronting Janja, Cheezi and Chungu after they enter her territory, resulting in a fight. Despite being outnumbered, Jasiri is able to defeat the trio and force them to retreat.

She is later seen playing with Madoa, Tunu and Wema. However, Janja and his clan arrive and knock Jasiri, Tunu and Wema into an open steam vent. This is witnessed by Madoa, who leaves to alert The Lion Guard.

After The Lion Guard deafeat Janja's Clan, Beshte pushes a slab of rock into the vent for the tree hyenas to climb onto, due to the vent filling with lava. After Janja swears vengence and flees, Jasiri notices that the clan's attack was more aggressive and personal than before, which Kion thinks it was because of the dry season (unaware that the clan were ordered to carry out the attack by the spirit of Kion's evil great-uncle Scar). Following this, Jasiri and the pups part ways with The Lion Guard.

After learning of Scar's return, Jasiri is given an offer by Kion for her and her clan to live in the Pride Lands for safety, but Jasiri states that the clan cannot abandon the Outlands. Instead, Jasiri and her clan form a resistance to help the Lion Guard fight Scar's army.

Near the end of the episode, Jasiri saves Janja from falling into a fiery pit, much to the latter's surprise. Jasiri states that it is because she help any hyena in trouble and offers him to join the resistance. After some hesitation, Janja turns down the offer, to which Jasiri replies "We'll see".

"Battle for the Pride Lands"

Some time after the events of "The Hyena Resistance", Jasiri aids the Lion Guard in their battle against Scar and his army. One day, Simba declares that it is time to defeat Scar and his followers once and for all. Jasiri (who at some point between the events of "The Hyena Resistance" and this episode, met Simba, who accepted her friendship with Kion and that she was a good hyena who respected the Circle of Life) says her clan will help.

Jasiri later leads the other Prideland Animals against Scar's army whilst the Lion Guard confront Scar.

After Scar is defeated, Janja suggests that Jasiri becomes the new leader of the Outlanders (including the members of Scar's army who have reformed). 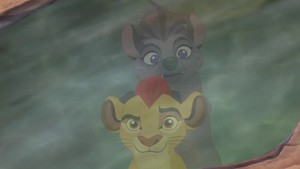 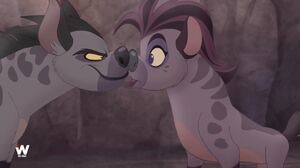 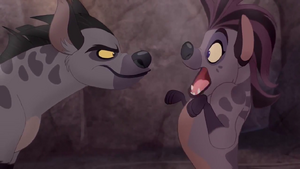 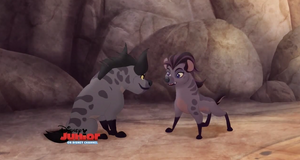 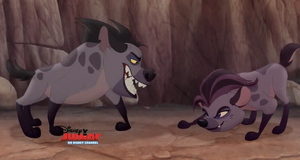 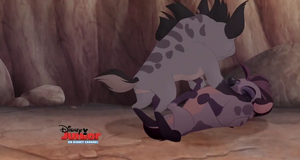 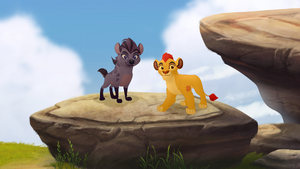 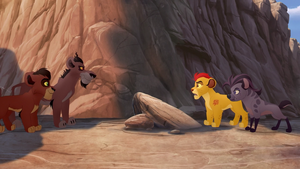 Jasiri with Kion, Kovu and Nuka 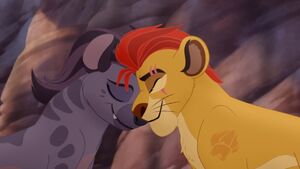 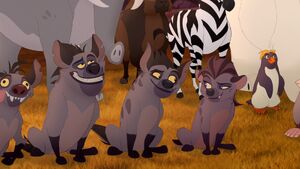 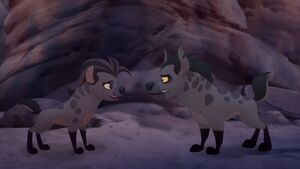 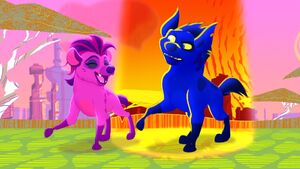 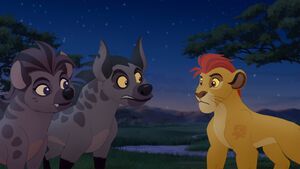 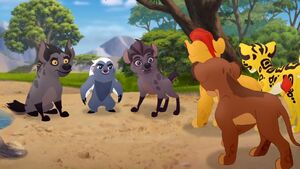 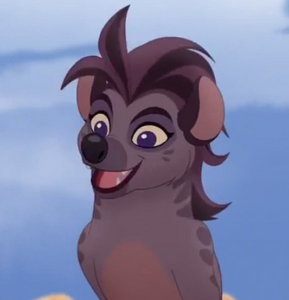