Tending to her Amphy and the Lighthouse it operates.

Jasmine (Japanese: ミカン Mikan) is one of the eight gym leaders of the Johto Region in Pokémon Gold, Silver, Crystal, HeartGold, and SoulSilver. She is the gym leader of Olivine City, who specializes in Steel-type  Pokémon.

She is voiced by Tara Sands in the original anime, and later by Alyson Leigh Rosenfeld in the Diamond and Pearl anime.

As Brock notes in the Anime, Jasmine wears notably simple attire compared to most gym leaders.

Her original outfit from Pokémon Gold, Silver, Crystal, and the anime consisted of a simple white, spaghetti-strap dress with a large bow at the center of her chest and a pair of white, ankle-strap sandals.

In HeartGold and SoulSilver, as well as the Diamond & Pearl anime series, she wears a more elegant outfit consisting of a mint-colored dress with a white jacket with a large red bow at the center of her chest, and a pair of white sandals with mint-colored pearls at the center of the straps.

Jasmine is notably calm and collective for a gym leader, but also is shown to to have diffculty determining what we will say; this trait however is absent in her anime counterpart, as Jasmine has no trouble speaking.  She is also notably naive and less ambitious than most others. During battle or conflict, she tends to be rather optimistic and determined, and is not afraid of any threats that get in her way.

Jasmine is also very caring to her friends and Pokémon, as she is willing to temporarily step down from her role as gym leader to tend to her sick or injured friends.

Similar to Cynthia, she has been shown to periodically leave her respective gym to tend to other personal and recreational matters, such as keeping Glitter Lighthouse operational for passing ships.

Jasmine is the sixth gym leader that the player meets in chronological order.

Upon first meeting her, Jasmine will refuse to battle the player as she is too busy tending to her Ampharos named "Amphy" who is too sick unable to operate Glitter Lighthouse and is committed to healing her back to full health before returning to her gym in Olivine City. She will task the player to find a special medicine available in the Cianwood City pharmacy and return it to her so that she can full Amphy. Once the task is completed, Jasmine thanks the player and returns to Olivine City and resumes her role as gym leader.

In HeartGold and SoulSilver, she can be fought multiple times at Saffron City's fighting dojo.

Jasmine first appears in the episode  Fight for the Light!, where she interrupts Ash's battle with her apprentice Janina (who was impersonating her at the time). She dismisses Janina and apologizes to Ash, before promising to battle him eventually, as she is unable to at the time being. Like the game, her Ampharos at Shining Lighthouse is too sick to operate the structure.

Ash and his friends travel to Shining Lighthouse, where they meet up with Jasmine, alongside her grandfather Myron and her sick Ampharos named Sparkle ( rather than Amphy as in the games). After an incident with Team Rocket which forces everyone to retreat after James' wheezing smogs the structure, Jasmine tasks Ash and his friends, alongside her reformed apprentice Janina to travel to Cianwood City and retrieve the medicine needed to heal Sparkle.

After a suggestion by Chuck, the gym leader of Cianwood City to take a shortcut through the Whirl Islands, Ash and his friends return the medicine to Jasmine in time for her much anticipated match with Ash. The match is delayed when Team Rocket attempts to kidnap Pikachu, but Jasmine helps Ash rescue him, and send the kidnappers blasting off again respectfully.

During her gym battle with Ash, Jasmine sent out her Magnemite to battle Ash's Pikachu for the first round. Initially, Ash had the upper hand, as Pikachu was able to defeat Jasmine's Magnemite, however in the process, Pikachu became too exhausted, as was defeated by Jasmine's second Pokémon Steelix. During the final round, in which Ash used his Cyndaquil to battle Steelix, both Pokémon were evenly matched, however it was Cyndaquil who prevailed and defeated Steelix by using flamethrower to turn Steelix's sandstorm into a fire whirl, causing Steelix to instantly faint.

Afterwards, Jasmine congratulated Ash and gave him the Mineral Badge.

After a long absence, Jasmine finally returned in the episode Four Roads Diverged in a Pokémon Port!, where she reunited with Ash and Brock, and met their friend Dawn during a Pokémon Contest. She asks Flint of the Shinnoh League's Elite Four to battle her, to which the latter accepted.

After her battle with Flint, Jasmine rejoined Ash and his friends at the nearby Pokémon center. There, she told Dawn about the fears she came across as being a gym leader, but ultimately assured her that everyone must always follow their own path.

The following day, Jasmine parted ways with her friends, telling them that she must return to the Olivine Gym and resume her position as gym leader, but not without telling her friends that she enjoyed the time she spent with them together.

Jasmine in the original anime. 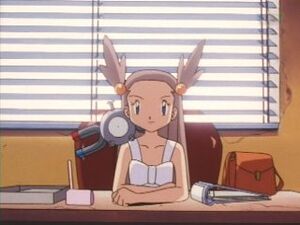 Jasmine with her Magnemite 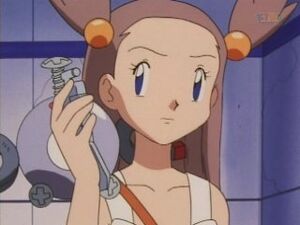 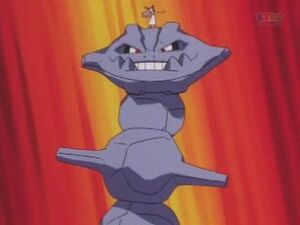 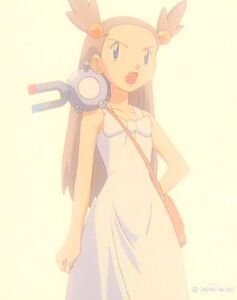 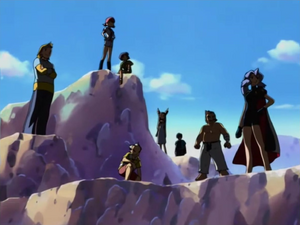 Jasmine's silhouette (center), alongside the other Johto Gym Leaders. 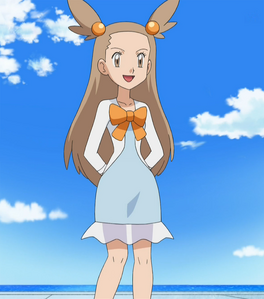 Jasmine in the Diamond and Pearl anime series 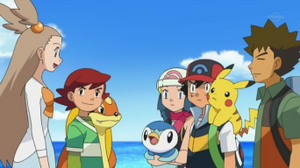 Jasmine reuniting with her old friends Ash and Brock, and meeting their friend Dawn
Add a photo to this gallery

Retrieved from "https://hero.fandom.com/wiki/Jasmine_(Pok%C3%A9mon)?oldid=1709482"
Community content is available under CC-BY-SA unless otherwise noted.