To defeat Gaea and the Giants (succeeded)

Jason Grace was the Roman demigod son of Jupiter (Roman God of the Sky) and the late actress Beryl Grace, the younger brother of Thalia Grace (whom Beryl had with Jupiter's Greek form Zeus), the former co-praetor of Camp Jupiter, the Counsellor of Cabin 1 at Camp Half-Blood, the former boyfriend of Piper McLean and one of the protagonists of the 2010-2014 Greco-Roman mythology book series The Heroes of Olympus (the sequel series to the 2005-2009 Greek mythology book series Percy Jackson and the Olympians) and a supporting character in The Trials of Apollo book "The Burning Maze".

Jason was born to Jupiter and Beryl Grace (an 80s TV starlet) 7 years after the birth of his sister Thalia, whom Beryl had with Jupiter's Greek form Zeus. Jupiter's wife Juno was angered at her husband's infidelity, but Jupiter was able to appease her by naming his son after the Argonaut Jason, who was Juno's favourite hero, and made her Jason's patron. After staying for some time, Jupiter left the Grace family to return to his godly duties as he had done previously as Zeus (and also because Beryl kept wanting him to make her immortal, eternally beautiful and to take her to Olympus). Afterwards, Beryl became unstable, causing Thalia (who wished to leave home) to stay to care for Jason as she didn't trust her mother to look after him properly.

Two years later, Beryl took Jason and Thalia on vacation to Sonoma Valley where she told Thalia to get the picnic basket from the car. However whilst Thalia was away, Beryl gave Jason to Juno as a peace offering, before telling Thalia, after she returned, that Jason was dead. Juno then took Jason to The Wolf House (where Roman demigods begin their training) and gave him to a wolf named Lupa (who was also the same wolf who raised Romulus and Remus), who trained him to be a demigod. After Jason completed his training, Lupa sent him to Camp Jupiter (a training camp for Roman demigods) in San Fransisco, where he eventually became the camp's co-praetor alongside Reyna Ramírez-Arellano. Whilst Jason was at Camp Jupiter, he was unaware of Thaila leaving home (after falling out with Beryl over his supposed death) and his mother's death by drink driving.

When the Titans attacked America, Jason led an army from Camp Jupiter to attack the Titans' base on Mount Othrys where Jason defeated a Titan named Krios with his bare hands before toppling the Titans' leader Kronos' throne. Jason and his army were led to believe that Kronos disappeared after the destruction of his throne and base, unaware that he was defeated by his host Luke Castellan, during the Titans battle against the Greek demigods of Camp Half-Blood (a training camp for the children of the Greek gods).

Some point later, Hera (Juno's Greek form) took Jason from Camp Jupiter and erased some of his memories and placed him in a bus for The Wilderness School in an attempt to get him to Camp Half-Blood to earn the trust of the Greek demigods so eventually, they and the Roman demigods would join forces to battle the Giants.

Jason wakes up in the bus with two of the school's students Piper McLean and Leo Valdez, who claim to be Jason's girlfriend and best friend. Gradually, Jason's memories start to retun (e.g. remembering his sister Thalia and Camp Jupiter).

Thoughout this series, Jason, along with Piper, Leo, Percy Jackson, Annabeth Chase, Frank Zhang and Hazel Levesque, travels in a ship called The Argo II to travel to Greece to stop the Giants from reawakening Gaia and to also prevent a war between Camp Half-Blood and Camp Jupiter. They succeed and the two camps become allies.

Jason makes an appearance in the third book "The Burning Maze", where he along with Piper (whom he has since broken up with), aids Apollo and Meg McCaffrey battle Caligula (a member of Triumvate Holdings, a trio of Rome's worst emperors). He is run through with a spear by Caligula. 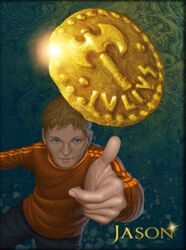 Fan Art of Jason Grace
Add a photo to this gallery
Retrieved from "https://hero.fandom.com/wiki/Jason_Grace?oldid=1915609"
Community content is available under CC-BY-SA unless otherwise noted.