Jassky is a heroine from Hero of Robots. She is the elite of the Salamanders and an elder sister of Addisso. She is the pilot of Vermillion Bird.

Jassky is a charismatic woman, who has a great sense of mindfulness. She provides a family love for her brother Addisso. Jassky needs to supportive help by assisting him during battles.

The elder sister of Fire God pilot Adesso. The greatest pilot of the Salamanders. Unlike her temperamental people, she can control the flames with a clear head. 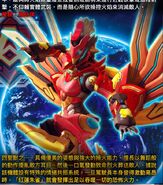 Retrieved from "https://hero.fandom.com/wiki/Jassky?oldid=1704346"
Community content is available under CC-BY-SA unless otherwise noted.