Jaune Arc is a major character from the RWBY franchise, serving as a deuteragonist in the American animated webseries RWBY, its Japanese manga prequel/adaptation, comic book series by DC Comics, and video game spinoffs RWBY: Grimm Eclipse and RWBY: Arrowfell. He is a Huntsman and the former leader of Team JNPR, and a major ally of Team RWBY.

He is voiced by Miles Luna, who also voiced David in Camp Camp.

Jaune is a very tall, muscular man with blonde hair and dark blue eyes. His attire almost always consists of a dark blue Pumpkin Pete hoodie and jeans, with a brown belt and gloves. He wears white and gold armor, primarily a chestplate, rerebraces, and elbow pads. Following the death of his love interest Pyrrha Nikos, he wore a red sash around his waist.

Jaune began his time at Beacon as a goofy, lighthearted individual who liked to crack jokes, flirt, and otherwise socialize. He had an incredible amount of confidence, and never let any setbacks lower his self-image. Despite that, he was meek and mild around bullies before getting a confidence boost from Pyrrha that aided him in trusting himself and his abilities more. From his early days in Beacon, he showed himself to be a tactical and strategic genius.

However, after the Fall of Beacon, Jaune's personality changed to be far more stoic and serious. Though he retained his confidence and tactical knowledge, he became prone to bursts of rage and sorrow, especially when confronted by those responsible. His care for his allies never faltered, though he tends to be more aggressive and focused on his greater goals.

Jaune is a talented swordsman following training from Beacon Academy and Pyrrha Nikos. His weapon, Crocea Mors, is a sword and shield that Jaune uses to great effect. Following the Fall of Beacon, he upgraded his weapons to combine with each other, creating a powerful two-handed greatsword that he can use with the same proficiency as his one-handed blade and shield. His shield has also been modified with Hard Light Dust to extend if needed. Additionally, following training from Professor Ozpin, he is proficient at hand-to-hand combat as well.

Jaune unlocked his Semblance, a power unique to him and tied to his soul, during the Battle of Haven. His Semblance, called Aura Amp, allows him to amplify another's Aura and Semblance with his own through physical contact. When he is in contact with another, he can amplify the defensive and healing properties of thier Aura, making it capable of withstanding far greater force than usual or allowing it to heal much more egregious, potentially life-threatening injuries as opposed to normally only being able to heal minor wounds. If applicable, the subject's Semblance is also amplified, increasing its effectiveness, strength, range, or speed.

Jaune himself possesses an Aura, which he unlocked during Beacon Initiation with help from Pyrrha. His Aura is a physical defense generated by his soul. This durable field is invisible except when it is overtaxed, where it flashes yellow. His Aura defends her from attack and can even heal minor wounds, but if it takes too much damage it will become depleted and require time to return. According to Pyrrha, Jaune has a considerable amount of power in his Aura, likely tied to his Semblance, which allows him to use his own Aura to amplify others'.

One of Jaune's most praised abilities among his peers is his high level of intelligence and strategical and tactical genius. He is able to formulate winning strategies and plans while in action, and is also regarded as an excellent leader and coordinator. Under his lead, his teams JNPR and the short-lived RNJR were combat specialists able to take down large and dangerous foes with ease.

Jaune is also revealed to be a surprisingly adept dancer, able to do so even while wearing a dress. 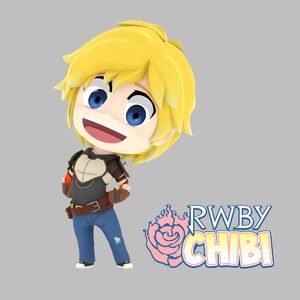 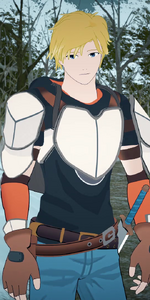 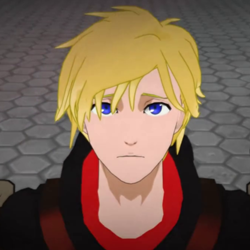 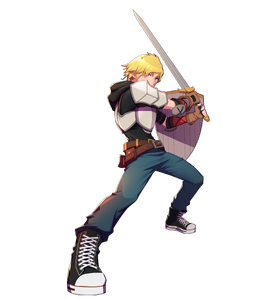 Jaune as he appeared in RWBY: Amity Arena. 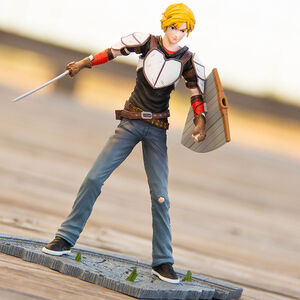