Note: This article is about the incarnation of Jax from the Mortal Kombat Legends films. The mainstream version can be found here: Jax Briggs (Mortal Kombat).

Commanding enforcers in the organization.
Fighting.
Hanging out with Sonya and his friends.

He is voiced by Ike Amadi, who also voiced Cyrax in Mortal Kombat 11.

During Shang Tsung hosted the first Mortal Kombat tournament, Liu Kang along with the Earthrealm warriors, Sonya, Raiden, and Johnny Cage traveling to Shang Tsung's Island, they enters the throne room watched the competitors into training and toasts. Jax is captured by Kano and the Masked guards, which he can forced up to the battle against Shang Tsung's minion, Goro, thereupon had for the sorcerer, who watching their match as he hoping to gives a chance, lets making Goro wins. His partner, Sonya, is very sad by sees him to be defeated, and but, his arms were completed ripped by Goro. A suddenly of this way, Raiden, an thunder god who have suggestion of thought Sonya's dismay.

He showed to help with spared in order to stop Shang Tsung from executed Jax because of that the tournament was did not starting yet. After he cures Jax's wounds, Shang Tsung decides to taking him the prisoner, sending all the fighters battling each other in the island. Hanzo Hasashi, a ninja who is leader of Shirai Ryu but the way, upon his family and clan are destroyed by Quan Chi, a sorcerer who disguised as Sub-Zero, which he gains all the powers of massing kill him. As the reason, Quan Chi would revived Hanzo in Netherrealm as a spectre, puts his nicknamed called "Scorpion" and to serves him. Johnny arrived in an abandoned fortress to defeated Baraka, Sonya sent to the swamp to kill Reptile.

Scorpion killing Lin Kuei warriors when he arriving in the forest, and Liu Kang, who sending into Shang Tsung's garden by facing Kitana, a princess of Edenia. When Liu Kang enters the throne room but he wants to facing Goro, Raiden, Quan Chi, and Shang Tsung watching them to having match. Be this, Liu Kang almost be in setback as the same fate as Jax as he facing Goro. Unluckily, Quan Chi attempting to poisoning Shang Tsung with the cup, which they have their victory toasts and Goro speed the success to beat Liu Kang, as leading them dishonor, allowing to the cruelly. Although Shang Tsung saw the cup was poisoned, dump his drink on the ground.

He don't believing this and captured Quan Chi with his magic, taunting him about his loyalty to the fallen god, Shinnok. Jax was in the torture chamber, and unease to be attacked by Kano. He noticed that Sonya and Johnny appearing to fights a horde of Outworlders and Kano, while their struggle were becomes too serious. Afterwards, they managing to defeated them and saved Jax. Jax eventually frees up, which he overly to get rid of Kano, killed him and stepped his head with the foot, leaving together with Johnny and Sonya. Scorpion arrived in the throne room, he coming to saving Liu Kang, slaying Goro with his kunai.

Shang Tsung will have Scorpion to fights with Liu Kang, making him to wins. Scorpion don't want hurting Liu Kang due to he rescued him from Goro's assault. Upon his refused, Scorpion teleporting to blackmailed Shang Tsung about that gives him the key, until their objection, which makes Liu Kang as the winner of tournament, and forcing the sorcerer leaving to Outworld. Before Shang Tsung's island was crumble, Jax and the Earthrealm warriors get ready takes the ship to left, Scorpion stayed behind for it, he taking avenging on his family and clan, which brutality to killing Quan Chi.

When Jax and Kurtis Stryker are pilot the helicopter arrives in Wuxi temple, they joined the attack all the forces of Outworld lead by the tyrannical emperor, Shao Kahn. In fact, a new Mortal Kombat tournament was taking place in Outworld, Shao Kahn begins at the wars as he worked with his minions, greatly counterattack to Earthrealm. With the helped of Shaolin monk, Kung Lao, to resistance of the monsters. He using his bionic arms based on guns killing them off, and by that hurry evaded their strikes. Together with Kung Lao and Stryker, Jax always wants to stayed in the temple, waited Liu Kang, Sonya, Raiden, and the other warriors to arrival.

A few hours later, he formed Earthrealm's opposition with them, stand up against the Outworld's hostile. During their arriving in Outworld, the Earthrealm warriors were greeted by Shao Kahn but they agrees setting more times to joining the tournament. Entering the Kahn's Koliseum, Jax, Johnny, Sonya, Kung Lao, Liu Kang, and Stryker faced the contestants of Shao Kahn, inculding Li Mei, Baraka, Reiko, D'Vorah, Kintaro, and Jade. Upon his anger, he killing Kintaro and ripped off his arms, Johnny is defeated by D'Vorah. However, Liu Kang was deal with Jade, Sonya is deals with Li Mei and D'Vorah, Stryker is dealing with Baraka and accidentally killed by Shang Tsung. Kung Lao, who facing Shao Kahn then murdered by him.

Jax and Sonya are failed against the emperor, Kitana match to Raiden as she about to kill him. Since to have rejected, she later turns into against Shao Kahn as punishment for the tyranny. Under his dictatorship, Shao Kahn imprisoned Kitana from being betraying him and eventually fighting with Raiden, killed him puts the horrible. Liu Kang grieves of mourned the thunder god, which he actually to remembers that the memory. He confronted Shao Kahn, finishing to killing him and becomes a winner by the Elder Gods. As now, Kitana also be saving. Jax later helps Liu Kang and all the warriors to stop Shinnok for his merging with the power of One Being and all the realms to destroying all.

However, Liu Kang becoming Raiden's chosen one, he transforming into a giant dragon. Empowered by the powers of the Elder Gods, Liu Kang opposed to Shinnok, he defeating him under his efforts. After Shinnok's destroyed, Liu Kang then drawed the powers of One Being, which having spread back, and also separated all the realms into a normal state, including Edenia. Returning to Koliseum, Jax sees Liu Kang hugs with Kitana as well as Sonya kissing Johnny, but even happening is Raiden would be resurrection with godhood, watched them and leaves with lightning of the sky, until the conclusion. 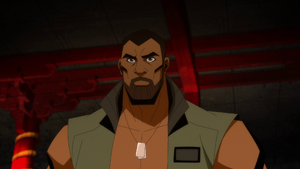 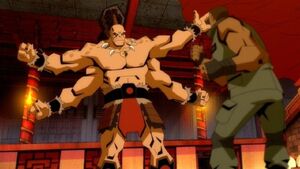 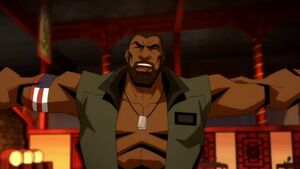