To be with Miryea Mendez (succeeded; prior to her death).

Vengeful
Friend of a Villain
In Love

Michael J. "Jay" Cochran is the main protagonist of the 1990 film, Revenge.

He is portrayed by Kevin Costner.

Jay is a retiring United States Naval Aviator who, after 12 years in the service, wants to relax and live one day at a time. He goes to Mexico, accepting a matched pair of Beretta shotguns and an invitation from his wealthy friend Tiburon "Tibey" Mendez to spend time at his hacienda in Mexico. Tibey is a powerful crime boss, constantly surrounded by bodyguards.

While trying to find the hacienda, Cochran meets a beautiful young woman riding a horse. She is Tibey's wife, Miryea, who lives in lavish surroundings but is unhappy because her much-older husband does not want children, feeling pregnancy would spoil her looks.

Jay is a welcome guest and presents his friend with a Navy G-1 leather flight jacket. But he rubs Tibey's suspicious right-hand man Cesar the wrong way by behaving independently and not acting like an employee. After a dinner Tibey conducts a private meeting with business associates while Miryea gets acquainted with Jay. She becomes attracted to him. The next day they share a private walk on the beach.

During a party, with Tibey and his men nearby, Jay and Miryea secretly have sex. Tension grows, as Jay is worried that Tibey will become aware of the situation. Miryea begs Jay not to leave. They arrange a secret rendezvous, Miryea pretending that she will be visiting a friend in Miami when she actually is going to accompany Jay to a remote cabin.

Cesar overhears a conversation in which Miryea asks her Miami friend to lie for her. Tibey visits Jay and invites him on a trip to the Beretta factory to custom-fit his new guns, but Jay declines. Tibey tells his friend goodbye. At the airport, Tibey also gives Miryea one last kiss. Jay is secretly waiting to drive her to the cabin.

At their hideaway, they are surprised by Tibey and his men. Jay's beloved dog is shot dead. Calling Miryea a "faithless whore", Tibey strikes her and cuts her across the mouth with a knife, as Tibey's henchmen viciously beat and kick Jay. After setting fire to the cabin, they dump Jay in the desert, and leave him to die.

Miryea is placed in a whorehouse, where she is drugged, abused, and relegated to "common use". The young man responsible for keeping her drugged has AIDS. As Miryea no longer wishes to live the life of a common prostitute, she persuades him to share a needle with her, thus infecting her.

Jay's unconscious body is discovered by a Mexican Good Samaritan, who slowly nurses him back to health. He returns to the burnt cabin and retrieves some money he had stashed away. His rescuer drives Jay to town and gives him a knife to "cut the balls off your enemy". He encounters a Texan delivering a horse, who offers Jay a ride in his car. Inside a cantina, Jay notices one of the thugs who had thrashed him; he follows him into the men's room and cuts his throat.

After a day on the road, the Texan, clearly ill, trades his horse to a wealthy man, who recognizes Jay from an afternoon at Tibey's estate. The friendly Texan dies in his car, apparently of tuberculosis.

At a motel, Jay runs across Amador, the brother-in-law of the Mexican Good Samaritan who had saved his life. Amador and his quiet friend, Ignacio, have their own issues with Tibey Mendez and are willing to help. They capture another of Tibey's henchmen, who tells them where Miryea can be found. Jay barges into the brothel to rescue her, only to find that she has been moved. No one but Tibey knows where she is.

Jay, Amador, and Ignacio ambush Tibey and his bodyguard on a trail. Jay is here for revenge, but first Tibey requests that Jay ask forgiveness for having stolen his wife.

Miryea is in a convent hospice, dying of AIDS. Jay arrives in time to tell Miryea that he loves her. He then carries her outside, Miryea then tells Jay that she loves him; moments before she dies in his arms. 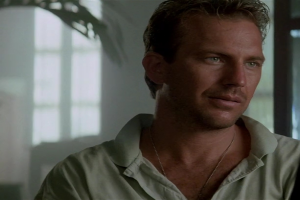 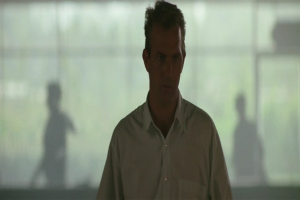 Retrieved from "https://hero.fandom.com/wiki/Jay_Cochran?oldid=1719144"
Community content is available under CC-BY-SA unless otherwise noted.