Jazmine Dubois is a major character in the Boondocks. She is a 10-year-old bi-racial daughter of the Dubois family and a classmate of Huey.

Jazmine is a smart and honest girl whose age typical naïvete and innocence—not to mention mixed ethnicity makes her an object of ridicule for Huey and Riley (although this played up much less prominently in the cartoon). She is the most prominent child in the show other than the freeman boys, and she and Huey spend a great deal of time together. Although, in "The Block is Hot" Huey saved Jazmine one time from being forced to work very hard on a lemonade stand, in order to have a pony, for Ed Wuncler I. Jazmine is also portrayed to be a great animal-lover, and has stated that she aspires to be a veterinarian. She may be a vegetarian as well, given her statement (during " the fried chicken flu") that fried chicken is murder. 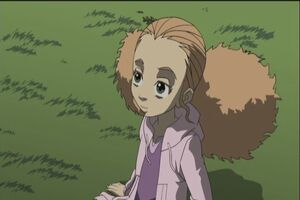 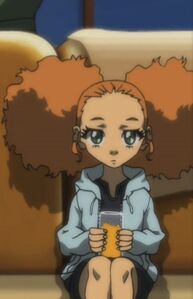