Jeanie/Jean-boy (by his mother and Eren Yeager)

Soldier of the Survey Corps

Protect humanity from the Titans (succeeded).

Jean Kirstein is a major supporting protagonist in the anime/manga series Attack on Titan. He is a graduate of the 104th Trainees Squad and graduated in the top ten of his class. Being Eren's rival and often at odds with him, he serves as the series' foil character. A cynical and hot-headed young man, he comes into constant conflict with Eren over their differing ideals. He declares his intention to join the Military Police Brigade, wanting only to live a comfortable and safe life. After the battle of Trost, he abandons his selfish ways, enlisting in the Survey Corps and growing into a capable young leader.

Jean is a young man with spiky, light-brown hair shaved into an undercut style, with the shaved portion being black. He has small, intense light-brown eyes, and is said to have the same vicious look in them as Eren does.

Jean is of average height and muscular build, and has a scowl similar to Eren's but is said to have a long face (a "horse face").[8] He is often seen wearing the typical uniform of the Survey Corps worn with an olive gray button-up shirt. After overthrowing the government, his hair appears slightly longer than before.

His casual attire mostly consists of a white button-up shirt, dark pants, and a dark-brown vest. When concealing his identity, he also fashions a cloak and fedora.

Jean's most defining trait is his brutal honesty. He holds no restraint when it comes to speaking his mind, even when he knows it would not be wise to do so or when it could spark conflict. Jean is also pragmatic: he has a strong aversion to exposing himself to dangerous situations, and has openly admitted his desire to join the Military Police is due to wanting an easy and safe life. During his time as a trainee, Jean was extremely hot-headed, easily becoming frustrated and quick to resort to violence when pushed. Jean was also very cynical about defeating the Titans, believing that humanity has no chance against them. He openly mocked more idealistic individuals like Eren, and saw resisting the Titans as a hopeless cause.

Despite his shortcomings, Marco describes Jean as a natural leader, being able to understand others and assess situations well because of his flaws. Indeed, during the Battle of Trost, Jean proves capable of leading his fellow soldiers when they are left confused and leaderless, and rallies Armin and Reiner in an attack on the Female Titan, knowing that not fighting her would endanger the rest of the Survey Corps.

Although he presents himself as self-centered, Jean places high value on the lives of his comrades, and is ashamed and horrified when he must leave helpless allies behind to save himself and others. He was also willing to risk his life even if just to slow down the Female Titan, as refusing to do so would have certainly resulted in countless more deaths. Jean later criticized Erwin's plan of withholding information from his subordinates out fear that there was a spy among them, feeling that the plan did not justify the lives lost because of it. In addition, Jean is greatly averse to taking human lives. Jean's moral principles initially prevented him from killing enemy soldiers, but he would reluctantly set aside his conscience for the sake of his friends.

Jean's first instinct is to always see life through cautious and doubtful eyes. He was hesitant to accept Armin and Reiner's plan of having the Rogue Titan fight for them, and immediately admitted to never having trusted Ymir when she seemingly kidnapped Krista. Despite this, following the second appearance of the Armored Titan, Jean was also the one to motivate Eren to continue fighting for humanity's victory, showing that he is slowly adopting the same idealistic outlooks he once criticized.

As part of the 104th, he ranked in the top ten of its graduates, placing just under Eren Jaeger and coming in at sixth. After the graduation ceremony, he got into an altercation with Eren, who he seems to be very competitive with. As a self-described realist, his ideas and outlook initially conflict with Eren's more idealistic views. He Eren and Jean fight states that he became part of the top ten so that he could join the Military Police and live within the Inner District in relative safety and comfort.

After the second attack of the Colossal Titan, he, like many others, was eventually sent to the front to deal with the titans that had entered the city. However, due to the supply shortage, he was unable to fight at first. With the arrival of Mikasa, he and the rest of the group rush towards the HQ to resupply. When Mikasa runs out of gas, he takes the lead. When another soldier runs out of fuel, he takes advantage of the distracted titans and orders the remainder to finish the remainder of the trip. He second guesses this decision when he realizes that he and the group only made it because he took advantage of the deaths of his teammates.

When he sees the resupply team, he strikes one in anger, telling them they are responsible for the soldiers being killed. Soon after, Mikasa, Armin and Connie arrived with the help of the rogue titan. Still having to deal with the titans in the headquarters, he was in the second group in Armin's plan to clear the supply room.

After resupplying, he stayed back with Reiner and Annie. After Reiner suggested helping the rogue titan out, Jean was hesitant, as they had just barely escaped with their lives and he was unwilling to risk it again for a titan. Fortunately, they didn't have to, when the titan broke itself free in order to attack another titan, collapsing soon after. He ended up being one of the first people to know about Eren's titan transformation, when he emerged from the fallen rogue titan.

It was revealed that during another altercation, Eren upon learning that Jean's behavior was similar to his own at one point, learns to control his emotions as a soldier. After learning one of Annie's techniques in hand-to-hand combat, he uses it on Jean after confronting him for his beliefs.

After finding the body of his friend, Marco, Jean is clearly disturbed. Later after remembering Eren's confrontation, and Marco's compliment about his mental strength; against his own wishes and his fear, Jean joins the Scouting Legion instead of the Military Police.

He was later chosen to pose as Eren because both have similar bad attitudes and eyes.

At Eren's bedside, Jean finally learns about Annie being the Female Titan from Armin and she's encased in a crystal to avoid interrogation. He also finds out that about the titans similar to the Colossal Titan inside the Walls being used due to their hardening abilities. Jean and Armin heads down to the meeting between Commander Irvin Smith and the head of the Military Police.

When Jean reappears and is outraged when he learns of Reiner and Bertholdt's betrayal and their secret correspondence with Annie. He also learns about Ymir being a titan shifter and that both she and Eren are taken hostage. Outraged and determined to stop his traitorous teammates, Jean readily takes his stance with the Scouting Legion, Military Police and Stationary Guard.

He later observes another soldier being devoured by a Titan, noting that it was once again a member of the Military Police. When the troops enter the forest in pursuit of the traitors, he is among the group that encounters Ymir in her Titan form. When she suddenly attacks and kidnaps Historia Reiss by swallowing her, Jean is the one to rally the other soldiers and order them to pursue Ymir into the forest. 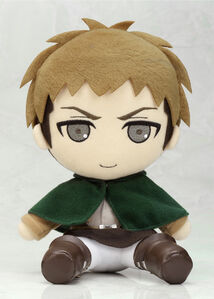 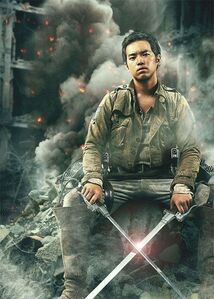 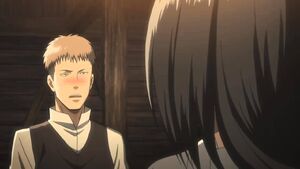 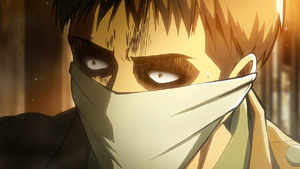 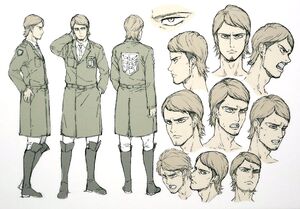 Jean Kirschtein in the upcoming The Final Season. 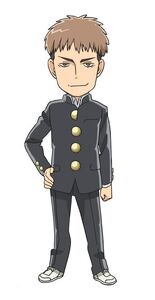 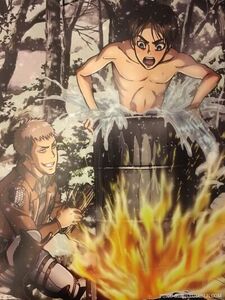 Jean heat up Eren out of jealousy.