Jean Valjean is the protagonist of Victor Hugo's book, Les Miserables and most of its adaptations.

Jean starts out as prisoner whose crime was stealing bread for his sister's children. Originally, he was condemned to five years of imprisonment in the Toulon prison, but his constant attempts to escape made him be punished to 19 years. There, he lost his humanity. After the time passed, he was placed on parole and he had trouble finding a job because of his past. Nobody wanted to receive him but the bishop Myriel, who gives him shelter in the church. However, he stole some silver cutteries and intended to escape. When the police caught him and sent him to the church, the bishop claimed that the silverware were a gif and even gave him his candlesticks. After that, a coin from a boy called Petit Gervais fell. Jean put one of his foot over it and when the boy asked for the money, he refused to give him the coin, so the boy denounced Jean as a thief. When Jean wanted to return the coin to Petit Gervais, the boy had already left. Since that moment, Jean felt remorseful and began to change into a philantrophist.

Years later, Jean has established in Montrieul-Sur-Mer going by the name Monsieur Madeleine. There, he used the money he won by selling the bishop's silverware to create a black glass factory, in order to give work to the poor.

He adopts a girl named Cosette after her mother Fantine passes away. Cosette grows up and falls in love with the revolutionary Marius Pontmercy. He is unsure about him at first but then during the fight he saves Marius without caring if he himself died. He also frees Javert which led him to commit suicide. Valjean eventually passes away peacefully and his soul ascends straight to heaven 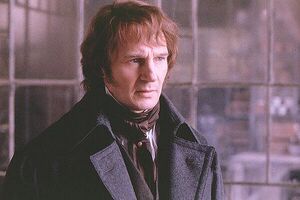 Jean Valjean in the 1998 film, portrayed by Liam Neeson 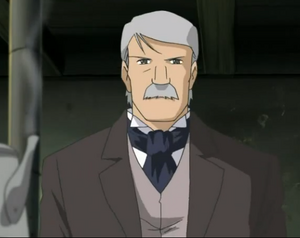 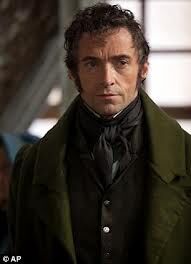 Add a photo to this gallery
Retrieved from "https://hero.fandom.com/wiki/Jean_Valjean?oldid=2238362"
Community content is available under CC-BY-SA unless otherwise noted.