Fighting and killing angels.
Shopping.
Teaching her students about the history of Umbra Witches and Lumen Sages.

Madama Styx (the demoness she made a pact with)

Jeanne is the secondary antagonist-turned-deuteragonist of the video game Bayonetta. She is one of the last two descendants of the near-extinct Umbra Witch and Bayonetta's former rival and best friend. It is revealed early on that Jeanne was heiress to the Umbra clan 500 years ago, and her rivalry with Bayonetta has apparently existed for as long. She was brainwashed by Father Balder to be on the side of the angels and converses with most of the four virtues. Jeanne must be defeated four times throughout the game and later on she helps Bayonetta.

She is voiced by Grey DeLise, who also voices Catwoman, Mandy from The Grim Adventures of Billy & Mandy, Wubbzy from Wow! Wow! Wubbzy!

Jeanne is an Umbran Witch, sharing many of the same powers and abilities as Bayonetta such as summoning demons and slowing down time. Like Bayonetta she wields four specially-crafted and enchanted handguns, collectively known as All 4 One, individually as Porthos, Athos, Aramis and D'artagnan, along with a Katana named Angel Slayer.

An enigmatic character, Jeanne reappears time and again to Bayonetta during her journey as both an ally and an enemy, prompting revealing and often seemingly conflicting details of their shared past. 500 years prior to the events of the game, Jeanne was participating in her final trial as heir to the throne of the Umbran Clan, and chose to disregard the laws and traditions so that she could challenge Bayonetta to combat. Despite losing this battle, Jeanne worked with Bayonetta during the Witch Hunts and against the Laguna, even during the siege of the Umbran sanctuary where Bayonetta's mother was slain. In the midst of the battle she drove a knife into Bayonetta's chest and sealed her away with a red jewel, placing her in a casket at the bottom of a remote lake where she would be awakened centuries later by Antonio Redgrave.

Jeanne's whereabouts were then unknown until she re-encountered Bayonetta in the present day, and near the end of their final battle and the climax of the story it was revealed that Jeanne and Bayonetta were far from enemies in the past; indeed, they had been childhood friends, and Jeanne had sealed Bayonetta away for her own protection. At some point after the event, she had been placed under the control of Balder, the last remaining Lumen Sage and the man who orchestrated both the war that destroyed his own order and the Witch Hunts that brought the Umbra to the brink of extinction. Freed from this control during her last battle with Bayonetta, Jeanne was seemingly killed by a barrage of missiles, and Bayonetta briefly mourned her old friend before setting off for the final battle.

Jeanne is Bayonetta's equal in battle, and similarly fights with four magical pistols, martial arts, and the limbs of a demoness, Madama Styx.

Jeanne is much more serious and proud, holding her status as an Umbra Witch in high regard, and she often concerns herself with the supernatural workings of her world even when no one else does. She regards combat as a fierce, no-nonsense proving ground for skill, and is merciless to her opponents. However, she shows an emotional side sometimes, often being shocked at displays of friendship; she's also a daredevil who thoroughly enjoys performing dangerous stunts on her motorcycle. 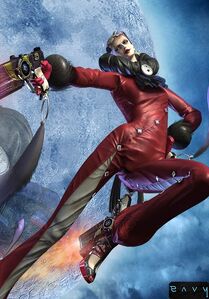 Jeanne in the first Bayonetta game 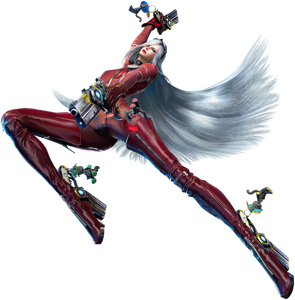 Jeanne as she appears in Bayonetta 2 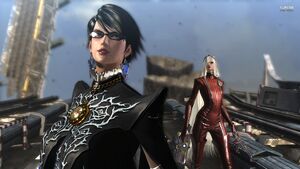 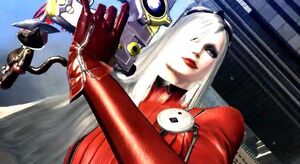 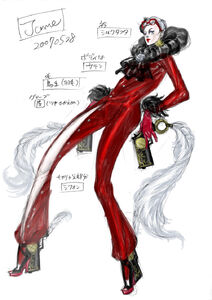 A concept art of Jeanne 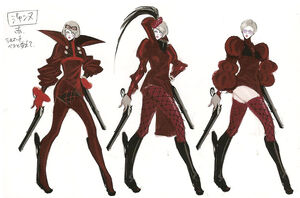 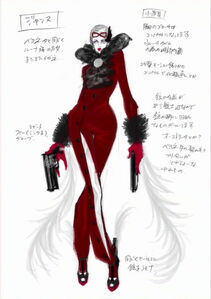 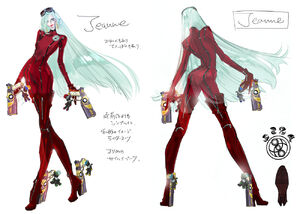 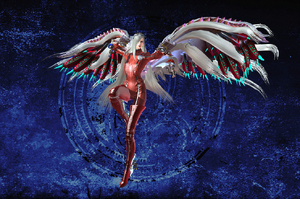 Jeanne with Malphas wings in Bayonetta 2.