Outright Warrior
Jeanne D'Arc is one of the main protagonists from the World Heroes video game series.

Jeanne D'Arc is a swordswoman from the 15th-century France. A bearer of a tremendous beauty, she roamed her land in search of a strong fighter to become her husband. However, she continues her search in a different time now.

Alongside seven other warriors from different time periods, Doctor Brown invites Jeanne to the World Heroes tournament. Jeanne was accepts the invitation in hopes of finding a suitable man. She advances through the tournament until she was put against Julius Carn who managed to defeat her. Jeanne is quite gets up and confesses to Julius that she's finally found a man strong enough to defeat her, she aggressively asks for a kiss but Julius runs away while telling her that she's not his type of woman.

She would be enters the second World Heroes tournament with the same goal of finding a suitable man but was once again unsuccessful. After the third World Heroes tournament, she sees Ryoko Izumo fawning over Hanzo Hattori, she becomes irritated but quickly gets over after reassuring herself that she's the queen. Fuuma Kotaro approaches Jeanne and flirts with her, but Jeanne rejects his attempt by knocking him out.

Jeanne (Janne) is known for her absolutely politeness and honor given by the trial of battle, She is compassive, empathetic and full of noting but praises to her opponents, She is also somewhat insecure and femenine about not having husband. 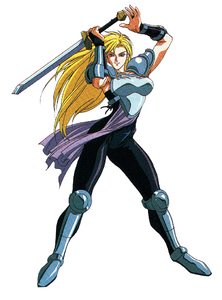 World Heroes artwork.
Add a photo to this gallery

Retrieved from "https://hero.fandom.com/wiki/Jeanne_D%27Arc?oldid=1730135"
Community content is available under CC-BY-SA unless otherwise noted.