Master of the Order

Defeat the Sith and bring peace to the galaxy (succeeded)

The Jedi Order, later known as the Old Jedi Order and referred to as the Holy Order of the Jedi Knights, is the main protagonist faction of the Star Wars franchise. They are an ancient peacekeeping organization united by its belief and understanding of the Force, specifically the light side.

The Jedi were the guardians of peace and justice in the Old Republic, later the Galactic Republic, and became among the most famous of the various groups that relied on the Force for their power. Led by the Jedi Councils, the Order grew over the millennia despite facing many trials.

They were also the constant enemy of the Sith, wielders of the dark side of the Force and the opposite of what the Jedi stood for in regards to philosophy and power. Despite their long-millenia of Servitude, the old Jedi Order and the Galactic Republic became the target of a millenium-spanning plan of vengeance plotted by the Sith to which Palpatine, both the Supreme Chancellor and secret Sith Lord, Darth Sidious succeeded in destroying the ancient order and tearing down the Old Republic in order to transform it into a Sith-ruled Empire.

As a result of Emperor Palpatine's rise to power and the end of the Galactic Republic that the Sith Empire was restored which it transformed into the First Galactic Empire, the Jedi Order was hunted down to extermination by the Emperor's new apprentice, Darth Vader (formerly Anakin Skywalker) and disgraced in the eyes of the Republic and the galaxy. Later, after the Empire's fall and the rise of the New Republic, Luke Skywalker started to train a group of Force-users to form a New Jedi Order.

However, Luke's apprentices were killed during a lightning storm that destroyed his Jedi Temple. To make matters worse, his nephew, Ben Solo, fell to the dark side after Luke was tempted to kill him in his sleep. Ben would later join a group of dark side warriors called the Knights of Ren, serve the First Order under the Supreme Leader Snoke, and become the dark side warrior known as "Kylo Ren".

Even though Luke Skywalker survived the destruction of his Temple, he went to self exile after failing to stop Ben Solo from becoming Kylo Ren. During six years, the Resistance and the First Order went on very competitive race to find the last Jedi until a scavenger named Rey found the map to the first Jedi Temple. She then successfully got Luke to teach her about her Force powers. After Luke Skywalker sacrificed his life to allow the rest of the Resistance and Rey to escape during the Battle of Crait, Rey took on the Jedi legacy and went to help the rebuilding of the Resistance.

A year later the galaxy heard a broadcast of the revived Emperor Palpatine speech of revenants. After the Resistance learned about Sidious' return, Rey and her friends went on a quest to find a Sith wayfinder to Exegol. After finding the wayfinder, Rey fought Kylo Ren on the remains of the second Death Star. Rey ended up saving Kylo's life by healing him from a mortal wound herself inflicted on him before admitting that she wanted to join him as Ben Solo. Incited by his feelings of remorse and the love of his parents and Rey, Ben is brought back to the light.

During the Battle of Exegol, the Resistance took out the Sith Eternal forces with help of the citizens' fleet while Rey and Ben fought Palpatine. After Rey was killed defeating Sidious and his Sith loyalists, Ben Solo revives Rey by pouring all his own life energy into her, vanishing in the Force as a consequence. Sometime after celebrating the victory against Palpatine and the Sith Eternal, Rey and BB-8 went to the Skywalker homestead in Tatooine to bury the two Skywalker lightsabers, before she activated her own yellow-bladed lightsaber. She then proclaimed herself as Rey Skywalker as she introduced herself to an elderly woman while Leia and Luke's Force spirits watched her from afar. Thus, Rey will continue the Skywalker and Jedi legacy.

Sometime later Rey has earned the title Jedi Master while helped by the galaxy restore its long awaited peace. 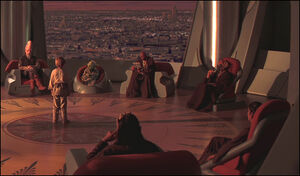 The Jedi Council before the Great Jedi Purge 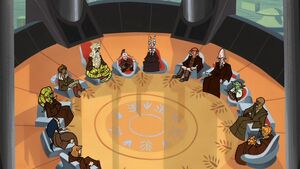 The Jedi Council at the beginning of the Clone Wars

The Jedi Council briefs with Shaak Ti on clone matters

The Jedi Council at the end of the Clone Wars 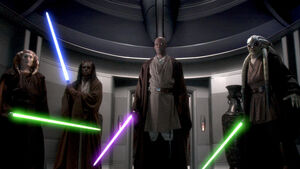 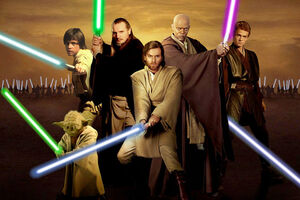