One of the Chosen Four

Save Ness and Paula in Threed.

Defeat Giygas and save the world. (both succeeded)

Chosen Genius
Jeff Andonuts is a major character in the video game EarthBound. He is one of the chosen four, and the third character to join Ness' team. He is also the only party member not to possess any PSI.

Jeff has blonde hair, freckled cheeks, and wears a pair of black rectangular glasses. His attire consists of an open green jacket worn over a white buttoned up shirt, green trousers that match the color of his jacket, a black bow tie and a pair of brown shoes.

While asleep in his dormitory at Snow Wood Boarding School, Jeff is contacted by Paula via telepathy to inform him that she and Ness are trapped in Threed and need his help to escape. He decides to seek them out but is stopped by his friend Tony who advises him to take some items from the downstairs lockers in preparation for his journey. Jeff and Tony go to see the science teacher Maxwell Labs for the key to the lockers and are given a "Bad Key Machine" as the locker key does not fit the locks. After collecting some equipment, Jeff is assisted over the school gate by Tony who wishes him farewell.

He travels to a nearby store and buys a pack of bubble gum for a bubble blowing monkey, which convinces it to join him on his adventure. They make their way south where they find a campsite full of people hoping to catch a glimpse of a creature called Tessie that can be seen during windy days. Jeff takes a rest inside one of the tents until the conditions are right for Tessie to appear and the Bubble Monkey convinces it to emerge from beneath the water to give them a ride down the river.

Jeff and the Bubble Monkey disembark next to a man-made dungeon maze which they are forced to navigate through to proceed further south. The duo eventually arrive at Stonehenge where Jeff enters a nearby laboratory while the Bubble Monkey leaves to pursue a female primate. Inside the lab, Jeff has a brief reunion with his father, Dr. Andonuts, before asking him if he has a way to get to Threed. Dr. Andonuts allows his son to use a vehicle called the Sky Runner, which flys Jeff to his destination and crash-lands beneath Threed cemetery where Ness and Paula are trapped underground. He opens the door to their prison using the Bad Key Machine and joins them on their quest to defeat Giygas.

Jeff makes a cameo in the congraturations scene of Ness. 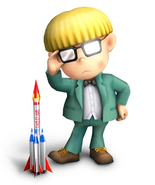 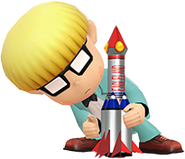