Roll his way into the semis

Jeffrey Lebowski (better known as The Dude) is the main protagonist in the film The Big Lebowski.

He is portrayed by Jeff Bridges.

Little is known about Lebowski's life until adulthood. It has, however, been revealed that he didn't like his name very much, so he started calling himself The Dude. He did go to college, but he has little memory of it.

One day, during January 1991, two thugs break into his house, believing he is the millionaire of the same name, whose wife owes their boss Jackie Treehorn money, and urinate on his rug. The Dude then tries to track down the millionaire Lebowski (played by David Huddleston) for compensation. Lebowski has a distaste for people like The Dude (whom he calls bums), but agrees to let The Dude take one of his rugs. However, Lebowski calls The Dude back to his mansion, and makes him an offer to deliver ransom money of one million dollars to a group of people who have kidnapped his wife, Bunny. In return, Lebowski would pay him $20,000.

The next day, however, a mysterious woman breaks into the Dude's house and steals his rug.

Later that evening, The Dude goes to the kidnappers to deliver the ransom money, along with his friend Walter Sobchak (played by John Goodman), who brings a suitcase full of his dirty underwear, with the intention of dropping it off instead of the money. Walter makes a plan to drop it off in place of the money, while he and The Dude attack the kidnappers and demand that they tell them where Bunny is, so that they'd return to Lebowski with Bunny and keep the entire million dollars. The Dude is not happy with this, but agrees to go with it until the kidnappers call and tell The Dude there will be no handing off of the money, and instead they'd throw it out their car window. Despite this, Walter throws the underwear out, and attempts to jump out of the car wwith a gun, but the gun blows out a tire on the car, causing The Dude to crash. The kidnappers ride away on their motorcycles, leaving the entire mission botched. But Walter just says, "Ah, fuck it, Dude. Let's go bowling."

Lebowski and his assistant, Brandt (played by Phillip Seymour Hoffman), try calling the Dude on the portable phone theey gave him, but the Dude refuses to respond, fearing the reaction he'd get from them. After leaving the bowling alley, the Dude noticed that his car was stolen, along with the briefcase of money. Frustrated, The Dude walks home and reports the theft to the police. While being interrogated, the woman who stole his rug earlier calls him and reveals herself to be Lebowski's daughter, Maude Lebowski (played by Julianne Moore). She asks The Dude to come to her studio as soon as possible.

Maude reveals herself as a feminist and an artist and that she stole the rug because it was left to her by her deceased mother (Lebowski's first wife), meaning it was not Lebowski's to give. She also claims to have always sniffed at her father's withdrawl of one million dollars from his foundation for sending less fortunate children to college, and believed the kidnapping was fake. She asks The Dude to get the money back from the kidnappers (whom he never delievered it to), and that she's give him $100,000 in return, and he could use it to buy any number of rugs.

While being brought home by one of Maude's drivers, another driver grabs The Dude and stuffs him in Lebowski's limo. He is very angry with The Dude, as the money was never given to the kidnappers. The Dude then says the kidnapping was fake, and that she knew the kidnappers, and that she needed the million dollars to pay off a huge debt she owed to pronographer Jackie Treehorn. Lebowski then gives The Dude an envelope containing what appears to be Bunny's toe, saying that he told the kidnappers to get their money from The Dude at any cost, believing he still has it. Walter, however, doubts that was Bunny's actual toe.

While relaxing in his bathtub, he hears on his answering machine from the police that his car was found, and that he can pick it up from them. At that time, though, the kidnappers break in and reveal themselves to be German nihilists. They then throw a marmot in the tube in an attempt to get the money back from him, but without success. They then threaten to come back later to cut his penis off.

The Dude then recovers his car, but finds out that the briefcase was gone, to his dismay.

By now, The Dude felt very frustrated and anxious over everything ("I could be sitting here with just pee stains on my rug"), almost regretting everything. While at the bar, he meets The Stranger (played by Sam Elliot), who tells him that life is full of ups and downs ("Sometimes you eat the bear, and sometimes the bear, well, he eats you"). After he leaves, The Dude gets a call from Maude, who says The Dude needs to see a doctor to help heal his jaw, which was cracked by one of Maude's men on the night she stole his rug.

He goes back to her studio and meets a friend of Maude's, named Knox Harrington, whom he gets really annoyed with due to his constant giggling. The Dude claims the Bunny really was kidnapped, but Maude claims that this is false, claiming one wouldn't kidnap someone they know, as the kidnapper would always need to be kept anonymous. The Dude then goes to the doctor, but it is revealed that he was there to help with The Dude's jaw, but rather to get him circumsized.

Feeling much better, the Dude drives home, but crashes after dropping an ash from his cigarette on his la. As he gets out of the car, he notices a slip of paper that turns out to be a social studies report from a high schooler named Larry Sellers. The Dude then comes to the conclusion that he stole his car and still has the briefcase. Walter tracks him down, finds his address and makes a plan to go there with The Dude to get the money back from him.

They go to his house, and find a Corvette parked outside, coming to he conclusion that Larry had spent some money already, and could have possibly spent more. They go inside the house and try to talk to Larry calmly and peacefully, but Larry refuses to talk. Walter then gets angry, storms outside, pulls a crowbar out from The Dude's car and uses it to smash the Corvette. However, another man runs out, revealing himself to be the owner, takes the crowbar from Walter and uses it to smash The Dude's car (believing it's Walter's). The Dude and Walter leave without any money and a smashed car.

The Dude then borders up his door to prevent the nihilists from coming in, but before he finishes, Jackie Treehorn's thugs come back, this time knowing which Lebowski he is, and tells him Treehorn wants to see him at his mansion.

Treehorn, dismayed over the fallen standards in adult entertainment, tells The Dude he wants to help him, mostly to get his money from Bunny, promising a large sum of money in return. The Dude tells Treehorn that Larry Sellers has his money, but Treehorn thinks The Dude is lying to him, so he drugs his White Russian, causing him to go unconscious and later drunk. The Dude is arrested and is taken to the police station, where he is verbally and physically assulted by the chief of police. With him out of the way, Treehorn goes to The Dude's house and ransacks it, believing he still has the money.

The Dude returns to his house exhausted and hung over, and finds Maude there, who asks The Dude to have sex with her. She reveals that she wants a child and that The Dude was circumsized to increase her chances of percetion, and also that she wants to be a single parent and she doesn't want anything more to do with him. She then says that her father has no money of his own. It was all her mother's.

The Dude then comes to the conclusion that he took the million dollars out for himself and was glad that Bunny kidnapped so that it would seem reasonable for him to take the money. As he kept it for himself, the briefcase he gave The Dude had telephone books in it so it would feel heavy, and he could use The Dude to pin the theft on. The Dude then calls Walter to go to Lebowski's mansion to confront him, who is reluctant to go because he is Jewish and it's the night of the Sabbath.

Upon arrival, Bunny had returned home, and Walter, extremely angry over Lebowski's antics, particularly taking money from kids who need it, picks thee handicapped Lebowski up from his wheelchair and throws him down on the ground.

The Dude is confronted at the bowling alley by thee nihilists again, who have set his car on fire and emands the money back again. But Walter reveals that they don't have the hostage and that the toe came from one of their girlfriends. The nihilists then agree to leave them alone forever if they give them all the money they have on them, but Walter refuses. They nihilists then try to attack, but Walter fights back. First, he throws a bowling ball into one's chest. Then, he bites the another's ear off. Finally, he swings a toolbox into the last one's face. After that, their friend Donny (played by Steve Buscemi) suffers from a heart attack and eventually dies.

After all urns to transport Donny's ashes are too expensive, the two then dump his ashes in the sea in a Folger's coffee can. Walter sets it up as a memorial to Donny, but turns it into a eulogy for deceased Vietnam War veterans (which he saw die), making the Dude angry, although he is too sad by Donny's death to remain angry for long.

The movie ends with The Dude in the bowling talking to The Stranger again and getting ready for the semi-finals. He then walks away saying, "The Dude Abides."

The Dude was still alive in 2019 and was still fond of White Russians. One night he walked in to an upscale restaurant after Carrie Bradshaw had caused a stir by ordering a Stella Artois instead of a cosmopolitanism. Seeing the broken dishes he remarked it must've been a wild night. He then caused a further stir by telling Gary that instead of his usual White Russian, he also wanted a Stella.

Sitting down next to Carrie, Lebowski told her that from time to time that change was good, and that he still abides. 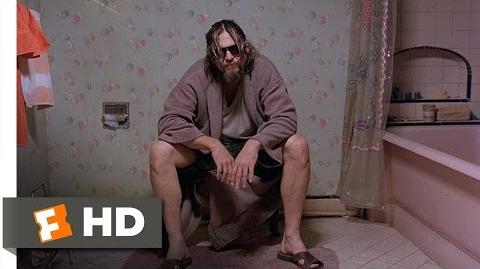 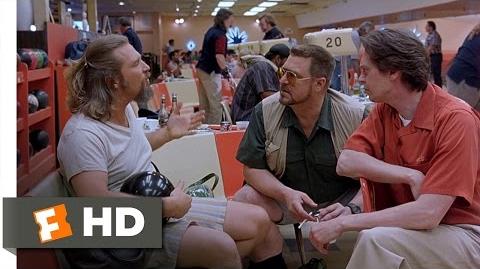 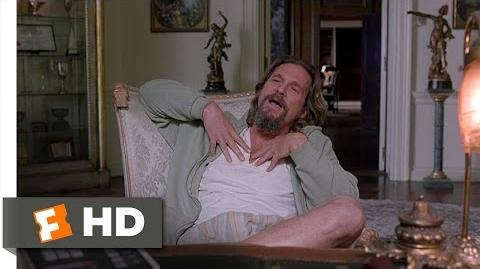 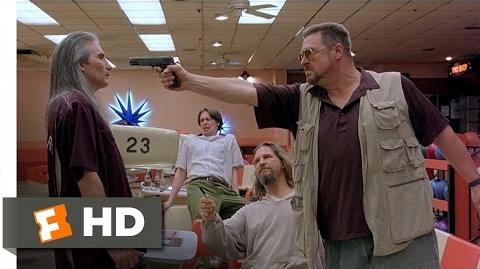 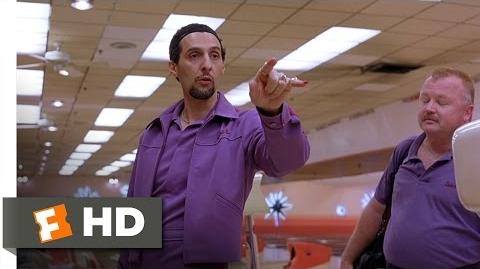 The Big Lebowski - Nobody F's With Jesus Scene (5 12) Movieclips 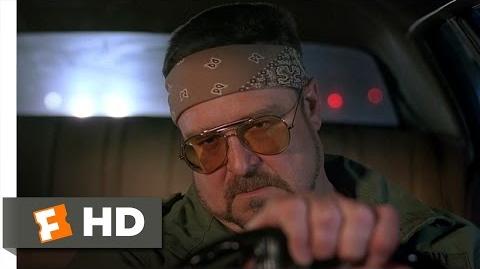 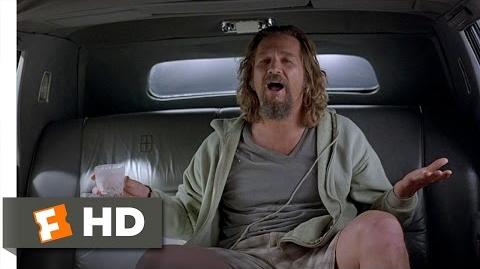 The Big Lebowski - She Kidnapped Herself Scene (7 12) Movieclips 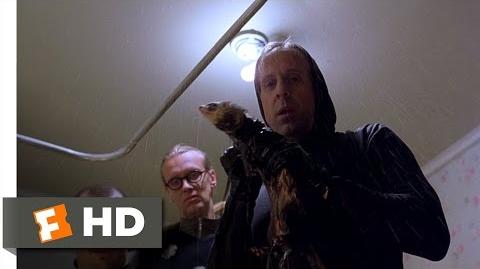 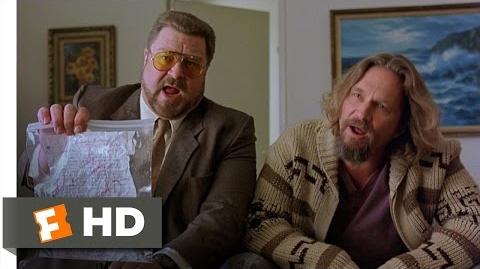 The Big Lebowski - Is This Your Homework Larry? Scene (9 12) Movieclips 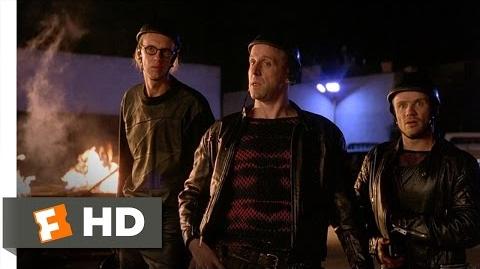 The Big Lebowski - These Men Are Cowards Scene (10 12) Movieclips 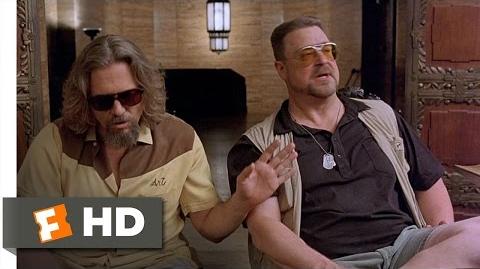 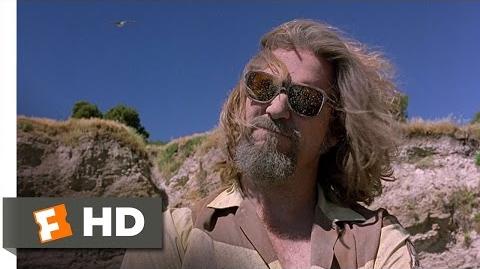 Retrieved from "https://hero.fandom.com/wiki/Jeffrey_Lebowski?oldid=2256207"
Community content is available under CC-BY-SA unless otherwise noted.