Heroes Wiki
Register
Don't have an account?
Sign In
Advertisement
in: In Love, Animals, Movie Heroes,
and 16 more

Jenna is a character in the Balto movie trilogy, the love interest and later mate of Balto and the mother of Aleu, Kodi, Dingo, and Saba.

She was voiced by Bridget Fonda in the first film while Jodi Benson plays her in the sequels. In the Japanese dub from the movie, she was voiced by the late Toshiko Fujita and currently by Keiko Toda.

Jenna was first seen with her owner, Rosy when Rosy got her first sled and the girls include Jenna's friends Dixie and Sylvie went to the sled-dog race until Rosy's hat was blow and was in the middle of the race.

Then, Balto came along and racing to get Rosy's hat before the sled-dog team was heading toward the hat.

After the race was over, Balto give the hat to Rosy which Rosy replies "Balto, what a crazy thing to do. Just to show off with a pretty girl."

Steele, the primary antagonist of the first film, is in love with Jenna, but she doesn't like him and even lured his butt to a hot furnace.

When Rosy falls sick with Diphtheria, Balto goes off to help the sled team, Jenna follows along and saves Balto from a grizzly bear.

The bear eventually falls into a frozen lake and drowns. Jenna gives Balto her bandana to keep him warm and heads back to town when her paw was hurt during the bear attack.

After Steele sabotages Balto and the sled team, he heads to Nome and lies how Balto ruins everything.

To try and convince her, he hands Jenna her bandana which he got in a fight with Balto, though he claimed Balto gave it to him and made Steele promise to take care of her.

While the other dogs cheer him as a hero, Jenna, knowing that Balto would never say such a thing, saw through his lies and uses broken bottles and a lantern to create fake Northern Lights.

Balto sees them as he embraces his wolf heritage and makes it to Nome. Steele's lies are exposed causing the other dogs to realize they're been lied and betrayed and Dixie angrily calls him a disposable, leaving him an outcast, all the children including Rosy, who are saved and Balto gains the respect of the whole village.

In this film, Jenna and Balto become parents when they have a litter of puppies together. Most of the pups take after Jenna, except Aleu, who takes after Balto. Because of this, no one will adopt her and instead adopt her siblings. As a result, Aleu remains with her parents.

A year later, Aleu runs away from home after learning that she is part wolf. Jenna wishes to help Balto in finding their daughter, but he insists that she stays behind as this is something he must do, but promises he will find her.

However at the end of the film, Aleu wishes to remain with a wolf pack and tells Balto that he should be with Jenna.

This film focuses on Jenna and Balto's son Kodi who works on the sleigh team that deliver mail for Nome.

When Balto was chosen to help Kodi save his job, Jenna encouraged him to help their son.

Balto was worried that he would let the team down and that he wasn't a hero, Jenna reassured him that if he could save a whole town, then he could help save Kodi's job.

After Balto left to save Duke by himself, Jenna scolded Kodi for letting Balto go alone and convinced Kodi to follow his father. She awaited anxiously for his return, howling a cheer when the team came to town. 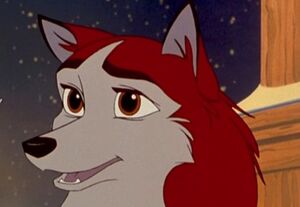 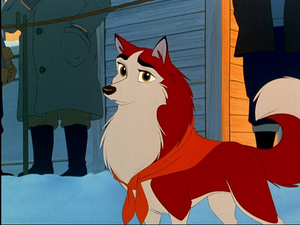 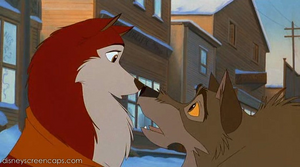 Balto nose to nose with Jenna 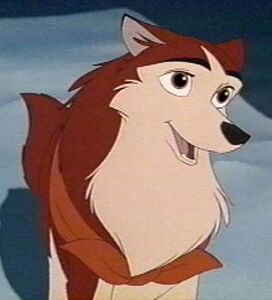 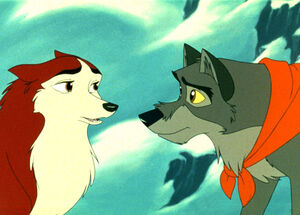 Injured Jenna gives Balto her bandana for him to continue the journey to save children. 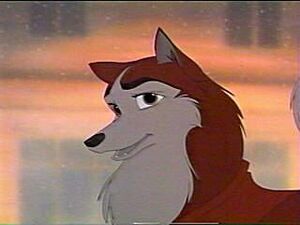 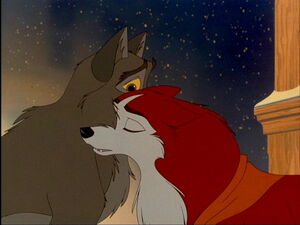 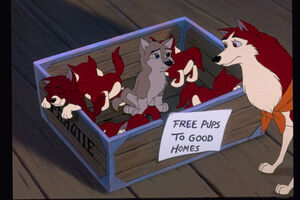 Jenna with her daughter Aleu and her siblings 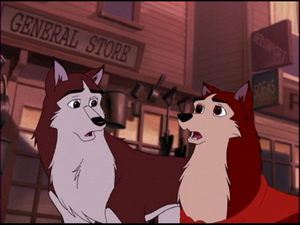 Jenna and her son Kodi 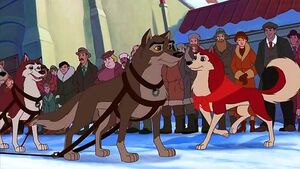 Jenna after Balto and Kodi return with the team