Jenna is the deuteragonist of the 2009 remake of Friday the 13th and Clay Miller's love interest.

The girlfriend of Trent Sutton, a rich brat, Jenna and several of her friends accompany him to his summer home in Crystal Lake in 2009 to party through the weekend.

Stopping at the Outpost gas station, Jenna goes inside with Trent and Chewie to pay for gas and snacks and winds up breaking up a fight between Trent and Clay Miller, a young man looking for his missing sister, Whitney.

When Clay goes to leave, Jenna apologizes to him for Trent's behavior. Reaching the summer house after the stop at the gas station, Jenna leaves the others to their fun and hangs out on the porch.

When Trent comes to see her, Jenna asks if he wants to go hiking which Trent declines, obviously intent on only having sex.

Brushing off Trent's advances, Jenna, after seeing Nolan and Chelsea off to the lake with Trent, meets Clay again when he stops by.

Apologizing once again for her boyfriend, Jenna escorts Clay to his motorcycle and told by Clay that he plans to look around the lake for any hints of what happened to his sister, decides to go with him.

Looking through the woods, Jenna and Clay find a broken GPS and the rundown remains of Camp Crystal Lake.

As night begins to fall, Jenna and Clay decide to check one more before calling it quits.

Before they head into the final cabin, the duo spot Jason Voorhees carrying a dead body.

Hiding under a stacked canoe, Jenna and Clay when Jason spots Clay's dropped bag and begins frantically looking around for intruders, run from the canoe to the woods unnoticed by the hulking killer.

Needing to warn the others about Jason, Jenna and Clay run back to Trent's house, accidentally triggering one of Jason's crude alarms in the forest on the way.

Getting to Trent's place, Jenna tells Lawrence about Jason while Clay calls the police N.C. Jenna asks where her boyfriend and best friend are and Lawrence tells her that they went upstairs together.

As she goes up and tries to tell Trent and Bree about the situation, she finds the two too engrossed in having sex to hear her through the door.

When Jason cuts the power and Trent and Bree finally come out of the bedroom, Jenna breaks up a fight between Trent and Clay and tells her boyfriend what is going on.

After Lawrence, Bree and the recently arrived Officer Bracke are all killed, Jenna, Clay and Trent flee the house.

Jenna runs into the woods with Clay while Trent goes off on his own. After stumbling across the dead bodies of Lawrence and Chelsea, they find the old Voorhees house.

Hearing the screams of the captive Whitney emanating from under the house, Jenna and Clay uncover and enter the tunnels below the house.

While Clay tries to free his sister, Jenna stands lookout in the underground corridor.

After Whitney is freed, Jenna tells them that Jason is approaching. The three of them run deeper into Jason's lair to avoid the pursuing Jason.

Finding a tunnel to the surface, Jenna enters it behind Whitney and Clay. While reaching for Clay's hand, she was impaled by Jason's machete and tossed aside to her death.

Danielle Panabaker, in her breakthrough role that would also lead up to her being typecast as other ill-fated key characters in horror films such as The Crazies, The Ward, and Piranha 3DD (which is so far as of 2012 Panabaker's only horror film where her main character has not died). 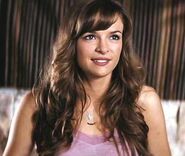 Jenna's Death
Add a photo to this gallery
Retrieved from "https://hero.fandom.com/wiki/Jenna_(Friday_the_13th)?oldid=2320287"
Community content is available under CC-BY-SA unless otherwise noted.