Hanging out with her boyfriend (formerly)

Learn more about her powers (abandoned)

Live a happy life with her boyfriend (failed)

Jenna is a character in the universe of the SCP Foundation only appearing in the tale "Progressive Retrograde". She is one of the main protagonists of the tale alongside her boyfriend in which they spend a happy time together before being detained by the Foundation.

Jenna was born in a harbor town in Iceland where she lived with her family in a little house by the shore. There she discovered her strange power of manipulating the Northern Lights via her mind and mood and so she studied in a university in England where she majored in Aeronomy and began researching on her powers.

One day while traveling to Norway on a train she was approached by a guy who was travelling through Europe and became enamored with her on first sight. The two began to talk and immediately became attracted to each other. They talked until arriving at the station at which point they decided to exchange their numbers and said goodbye before Jenna took a boat to home. After calling Jenna that night, the guy decided to go to Iceland and arrived at the harbor town where Jenna was raised and there she introduced him to her family, but not wanting to intrude he decided to stay in a hostel. Jenna and her boyfriend hanged out together in the ensuing two weeks and near the end of his stay Jenna asked him to go for a walk late at night. While walking they witnessed the beautiful Northern Lights and in that moment he kissed her and promised to her that he would come back.

After he moved to Iceland one year later, Jenna helped her boyfriend by convincing her boss to hire him for some low job which allowed him to earn enough money to live. However, he was able to figure out that Jenna had some sort of secret regarding her obsession with the Northern Lights and every time he asked about this or offer his assistance in her research she would refuse to elaborate and turn his offer down. Eventually when her boyfriend summed up the courage to propose to her for marriage she decided to reveal her secret to him and told him how she was able to manipulate the lights and how she felt connected to them. When he refused to believe this Jenna was saddened by his response, fearing that he would leave her because of this and inadvertently manifested the lights in a faint blue color. This made the boyfriend realize that she was telling the truth, but despite not understanding her ability he embraced and kissed her before asking her again to marry him to which she responded with yes and causing to change the lights to change into pink and red in coloration.

Her boyfriend then began helping Jenna with her busy research to explain her ability, but as time went she became more and more focused on her research and somewhat neglecting anything else. One day she build a machine that would help her measure something regarding her powers and with the help of her boyfriend set it up on the shore the same night, but when they tried to activate it the machine didn't work which caused Jenna to fall into despair. She became more depressed in the ensuing days and nothing her boyfriend said to her could cheer her up which eventually caused a rift in their relationship to form. After a week passed her boyfriend opened up to her and confessed that he was feeling like he was drifting away from her because of her obsession and feared that he would lose her, and after crying together she apologized and told him she loved him and that she was done with her attempts at understanding her powers. After sleeping together that night, Jenna woke up early in the morning and decided to let her boyfriend sleep and went to her work where she convinced her boss to take two months leave and after that she planned to resume her boyfriend's trip throughout Europe. After returning home she found her boyfriend having panicked after he was unable to find her and she explained to him that she planned to go finish his trip together, much to his excitement.

After preparing themselves they went through different places in Europe, before going to their last stop in Athens which coincided with their anniversary at the time. After a week passed, on the last night unbeknownst to her she manifested bright lights over the city after her boyfriend told her something. However, the next day after they packed their things and left the house, some SCP Foundation personnel who became aware of Jenna's power came to them and pulled the couple into their van. Jenna and her boyfriend tried to fight back, but were eventually taken to a Foundation facility where Jenna fell under the custody of the Foundation, while her boyfriend was administered amnestics which caused him to forget everything related to her.

The true appearance of Jenna is never revealed and there are no details about it.

Jenna had the power to manipulate the Northern Lights. Sometimes she was able to completely stop it from manifesting naturally, but when she became too emotional she would unwillingly manifest the lights which would take the color based on her current mood. She described this power as she was one with the lights or connected in some form to them.

Jenna was shown to be a kind and understanding girl. Shortly after meeting with her boyfriend she fell almost immediately in love with him, and would always hang out and spend great time together. However, she at first feared that her ability might cause him to see her as a freak and leave her, so she kept it to herself, but when he proposed to her she decided to be honest told him the truth, before crying when he at first didn't believe her. After he assured her that they would be together she became happy and accepted his proposal and together began researching on her power. As she kept focusing on her research she began neglecting anything else including her lover, and after falling in deep despair over the failure of her machine her neglect worsened as not even he was able to cheer her up. This eventually led to him telling her his concern about their relationship falling apart due to her obsession which made her realize her mistake and apologized to him. To make up for this she abandoned her research and decided to resume her lover’s dream of travelling through Europe which strengthened their bond, until she was taken by the Foundation. 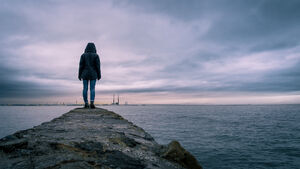 Jenna on the shore. 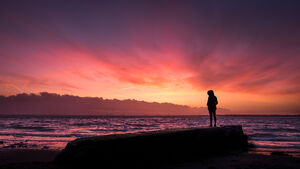 Jenna manifesting the Northern Lights in a red color. 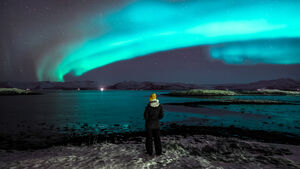 Jenna manifesting the Northern Lights in a blue color.