Jenna Morgan is a character from the Arthur picture books and TV series. She is one of Arthur Read and his friends' classmates.

In the TV series, she is voiced by Brigid Tierney who also voiced Rosie and Clementine from Caillou.

Jenna is a gray (pink later in the show) anthropomorphic cat with black hair and freckles. She wears a pink and yellow collar dress with buttons, long white socks and brown Mary Jane shoes.

Not much is known about Jenna's personality, but she is shown to be a nice and athletic girl.

Not a lot is known about Jenna, but it is known that she is very athletic and has even won the athlete of the year award in the past. She is also a badminton champion, is midfielder for the Lakewood Elementary Soccer Team, and has helped coach pee-wee soccer. However, one sport she doesn't like is hockey, as she considers it dumb. In the episode "Jenna's Bedtime Blues", it is revealed that she suffers from nocturnal enuresis. She is also lactose-intolerant. 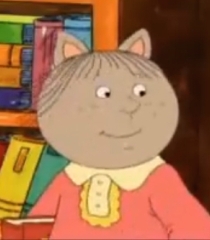 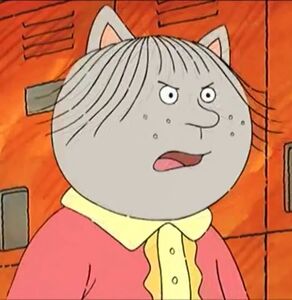 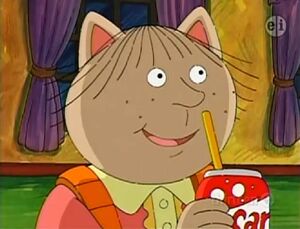 Retrieved from "https://hero.fandom.com/wiki/Jenna_Morgan?oldid=1686577"
Community content is available under CC-BY-SA unless otherwise noted.