Jen (by her freinds)

Jennifer Mui was a member of Executive Operations (ExOps) and was their most experienced agent. She is also a former member of the Secret Intelligence Service, also known as MI6, Britain's international intelligence agency. She is currently part of the Private Military Company. Mui is featured in both Mercenaries: Playground of Destruction and Mercenaries 2: World in Flames as a playable character.

She was voiced by Jennifer Hale, who also voiced Female Shepard and Ophelia.

Mui was born in Hong Kong, China to a British cultural attaché and a Chinese diplomat. Her parents divorced when she was twelve years old. Mui moved to Britain with her mother and her father remained in Hong Kong. Being the daughter of a single parent who was often busy at work made Jen extremely self-reliant. She was an exceptional student and athlete and after graduating, she joined her Majesty's Armed Forces, more specifically, she was a part of the Paratroopers. Then she moved on to the Special Air Service. It was during this time that an MI6 recruiter took an interest in her. Although Jennifer enjoyed her work and was supremely qualified for it, she was dissatisfied with the income she earned. She left MI6 and became a mercenary, where her espionage experience put her in high demand. She joined Executive Operations, serving them for seven years and participating in the "Song Initiative".

Jen has learned to be self-reliant and fiercely independent, perceiving reliance on others to be a weakness and trusting only a select few mercenary comrades. This is a product of a lack of strong parental influence in her life. Her parents separated and her mother frequently away on business-related matters leaving her to rely on herself.

She is also what some may call "greedy", with an obsession for material wealth, stemming from a desire to lead a life better than that of her mother after her parent's divorce. She never questions the morality of her work, only the income, believing that everyone is dirty but their money is clean. She enjoys her work as a mercenary, finding it allows her to remain independent of others and provides the income to support the lifestyle she desires. She is also a shrewd negotiator, frequently manipulating new clients who underestimate her beauty and womanly charms.

Jennifer's years of service under MI6 and the training required have made her supremely skilled in stealthy operations. While Christopher Jacobs approaches missions with conventional military tactics and Mattias Nilsson destroys everything in his wake with massive firepower, Jennifer prefers to remain as quiet and covert as possible, while also possessing superior speed to her fellow ExOps colleagues.

She is an expert marksman, skilled with a sniper rifle as well as other covert weapons. She is also skilled at throwing grenades, capable of throwing them further than her comrades. However, she often wears less body armor or protective clothing than Mattias or Chris, and so she is less durable in combat than either. Because of her slimmer frame and less muscle mass, she carries less ammunition than the other mercenaries, but is able to sprint faster and for longer distances. Due to her years in Hong Kong, Jennifer is a fluent speaker of the Chinese language. 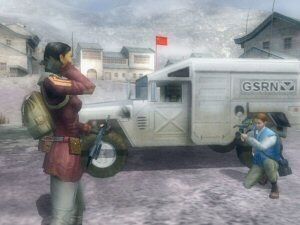 Posing for a cameraman. 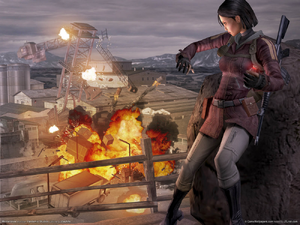 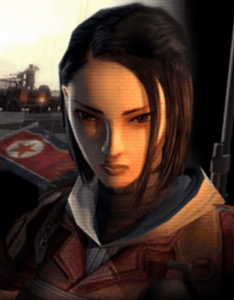 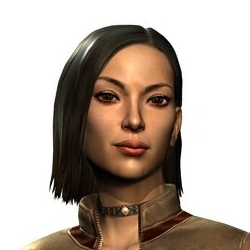 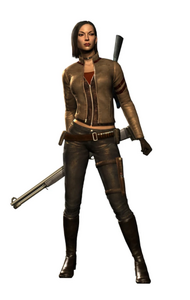 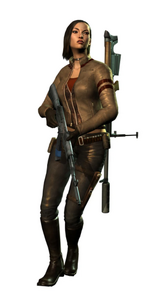 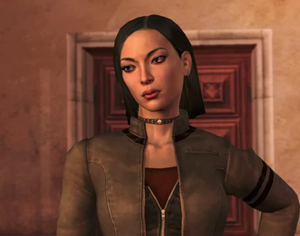 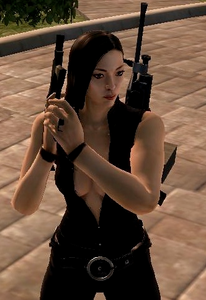 Cat suit with no sleeves. 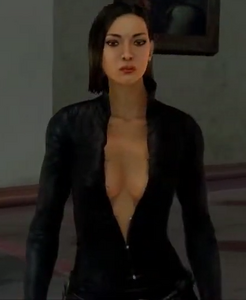