Having fun with Oliver; later, Fagin and his dog pals.

To take care of Oliver; later, to rescue Oliver from being catnapped (succeeded).

Kid Heroine
Jennifer "Jenny" Foxworth is the tritagonist from Oliver & Company. She is the pet owner of Oliver.

Jenny is a cute and beautiful 7-turned-8-year-old girl with red hair and blue eyes that she mostly wears in a half updo. She appears in four different outfits throughout the film.

She is first seen wearing a tartan blue and white school uniform. Then, she wears her casual outfit consisting of a sleeved sky-blue turtleneck. She also wears a skirt, periwinkle tights and sneakers.

At first, Jenny appears lonely because of her parents being away, but gains happiness as she spends time with Oliver after adopting him. After learning that Oliver had been "catnapped," she is visibly worried and upset.

She is even willing to do whatever it takes to get him back. She is cute, beautiful, caring, helpful, kind, and friendly.

Jenny first appears a quarter of the way in the movie with her family's butler, Winston, after her parents have left for business. In a limousine, she reads a letter written by her mother, saying that she and her father left Paris for a conference in Rome.

After reading the letter, she becomes disappointed when she learns that her parents won't make it home in time for her birthday; despite Winston's efforts to comfort and make her feel better.

Then, in one of the mishaps performed by the kitten, Oliver, he ends up in her mansion, preferring it to his former life on the streets.

Winston is against the idea of Jenny adopting Oliver for the reason that they have a dog; a poodle named Georgette.

Winston was left responsible for Jenny by her parents, and they have to wait for her parents' approval. In the kitchen, Oliver has a special meal prepared by Jenny, who made a mess while preparing it, which annoys Winston a bit.

Then, she talks to her parents on the phone, after Winston answered first; assuring everything is fine, about their decision about whether to keep Oliver or not.

She comes in after having had a talk with her parents on the phone and tells Georgette, who unfortunately met Oliver, that they have approved about her decision of keeping Oliver and that they're going to be "the best of friends."

Over time, Jenny bonds with Oliver while practicing piano. As Jenny begins to do so, after being reminded by Winston, Oliver somewhat helps her by playing a discordant note. Then, she sings "Good Company" while playing the piano with Oliver.

Later, they spend the rest of most of their fun of the day at Central Park: riding in a small boat in the lake, playing with fences, greeting people they pass by (with a curtsy from Jenny and a bow from Oliver, respectively), eating strawberry ice cream, riding in a carriage and finally buying Oliver things with his name on them in a shop, including his bowl and finally of course, his new golden blue collar name tag with his name and the address on it.

Oliver is so happy and excited that he jumps on Jenny and licks her as his way of showing his gratitude and that he loves her very much.

At night, as Jenny is getting ready for bed while singing a few words from "Good Company," Oliver jumps in as well to sleep with her, snuzzles his nose with hers as he is picked up by, is tucked in and told "Good night, Oliver".

The next day, while Jenny is at school, Oliver is "rescued" by his dog friends who take him back to Fagin's barge. Fagin, seeing his gold collar, notices that the address is 5th Avenue.

He plots to ransom him to get the money he needs to pay back his evil boss, Sykes, unaware that Jenny herself is the "wealthy cat owner".

When Jenny returns home from school and calls for Oliver, she can't find him anywhere, even with Georgette's "help." She finds Fagin's (unknown to her) ransom note along with his drawn map for their rendez-vous in the mail slot. Jenny gets worried about Oliver and resolves to get him back, much to Georgette's dismay.

At night, with Georgette, Jenny follows the confusing directions on Fagin's map and believes that they are lost, when in reality, they have reached their destination.

After meeting Fagin, she tells him about how Oliver was ransomed, not knowing that Fagin himself is the kidnapper, and shows him the piggy bank she brought in order to get him back.

After their small conversation, and feeling guilty and seeing Jenny and Oliver crying and sad, Fagin follows his good heart, gives up the ransom and returns Oliver, whom he pretended to find in a box to Jenny.

However, Sykes, along with his two Dobermans, Roscoe and DeSoto, had been watching the whole thing in his car.

Sykes then shows up, tosses Oliver out of the window, kidnaps Jenny in order to ransom her to her wealthy parents and tells a shocked Fagin to keep his mouth shut and consider their account closed.

With the help of Oliver and his friends, at Sykes' warehouse, Jenny is rescued, while their enemies are distracted, along with the help of a crane operated by one of Tito's electric specialities.

When their enemies return and Sykes destroys the crane's controls, Jenny and her friends are seen falling and landing on a long slide.

At the end of the slide, their enemies have them cornered but before Sykes can snap his fingers to order his dogs to attack, they hear a honking noise and bursting in through the windows, it is revealed to be Fagin, coming to the rescue. Jenny and the gang hop in and flee.

They're able to outrun the Dobermans until Sykes catches up with them in his car. Fagin, having no choice, drives his friends in a substation but Sykes, driving like a madman, is still able to follow them.

JIn a tunnel, with Sykes still pursuit, Sykes' car collides with Fagin's scooter, causing Jenny to fall and end up on Sykes' hood. When Sykes tries to grab her, Oliver saves her by biting Sykes' hand but then, is tossed at the back seat where his two evil dogs are.

Then, Dodger saves Oliver by fighting off Roscoe and Oliver saves Dodger by fighting off DeSoto; killing them both in the process with the help of an electric railway caused by the friction between Sykes' ruined car tires and the tracks.

On the Brooklyn Bridge, Jenny calls for help from Fagin and he comes to her aid; leaving Tito in charge of his scooter.

Unfortunately, Sykes grabs Jenny by the leg and tries to pull her back in, not before Oliver and Dodger jump on him and fight him off; giving Jenny the chance to jump into Fagin's scooter.

In front of them, a train is coming their way. Tito is capable of saving everyone by jumping on one of the cables of the bridge and driving them to the top but Oliver and Dodger are still in the car; fighting Sykes.

Sykes throws Oliver and Dodger out of his car until he notices the train heading his way and the train kills him, thus sending him and his car into the Hudson River.

When the rest of the company drive back down, Jenny runs to search for Oliver, only to find a sad Dodger approaching and holding a "thought to be dead" Oliver.

At first, everyone thinks that he's dead but when Jenny hears a soft meow from Oliver, she quickly realizes that Oliver is alive and everyone is rejoiced, except Georgette, who is still in great shock from the chase.

Then, Dodger and the rest of the gang are accepted as Jenny's new best friends.

The next day, Oliver and the gang are celebrating Jenny's birthday (eight candles on her cake suggests that she is 7 prior to this scene), giving Jenny birthday gifts; mostly Einstein, while she thanks them for the gifts as reminded by Winston when it's time for her friends to go, and she gets to keep Oliver, as her parents already said that she could.

Jenny is last seen saying good-bye to Fagin and his dogs. As he and the gang are driving back home, Jenny is seen along with Oliver and Winston saying good-bye to them and watching them as they head back to the barge, while singing "Why Should I Worry ?". 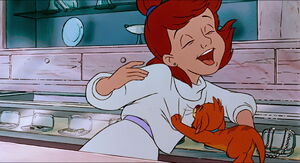 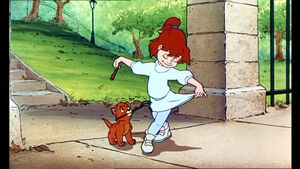 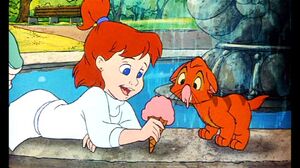 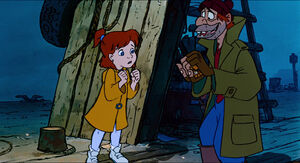 Fagin abandons the ransom and returns Oliver to Jenny 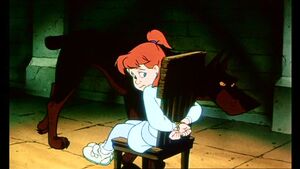 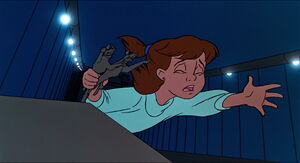 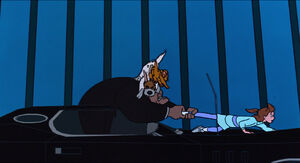 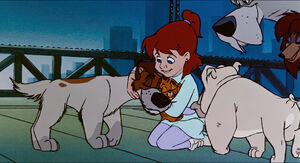 Jenny thanking Oliver, Dodger and the gang for saving her. 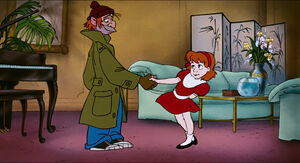 Jenny thanking Fagin
Add a photo to this gallery

Retrieved from "https://hero.fandom.com/wiki/Jenny_Foxworth?oldid=1573085"
Community content is available under CC-BY-SA unless otherwise noted.