No information
Secret Agent Jeopardy Mouse is a tomboyish secret agent mouse and the rival of Danger Mouse of the 2015 reboot series Danger Mouse. She is voiced by Lena Headey.

She wears a pink jump suit an aqua blue belt and dark green boots with blue gloves. She has a no-Nonsense personality and prefers to get missions done in the most quickest and practical way.

The female American equivalent of Danger Mouse. Clad in a slick military jumpsuit and working under orders from General E. Normous Schwartznut, she performs her missions professionally and without fuss-- but has a tendency to be overbearing and take herself too seriously. 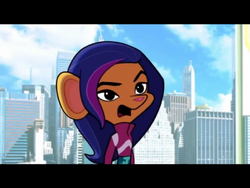 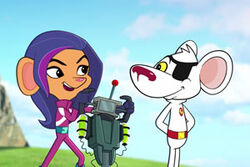 Retrieved from "https://hero.fandom.com/wiki/Jeopardy_Mouse?oldid=1918626"
Community content is available under CC-BY-SA unless otherwise noted.