He was voiced by the late Dom DeLuise, who later reprises his role in the sequel, who also voiced Fagin in Oliver & Company, Tiger in An American Tail, Itchy Itchiford in All Dogs Go to Heaven, Christopher Columbus in The Magic Voyage and Stanley in A Troll in Central Park.

Jeremy is a thin crow with a beak and thin orange legs, his feathers is black and it seems that he can keep things in his feathers, in his eyes he has two dark blue bags, his eyebrows are gray and on his neck he has its characteristic red thread that looks like a red necklace.

In the Book, Jeremy got tangled in the silver ribbon on the fence, just for being "shiny", Mrs. Frisby saw him and asked him not to move or Dragon the Cat would appear, so she helps him untangle himself and asked him to see the Cat nearby, Mrs. Frisby manages to untangle it and just the dragon appears, so Jeremy is carried away with Mrs. Frisby away until he reaches his house, Jeremy thanks Mrs. Frisby for saving his life, Jeremy tells him his name, and he is indebted to Mrs. Frisby and tells her that if she has a problem, she can count on him and Jeremy flies away.

While Mrs. Frisby was trying to figure out how to move her house since Timmy cannot get out of bed due to his Pneumonia disease, she meets Jeremy while he had a piece of aluminum sheet, she decides to ask Jeremy for help, and he shows the aluminum sheet and Mrs. Frisby asks Jeremy why he is so interested in shiny things and he tells her that he has a friend he always takes him to and Mrs. Frisby guesses that Jeremy's friend is a female and Mrs. Frisby tells Jeremy about her problem and he shows compassion for her and he doesn't know what he should do but he tells her that when the birds have a problem, they consult with the great owl and Jeremy suggests that she should talk to him about their problem and Jeremy he tells Mrs. Brisby that in the afternoon take her to meet the great owl.

In the afternoon, Jeremy came to Mrs. Frisby's house to take her and he meets Mrs. Frisby's children, Teresa and Martin, except Cynthia who she is afraid of him, Jeremy carries Mrs. Frisby flying on his back and Mrs. Frisby is surprised by the view from above while she flies with Jeremy, she saw a lake and says that it looks like a snake but he tells her that that is the lake, they arrive at the tree of the great owl, and Jeremy talks to the owl and He tells him that his friend (a mouse) has a problem, the great owl is surprised by the friendship of Jeremy and Mrs. Frisby and he tells her that she saved the life of Dragon the cat and the Great Owl allows Mrs. Frisby to enter her tree to save a crow.

Jeremy waits outside the tree for an hour while Mrs. Frisby talks to The Great Owl, Mrs. Frisby comes out of the tree while Jeremy complains a bit about waiting outside for too long and he takes Mrs. Brisby back home while she tells him that The Great Owl recommended that he seek help from the Rats and Jeremy is surprised because the Rats do not want to know anything about anyone and when Jeremy leaves Mrs. Frisby at his house he gives him thanks for saving his life and Jeremy flies away.

Jeremy does not appear again later in the book but the one mentioned several times by Mrs. Frisby and in the ending, Martin wants to visit Thorn Valley one day and comes up with the idea that Jeremy will take him there one day.

In the Film, Jeremy appears when Mrs. Brisby returns from Mr. Ages through a fallen tree. She encounters him trying to free himself from red string which he says is for a nest; Mrs. Brisby begins to remove the string but Jeremy claims he can see Dragon the cat approaching them but he’s mistaken for a rabbit. Afterwards, the real Dragon approaches from inside the log but he’s given away by Jeremy's cat allergy. Mrs. Brisby rescues Jeremy who, in turn, rescues Mrs. Brisby. He flies her to safety but she’s devastated because she lost the medicine for Timothy (given to her by Mr. Ages). Soon, she’s cheered up when Jeremy gives her back the medicine which he found. Afterwards, Mrs. Brisby continues her journey home with Jeremy in tow. He offers to fly her home but she declines saying she’s acrophobic (afraid of heights). Then he flies away when Mrs. Brisby arrives at her house safe and sound.

In his next appearance, Jeremy flies Mrs. Brisby to see The Great Owl who tells her to go to the rats in the rosebush near the farmhouse who will move her house to the Lee of the Stone.

In his third appearance, Jeremy is apprehended (caught) by Auntie Shrew who ties him up in his own string. Then Auntie Shrew leaves him but Jeremy is found by Mrs. Brisby's children who repeatedly asks where their mother is, (earlier he promised Mrs. Brisby to look after her children while she visits the Rats of NIMH and Nicodemus but she also told him not to tell her children where she is).

Jeremy appears two more times before the movie ends, in his second to last appearance he is seen hiding in the pond while Mrs. Brisby passes through to head home after hearing about the plan to move her house to the Lee of The Stone. He tells her he was captured by Auntie Shrew but he gets distracted by Mrs. Brisby's amulet given to her by Nicodemus. She tells him to get all the string he can to form a lever and pulley system to make the plan work. Although he does not appear in the house moving scene, he does appear afterwards where he arrived at the Brisby home with a bundle of string. There, he notices the house has moved and ponders what he will do with all of his string until a female crow equally clumsy as him flies into him by accident. Jeremy then uses his string to make a love nest with 'Miss Right'. The film ends with Jeremy and Miss Right flying away into the sky together.

He took Timothy to Thorn Valley, then as seen later on posed as the Great Owl, until caught and helped Timothy and Jenny to find NIMH. 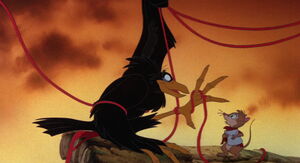 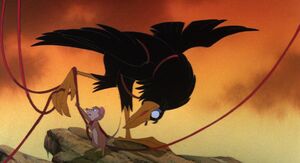 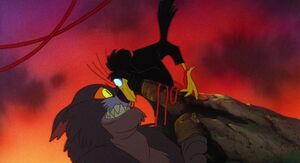 Jeremy sneezes on Dragon and Dragon is not happy at all 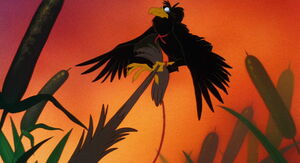 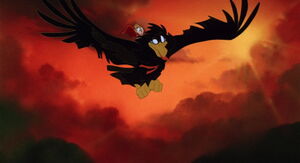 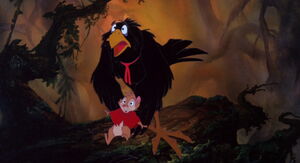 Jeremy and Mrs. Brisby enter the home of The Great Owl 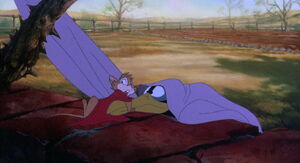 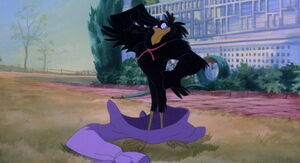 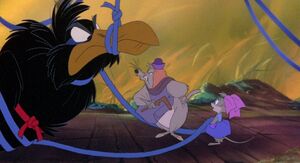 Jeremy is tied up by Aunt Shrew 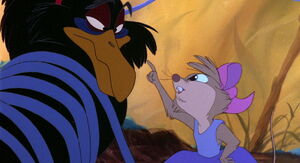 Jeremy is interrogated by Teresa Brisby 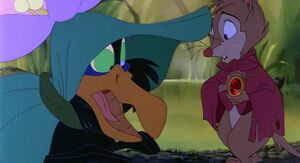 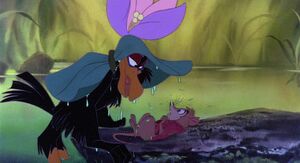 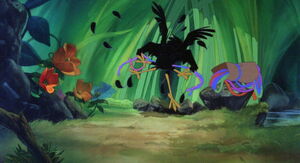 Jeremy is shocked by Miss Right 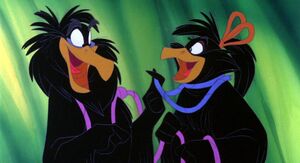 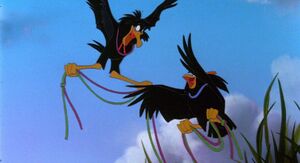 Jeremy and Miss Right flying together with the strings 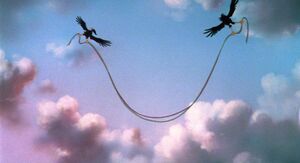 Jeremy and Miss Right flying together as a happy couple