Save the Digital World and the Human World

Pawn of villain and Fight the D-Reaper
Jeri Katou (加藤 樹莉, Katō Juri) is a fictional character from Digimon Tamers. Her Digimon partner was Leomon. and Now Calumon. It is made clear that Takato Matsuki has a crush on her, and by the end, it seems that the feeling is mutual.

In the English version, she is voiced by Bridget Hoffman in the TV Series and late Philece Sampler in the movie.

In the Japanese version, she is voiced by Yoko Asada.

Jeri is a girl, she has short brown hair tied with a green garter on the side. She wears a light yellow shirt with lapels, a pistachio green jumpsuit dress, socks the same color as the shirt, and turquoise sneakers.

Usually shown with her sock puppet early on in the series.

Jeri is a cheerful and sweet person who is always there to encourage her friends, though her later descent into despair has led some fans to deem the character as "feeble."

Juri is a very hard case. She lives behind a facade. She always seems happy, however she is depressed, torn, and sad on the inside. It started when her mother died. The flashback makes her look about 4 or 5 at the time. The doctors and her father said, that fate was against them. When Juri hears this, she assumes it was her mother's fate to die. Her father, Tadashi, didn't take the death so well either, he became unable to show affection towards Juri, the living memory of his wife. When her father remarries, Juri is faced with a difficult situation.

In her eyes, her step-mother is trying to erase the memories of her biological mother. This isn't the case because Shizue, her step-mother, really likes Juri and is very kind to her. However, Juri is very cold towards her. Juri's hand puppet on the outside is used to entertain her 4 year old half-brother, Masahiko. But on a deeper level, it is a door to a false world that Juri lives in. She denies the existance of sadness and darkness.

When she faces such emotions, she retreats to her "happy place". For example, when Takato is talking to her about Growlmon being to large; she thinks that he is embarassed to be seen with a taller girl, she doesn't know how to respond and... arf, arf, she starts talking through the puppet. When Hirokazu and Kenta are scared of Takato after they saw Guilmon, they were very cold to Takato. Juri overhears that and tries to defend Takato, she panics when confronted with anger and sadness again, and she ends up talking through the puppet once again.

Where Kazu Shioda and Kenta Kitagawa ran away when the existence of Guilmon was proven, Jeri was quick to befriend the strange Digimon, becoming the first non-Tamer to do so.

Jeri is into the Digimon Card Game and has some very rare cards in her possession. Takato's friend Rika Nonaka gave her some pointers on what cards to use, beginning a friendship between the two. Jeri seeks to become a Tamer, and chases after Leomon when he first appears. She eventually becomes Leomon's Partner before she and the other Tamers, as well as Kazu and Kenta, headed out into the Digital World in search of Calumon.

Jeri proves herself to be a very capable Tamer with potential for greatness, even using the rare and powerful LadyDevimon card on Leomon to destroy the evil Digimon Orochimon who had kidnapped her, but unfortunately her career is cut short when Beelzemon destroys Leomon and uploads his data.

Following this Jeri becomes withdrawn, believing that her destiny is to be alone. Some time during their return to the real world, Jeri's cheerful facade is ripped away and through flashbacks and a brief explanation she delivered to Takato, her less-than-cheerful past is revealed. Her biological mother had died a while ago and when Jeri met her stepmother, she didn't give her a chance, as she was still very deeply traumatized by her mother's death. Following this Jeri began to think she was a bad person because while deep down she knew her stepmother was a nice woman, she still felt unable to accept her and couldn't empathize with her. She also thinks over and over about the words that her father said after her mother's death, which Leomon repeated before dying: "it's all because of Destiny."

Jeri showed no sign of caring about what was going on around her and she kept on looking into her now dead Digivice. The only real reaction came when Takato and Guilmon, now fused into Gallantmon, were about to kill Beelzemon after defeating him; she yelled at them to spare him, and when Beelzemon asked her why, she tearfully said she didn't want anyone else to die because of her. She later showed more emotion when Rika returned after becoming Sakuyamon, where she said she was afraid she had lost another friend. When she disappeared for a moment and then came back, her eyes were different, as if something possessed her, and she had an evil smile, even after the kids were back in Tokyo.

Later, it was revealed that "Jeri" was the D-Reaper's first Agent, who assumed Jeri's form to learn all she could about the Tamers. The real Jeri had been taken away and placed in a space within the D-Reaper. The Agent 1 said that Jeri was the perfect being for the D-Reaper as it used her sadness to strengthen itself. During this time, Calumon somehow sensed her presence and made an attempt to rescue her along with Impmon, who after wallowing in guilt for what he did to Jeri became determined to save her. Impmon Warp Digivolved to Beelzemon Blast Mode to defeat a bunch of Bubbles Agents and managed to open a hole big enough in the Kernel Sphere (the place she was trapped in) for Calumon to enter but was captured himself.

He was eventually released and thanks to Gallantmon and Grani who managed to defeat the Agent guarding the Sphere, tried desperately to break Jeri free from her prison. He finally broke through when somehow he was able to tap into Leomon's data and use his Fist of the Beast King. Unfortunately this had an adverse effect, as it was a harsh reminder to Jeri that Leomon was dead and that the perpetrator who caused that was right in front of her. Terrified, she backed away from her would be savior. In the urgency of the situation and encouragement from Takato, Jeri did eventually accept Beelzemon's good intentions, but alas by then it was too late; the Sphere closed up again, trapping her along with Calumon once more.

Meanwhile, Jeri's puppet was being controlled by the D-reaper and it was trying to convince Jeri that humans don't deserve to live. D-Reaper was able to feed off her negative emotions, but gradually, thanks to Calumon she decided to speak up and reject the idea of real death. She spoke what Leomon had spoke (while he was destined to die, she still had a lot to live for, and so did the others) and was rescued by Takato after the D-Reaper was defeated. During the battle Gallantmon and then digivolved to Gallantmon Crimson Mode attempted to reach the Kernel Sphere and rescue her.

Gallantmon Crimson Mode defeated and destroyed many Agents in his attempt to rescue her including the immensely powerful Jeri Type Agent. During this time Jeri managed to break the Kernel Sphere with her D-Ark but it began to become flooded with Chaos Mass. Calumon somehow protected them with a force field and got them out of the Kernel Sphere. Gallantmon Crimson Mode reached the Sphere but she wasn't there but nearby but before he could reach her he De-Biomerged back into Takato and Guilmon. Takato finally rescued her by having Guilmon fling him to her with his tail.

By the end of the series, Jeri snaps out her depression thanks to Takato and Calumon, and realizes that humans can make their own destiny and that she was never meant to be alone. She also allows herself to forgive Impmon, much to his relief.

During the D-Reaper Saga; Calumon seemed to become a sort of second partner to her coming to her rescue with Beelzemon, cheering her up and protecting her somehow with a force field during the final battle before Takato managed to rescue her. Also when everyone said their goodbyes to their partners at the end, Calumon was the one she said goodbye to, thanking him for helping her out.

Jeri not only attended Rika's birthday, but she along with Calumon (who seems to be living with her) also helped Rika's Grandmother, Seiko Hata with all the decorations as well. It was claimed by Takato that the party was her idea. 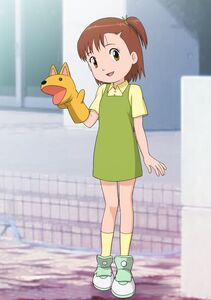 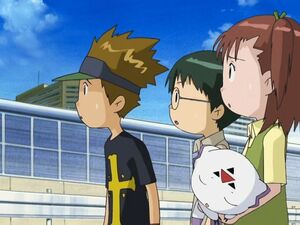 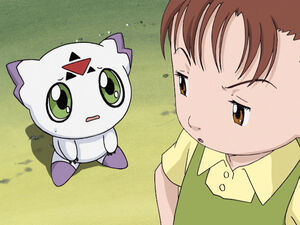 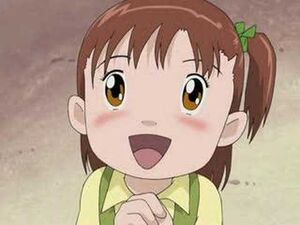 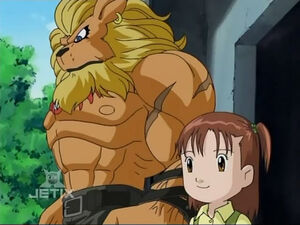 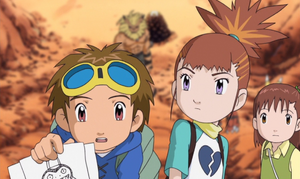 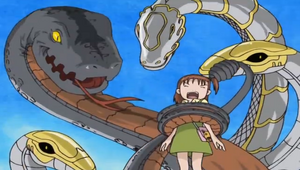 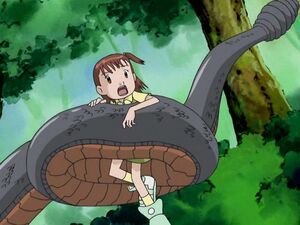 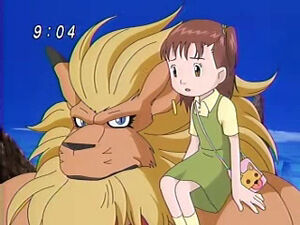 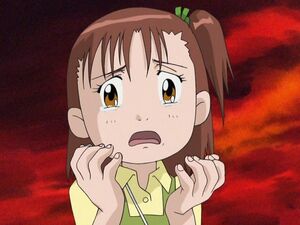 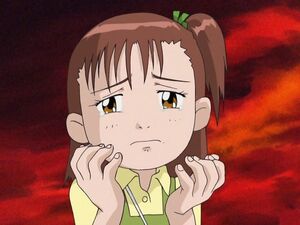 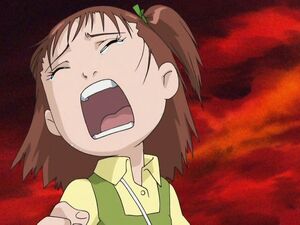 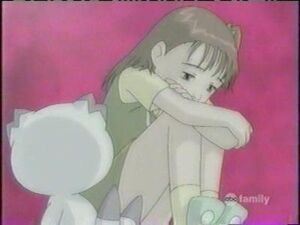 The real Jeri captured by the D-Reaper 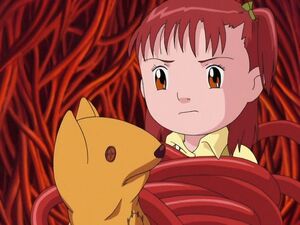 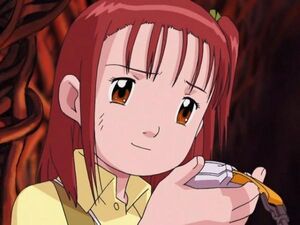 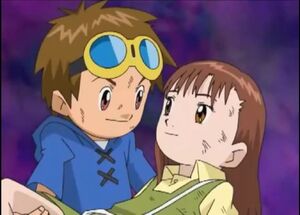 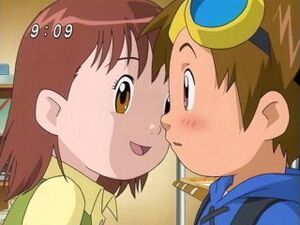 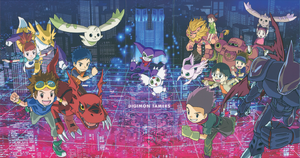 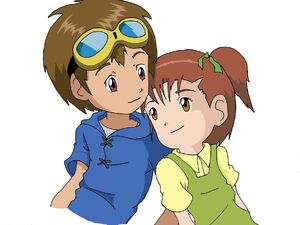 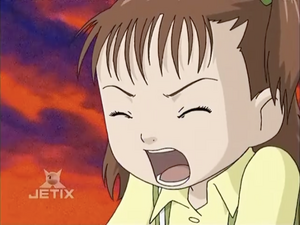