To help the Teen Titans stop the Brotherhood of Evil. (succeeded)

The Brotherhood of Evil

Jericho is a minor superhero and an Honorary Titan, debuting only as a minor character in the fifth and final season of the cartoon series Teen Titans.

Jericho is one of many superheroes contacted as part of the expanded team when the Titans get ready to fight the Brotherhood of Evil. The Brotherhood pirate the Titans' own communication network in order to track down each and every honorary Titan to pick them off separately. Jericho is one of the few members to fight off his attackers and reunites with the remaining members lead by Beast Boy. Jericho uses his powers to hijack the villain Cinderblock and get his friends in possing as Cinderblock's captives.

Once inside the remaining Titans free their imprisoned comrades and defeat the Brotherhood. Jericho only appears in the two episodes towards the end of the series spent fighting the Brotherhood and so relatively little about his past is touched upon including his link to the show's mainstay antagonist Slade.

Jericho has fair skin complexion, lime green eyes and blonde hair. His outfit consists of a long-sleeved white shirt underneath a purple tunic with a gold belt, black pants and purple boots. There are also golden braces connected to the ends of his sleeves and the tops of his boots.

Almost nothing is truly revealed about Jericho's personality, but his traits state that he is an innocent, caring, and good-natured pacifist who abhors fighting and violence. However, when a crisis is at hand, Jericho doesn't hesitate to fight with surprising skill.

Jericho has the unique ability to possess any living being he can make eye contact with. Immediately after eye contact is made, he transforms into a see-through matter that can phase through things, in which Jericho phases into the body of the person he is possessing, giving him complete control. It is easy to tell when he takes control of someone as their eyes will turn the same color as his own.

Jericho is also able to access the knowledge and memories of those under his influence. An obvious weakness to this ability is that Jericho does not always know the personality and traits of the person he is possessing. An example of this comes from the time he possessed Cinderblock. Before the episode "Titans Together", there was no indication at all that Cinderblock could speak. 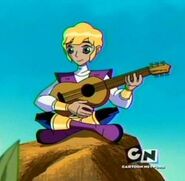 Jericho playing with his guitar 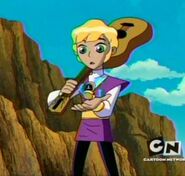