Start a Wiki
Jermaine is the supporting character of Xiaolin Showdown. He was a kid from New York who became friends with Omi. He was skilled at basketball and later went on to become a Wudai Warrior-level Xiaolin Monk, after being trained by Chase Young. He eventually redeems himself after Omi apologized about his jealousy of his success.

He was voiced by the late Lee Thompson Young.

Jermaine was mostly seen wearing his red, white and blue number seven jersey with his red trousers. He had a small afro and small black eyes, and very thick eyebrows. When not wearing his jersey outfit he was in his Xiaolin monk outfit similar to that of Omi, Kimiko, Raimundo and Clay.

Jermaine was a streetwise, laid-back, relaxed kid but who was very good at physical activities when he needed to be. He was a loyal and good person but could become angry when pushed too far, such as when Omi didn't treat him very well because he was jealous of his achievements.

Jermaine was first seen in the episode "My Homey Omi" where the Xiaolin Monks travelled to New York to find the Serpent's Tail. When Omi got lost, he ran into Jermaine and they became friends. When Omi did find the Serpent's Tail, he reached it at the same time as Jack Spicer. Spicer declared that the showdown would be a game of basketball. Omi was joined by Jermaine who helped him win. After they won, Omi offered Jermaine a place at the Xiaolin Temple.

He declined but we later see Jermaine return to the Temple in "Something Jermaine" where he has attained the level of Wudai Warrior, the same level as Omi, which caused him to become very jealous. This drives a wedge between the two. Omi soon figured out that Chase Young had been the one training Jermaine, although Jermaine had no knowledge of Chase being evil. Later on in the episode, Jermaine, Omi, Jack Spicer and Tubbimura competed in a Xiaolin Showdown for the Golden Finger. Tubbimura and Spicer were eliminated first, leaving Omi and Jermaine to fight. But Omi revealed Chase Young's true nature to Jermaine and said he will not fight him. Jermaine eventually realized what's been going on and agreed not to fight Omi. The two patched things up and returned to being friends. 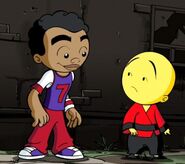 Retrieved from "https://hero.fandom.com/wiki/Jermaine?oldid=1764186"
Community content is available under CC-BY-SA unless otherwise noted.