Jerome is a character from Ginga Legend Weed. He is one Weed's best allies as well as his strategist mentor. Originally, he was a contract killer and guard dog trained by humans. He was a leader of a group which mission was to hunt down the P4.

He is voiced by Masaya Takatsuka in the Japanese Version.

Jerome is a trained guard dog and assassin. He was sent after P4 by his creators to destroy it. He originally had 13 subordinates; the last four of them (Rocca, North, Robert, and Wheeler) were killed by P4. After the death of P4 and all was peaceful once more, he became Weed's adviser, and taught him how to fight better.

When a human shot his leg with a bullet, the Kōga ninja dog Tesshin offered to take it out one night, but Jerome told Tesshin to keep the bullet in his leg as a punishment for his previous actions as an assassin.

Later, Jerome was driven out of Weed's pack by Weed himself when he murdered two of Hōgen's assassins: Lector and Thunder. He worked for Weed independently from then on, along with his new pack of Shikoku dogs. Jerome finally meets Weed after saving Reika from a river. He then saves GB from Hōgen. As he fought Hōgen, pain struck into his leg due to the bullet.

Jerome is then thrashed by Hōgen and is thrown into the river. Weed jumps in and tries to save Jerome. In the river before his death, Jerome had saved Weed by holding his head above the water until he was rescued. Jerome eagerly awaits to meet his fallen comrades again and, interestingly, P4 too. In the last episode, Jerome's ghost appears to Weed in a field of flowers, but then vanishes.

Jerome was one of the guard dogs who's job was to make sure that P4 didn’t escape from the scientific institute. When P4 escapes anyway, Jerome and his soldiers do everything they can to stop him. Jerome meets Weed in the mountains of Ōu where he at once realizes that he is the son of Gin. He now tries to get Weed to join the fight against P4 and succeed. During the fight, P4 kills all of Jerome’s soldiers and hurts Jerome badly. However, P4 dies and Jerome survives. He then joins Weed’s group to find and help Weed’s father, Gin, the Great Leader of Ōu. Jerome gets shot in the leg by a human and has to fight one of the humans’ dogs called Ron. Ron bites off Jerome’s ear but looses the fight.

Jerome is known in the pack as the assassin, a name which he lives up to. When he discovers two of Hōgen's spies, he kills them even though Weed told him to leave them alone. As a punishment, Weed sends him away from his pack. However, Jerome does not leave Weed entirely, but stays close in case something should happen. He is welcomed back when the fight against Hōgen begins. Jerome and Weed are the first to feel Hōgen's fangs and they are thrown into a roaring river. Here, Jerome nearly kills himself when trying to keep Weed's head above the water. Because of this, Jerome cannot participate in the final battle, but is brought to the human, Daisuke, by GB.

Just as Hōgen is defeated, Jerome hears the howls of the Ōu army whilst in the care of Daisuke. Once he is fully recovered, he is relased back into the wild. Jerome travels up to the mountains and is ambushed by monkeys who are after some puppies. Here, he encounters Yukimura, Weed's older brother, who saves him from the monkeys. When Weed comes to search for Jerome, he too meets Yukimura. All of them join forces to kill the baboon general, Shōgun, who threatens to take over Yukimura's territory.

Again, Jerome manages to escape Weed and flee to Hokkaidō where he hides in shame over his past (By this it meant the episode where he killed Hōgen's spies). In Hokkaidō, he meets Hakurō, an old Ōu warrior. He tells the old husky that Ohu is now in control of Gin's son weed. But, Hakurō tells Jerome to watch out, since intruders have started to threaten their land. Jerome doesn't listen very carefully and is soon face to face with one of the intruders, a female German Shepherd named Lidiya.

Lidiya lures him into an ambush where the leader of the intruders, a German Shepherd named Viktor, attacks him. Jerome is seriously wounded and taken hostage. Lidiya tries to trick him into telling where Hakurō is hiding, but Jerome tricks her instead. He fakes the seriousness of his wounds and Lidiya believes that there's no need to guard him. Jerome escapes as soon as she leaves and flees back to Hakurō, who leaves him to recover at the Collie, Ram's home.

When Jerome is recovered, he runs back to help Hakurō, only to find he was killed by Viktor. Unfortunately, he bumps into Viktor and is taken hostage again. However, he is not killed since Lidiya manages to convince Viktor that they need Jerome alive. Slowly, Jerome starts to fancy Lidiya and they both fall in love. Viktor leaves Jerome behind, guarded by Lidiya. Suddenly, the Ōu commander, Akame appears and follows Jerome to the Ōu army's base for safety. Jerome follows Gin's platoon when they are all taken hostage by Viktor in a gorge. In the gorge, Jerome and the others face many days without food or water. When the fight begins between Viktor's army and the Ōu army, Jerome takes part in the fight, but is quickly knocked out by Bozlev. When he comes to, he continues to fight alongside Lidiya. Like most of the Ōu army, Jerome is badly wounded by the Russian dogs. Shortly, Daisuke and Hidetoshi appear on the scene and Jerome is healed along with the rest of the injured dogs.

After the battle against the Hybrid bears ends, Jerome has 6 pups with Lidiya. 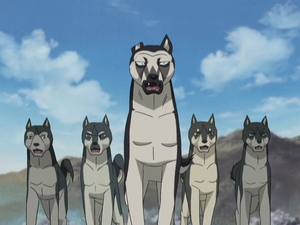 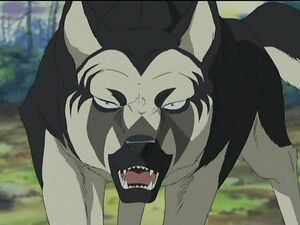 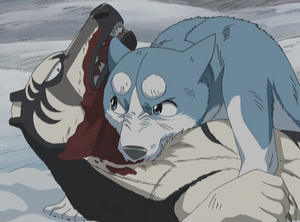 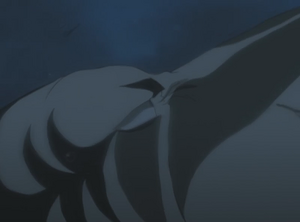 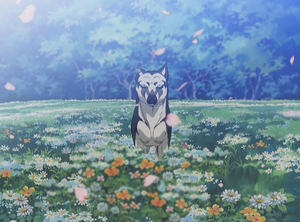 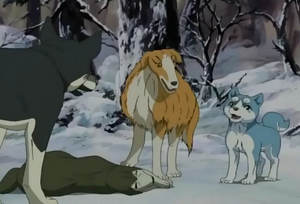 Add a photo to this gallery
Retrieved from "https://hero.fandom.com/wiki/Jerome_(Ginga_Legend_Weed)?oldid=1813559"
Community content is available under CC-BY-SA unless otherwise noted.