Jesse Chambers-Wells, also known as Jesse Quick, is the daughter of Harrison Wells of Earth Two. A college student on her Earth, Jesse was used by Zoom in a plot to turn her father against Team Flash. After being hit by the S.T.A.R. Labs particle accelerator of Earth One, Jesse gradually managed to unlock her Speed Force connection, becoming a meta-human speedster and a hero.

After helping Team Flash defeat Grodd and his gorilla army, she decided to move to Earth One with Wally West, whom she is currently dating. However, after learning Savitar had plans for her, she left Earth One to take over for Jay Garrick as the Flash of Earth Three, until Savitar is once again imprisoned and Jay returns from the Speed Force. She then returned to Earth-2 to continue her heroics and lead her own team.

However, she alongside her Earth was vaporized by a wave of antimatter sent by the Anti-Monitor. Her status in the new multiverse is unknown, although Team Flash assumed she no longer exists.

She is portrayed by Violett Beane.

Jesse Chambers Wells was born to Harrison Wells and an unnamed woman on Earth-2, and was given the nickname "Jesse Quick" by her father because of her sharp intellect and quick-thinking nature. When she was four, she and her father went to a planetarium for the first time. There, she got lost in the Mars exhibit, and her father shut the entire facility down to look for her. When she was six years old, Harrison gifted her a Mr. Jiggle Wiggle teddy bear. She and her mother would often visit her father at S.T.A.R. Labs and got freaked out by his "work voice." In addition, Jesse's blood type is PZ Negative, something that doesn't exist on Earth-1

At some point in her childhood, Jesse's mother passed away, and she would later graduate from high school at age 15. After graduating, she decided to enroll at Central City College, where she had five majors, one of them being biochemistry. In March of 2015, Jesse supported her father as he unveiled his new line of meta-human awareness apps. When "Jay Garrick" showed up, she was in awe, and later watch in concern as he criticized Harrison for the initial meta-human infestation. 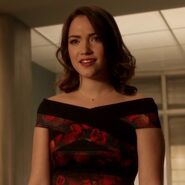 Retrieved from "https://hero.fandom.com/wiki/Jesse_Chambers_Wells_(Arrowverse)?oldid=2231724"
Community content is available under CC-BY-SA unless otherwise noted.