Jesse Quick (real name Jesse Belle Chambers), also later known as Liberty Belle, is a fictional character and superheroine from DC comics and its universe. She is the daughter of superheroes Johnny Quick and Liberty Belle, and is a member of the Flash Family, Justice League, Justice Society, and Teen Titans. She gained the ability to connect to the speed force after learning the formula 3x2(9yz)4a, and become a crime fighter.

She was created by Angelo Javier, Len Strazewski and the late Mike Parobeck, and first appeared in Justice Society of America Vol. 2 # 1 in August of 1992.

Jesse Belle Chambers was born in Queens, New York to Johnny Chambers and Elizabeth "Libby" Lawrence, who were the golden age superheroes Johnny Quick and Liberty Belle. Her father taught Jesse the formula that allowed him to draw energy from the speed force, hoping that she would become his successor. However, Jesse devoted her youth in studying superheroes of the past instead of becoming one herself.

Jesse would later attend Gotham University, where she began writing a thesis topic titled "The Impact of Superheroes on Society" when the Justice Society of America re-emerged. She began cataloging their adventures, and when her father asked her to deliver some documents to the team, she helped them by becoming the costume crime fighter, "Jesse Quick". She was later asked by Wally West and Max Mercury to help teach Bart Allen the ways of the super speed, but West asked her to take on the mantle of the Flash because he knew he possibly wouldn't come back from the speed force.

Jesse, however, saw through his plan, as West really intended for Bart to be the next Flash, but had given Jesse the mantle to provoke him into actually getting serious. When Wally was trying to save Linda Park from a laser blast from Kobra, Jesse saved him, but the laser nearly severed her leg. She attempted to metabolize the wound with super speed, but Wally returned from the speed force and was able to heal it. Even though he had healed her leg, Jesse still felt animosity towards Wally for having used her.

Shortly after, Jesse lost her super speed, and she immediately blamed Wally, as he been directly using the speed force energies instead of simply tapping them like other speedsters. It was later revealed that it was the supervillain Savitar, who severed her connection to the speed force alongside other speedsters. She accompanied Wally in going to Savitar's lair, where she regained her super speed and fought him. Her father sacrificed himself by merging himself with Savitar, and Wally bested the villain while Jesse mourned her loss. After her father's death, Jesse took over for his company, Quickstart Enterprises.

Jesse would join the New Titans to stop a nuclear threat, but declined the offer to join the Titans when Wally selected her to join the roster. She would ultimately join the Titans, but only for a short time, feeling herself to be second best to Wally, but was later persuaded by Nightwing to return.

She later became involved in a murder mystery involving her mother's fiancé, Phillip Geyer, which revealed that Jesse and Phillip were having an affair which had contributed to his death. Although Jesse attempted to reconcile with her mother, Libby found it hard to forgive her daughter for having an affair with Phillip. The Titans were disbanded afterward, as two of the team's members were killed by a rogue Superman robot.

Following the Titans' being disbanded, Jesse returned to her responsibilities at Quickstart Enterprises, finding little time for a social life. When Wally needed help in fighting Zoom, Jesse lent him a portion of her special abilities, which temporarily boosted Wally's speed. However, Jesse was left powerless and unable to remember the formula to access her powers, but when Wally knew the formula, she told him not to remind her.

Afterward, Jesse took a new position as the business manager for the reformed Justice Society of America. When Hourman (Rick Tyler) disappeared, Jesse was deeply affected, as she had grown quite close with him. Jesse later reconciled with her mother, as she was rescued by the Justice Society when she returned to her role as Liberty Belle. 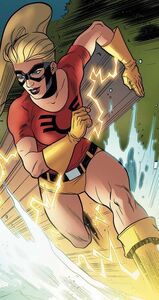 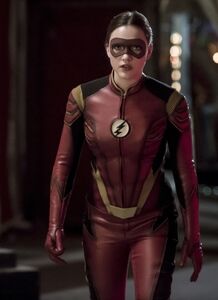 Violett Beane as Jesse Quick in the Arrowverse.