Jessica Campbell Cage (née Jones) is a fictional superheroine from Marvel comics and its universe, and is the main protagonist of her series of the same name. who had used the aliases Jewel, Knightress, and Power Woman. After hanging up her costume, she became the owner and sole employee of Alias Private Investigations.

She was created by Brian Michael Bendis and Michael Gaydos, and first appeared in Alias # 1 in November of 2001.

In the Marvel Cinematic Universe, she was portrayed by Krysten Ritter on Netflix's Jessica Jones, and The Defenders.

Jessica Campbell was born in Forest Hills, Queens, New York City to Dave Campbell and an unnamed mother. She attended Midtown High School along with Peter Parker, whom she had a crush on (but never reveled it to him). She witness Parker be bitten by the radioactive spider in the New York Hall of Science, and he later become the superhero Spider-Man.

On a way from a Disney World trip with her family, the car rolled into a military convoy that was carrying radioactive chemicals, and Jessica was the only survivor, and was exposed to the chemicals. Spending her time in a coma, her powers would be unleashed when the Fantastic Four fought Galactus, as cosmic radiation came off. After awakening, Jessica was taken to the Moore House for Wayward Children until she was adopted by Alisa Jones and her husband.

When being re-enrolled into Midtown, Jessica was bullied by Flash Thompson, as Peter tried to befriend her since they both had lost family members. Jessica lashed out at him, and ran away until she started to fly. She crash-landed into the Hudson River, and Thor saved her from near-death, and she also had Scorpion apprehended when landing on him. When seeing Spider-Man fight the Sandman, Jessica realized that she could use her powers for good, and decided to become the superheroine Jewel.

She was active for four years, partnering up with Carol Danvers after seeing her fight Doctor Octopus. In addition, she would team up with Power Man and Iron Fist, and the three took a picture to celebrate. She also teamed up with Thing in her early career, but he would not have a memory of their teamwork, and work with her future boyfriend Scott Lang. Despite her heroism, she was not monitored as other heroes of that era, but did fight off the Skrulls in Central Park. She would meet the Purple Man, who would take over her mind, and told her to take care of the police.

The Purple Manu used Jessica to be his right-hand in schemes, such as bank robberies, and to hurt people he requested. One day, Kilgrave ordered Jessica to fight Daredevil, but instead fought Scarlet Witch (since she was wearing red), and broke out of her trance. She was then attacked by Iron Man and Vision, and placed into another coma. With the aid Jean Grey, she was taken out of her coma, and dated Clay Quatermain who asked her to join the Avengers, but she declined.

Embittered by her experience of the Purple Man, she became a hardened vigilante named Knightress, but it only lasted for a week. When fighting Owl and his gang, she learned that one of the thugs brought children, and encountered Luke Cage. She took off her mask to reveal her identity to the cops, and watched over the children as Cage had a long talk with her.

Jones retired from being a superhero, and began her detective career by creating Alias Investigations. Her first case was for Luke Cage, who was looking for his father, who didn't trust his son. Jones' next case was on a man who was cheating on his wife, and attacked the former when learning that his wife was a mutant. One case involved someone trying to find their sister, Miranda Pritchett, and Jones found out she was safe, and was unknowingly dating Captain America.

When going back to Miranda, she found the crime scene of the former's home, and she had been strangled. Jessica was force to go to the police of Detective Paul Hall, and was angered that she was accused of murdering Miranda, but saved by her lawyer Matt Murdock. With the aid of Carol Danvers, Jones realizes she had been setup to video Captain America to damage the President's reputation. After confronting Mr. Zoumas, Captain America called Jones, thanking her for saving his reputation.

Around this time, Jones had begin seeing Luke Cage, despite Carol's attempts to have her return to Scott Lang. Jameson would hire Jessica to find out the identity of Spider-Man, but instead helped the poor and sick, and was soon fired. When Daredevil's identity as Matt Murdock was revealed, Jones and Cage became his bodyguards. 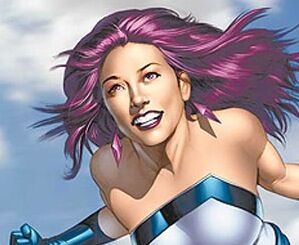 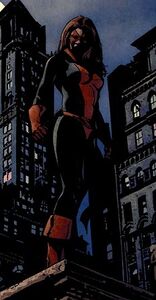 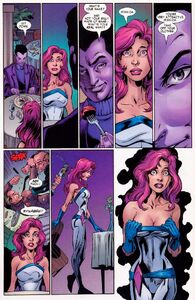 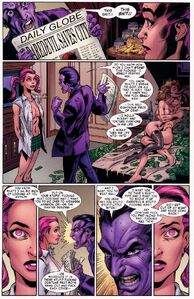 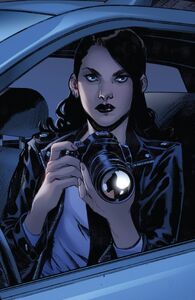 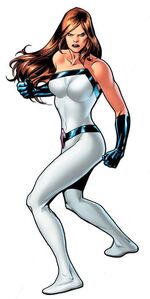 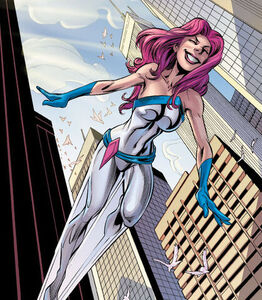 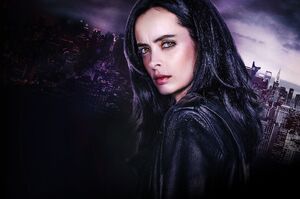 Jessica Jones in the Netflix series of the same name.

Jessica Jones in Marvel Ultimate Alliance 3: The Black Order.
Add a photo to this gallery

Retrieved from "https://hero.fandom.com/wiki/Jessica_Jones?oldid=2053389"
Community content is available under CC-BY-SA unless otherwise noted.