Leader of the Babylon Rogues

To find the Babylon treasure (succeeded)

Wave the Swallow
Storm the Albatross
Sonic the Hedgehog (arch-rival)

Jet the Hawk is an anti-hero in the Sonic the Hedgehog series, and also is one of the three secondary antagonists (alongside Wave the Swallow & Storm the Albatross) of Sonic Riders, and one of the three anti-heroes of Sonic Riders: Zero Gravity and Sonic Free Riders. He is an anthropomorphic green hawk who is the leader of the current generation of Babylon Rogues and is one of Sonic's rivals.

He starts off as a villain in Sonic Riders, but in the end he reforms and becomes an anti-hero.

Jet is highly arrogant, confident and conceited with a massive ego, considering himself the fastest of all and holding everyone else in low regard, and often brags about and showcases his skills on his Extreme Gear to enforce his superiority to others. While he is willing to praise others' skills, he usually makes his compliments short before following them up with an insult. Over time though, Jet has matured somewhat and become more of a sport, given that he gave Shadow and Rouge genuine and well-meant compliments on their skills and efforts during the second World Grand Prix.

Because of his high skills and arrogance, Jet is usually very rude and somewhat respectless, and has a snide sense of humor to go along with them. He enjoys insulting, mocking and talking down to other people about their skills, and he has no qualms about verbally rubbing his victory or peoples' losses in the face of others, such as when he told Sonic that the dirt suited him after he defeated him in the finals of the first EX World Grand Prix. Even when dealing with his own teammates, Jet can be rude and respectless, such as when he called both Storm and Wave useless when they were losing in Sonic Free Riders. Also, when listening to Wave's long-winded talks, he either tells her to shorten her information down and put them in simple terms, or ignores her completely.

Jet is a extremely prideful indiviual who does not want to look bad. He is a sore loser, not accepting loss in any form, and is very protective of his reputation. He also refuses the pity of others, no matter what it will cost him, as he considers it a direct insult to his character. When faced with a loss, however, Jet will reluntantly, but proudly accept it, and work hard to overcome it and settle the score. He also despises those who are faster or more confident than him.

For the most part, Jet is pretty laid-back and nonchalant, which mostly stems from a mixture of his carelessness, overconfidence and arrogance. Mostly, Jet chooses not to show this side of his personality to people he does not explicitly know, as he is too prideful to let others know about the more undesirable aspects of his traits. While he is aware about his duties as leader of the Babylon Rogues and understands some of it, Jet does not take his responsibilities very seriously, and instead remains very unconcerned and indifferent in the face of present issues. However, Jet knows when to assert his authority as leader when motivated enough, and comes off as a strict leader who has little tolerance for failure. Over time, Jet has seemed to have become a better leader of the Babylon Rogues, receiving better support from his teammates and leading them with a better attitude.

On many occasions, Jet is shown to have a really short temper. In Sonic Riders, hearing Wave and Storm quarrel makes him angry enough raise his voice and when Storm caused a portrait to fall down on him, Jet began stomping around and aggressively kicking whatever he saw. Also, when he discovered that Sonic had an Ark of the Cosmos, his anger built up to the point where he was twitching and almost exploded. While Jet has become more level-headed in some fields since his debut, such as ignoring Wave and Storm's frequent arguments, he is still prone to angry outbursts at times.

Jet has a defined love for money and treasure, which he likes the most besides himself. His primary motivation in life is to acquire as much wealth as possible, even having daydreams of stacks of gold that can almost make him drool in delight, and if it turns out that there is not a profit to be gained from a job, Jet quickly loses all interest in the matter. When it comes to acquiring wealth, Jet is very greedy and selfish, given that when he went after Eggman to get the Babylon Garden back, it was because he wanted the Treasure of Babylon for himself, rather than stopping Eggman from using it to conquer the world.

When having to compete, Jet enjoys Extreme Gear racing or pretty much any kind of activity that requires extreme stamina and skill, and is fully dedicated to the competition, regardless of his attitude. Despite his desire for victory, Jet opposes cheating and seeks to win only fairly by going up against his opponents with his own skills. If he cannot win fairly using his own skills, or if he does not feel right about winning, his victory is meaningless to him, and he will actively seek a rematch to make it right and make sure he achieves absolute victory. While he is a sore loser, Jet will stand by his losses, even if there were unexpected circumstances that caused his defeat. While he may not always show good sportsmanship, Jet enjoys racing against worthy opponents on his Extreme Gear, and can be content with whatever the outcome may be after having a good race, such as at the end of Sonic Free Riders where Jet had no problem going home empty-handed because he had a good time racing. 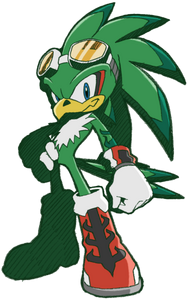 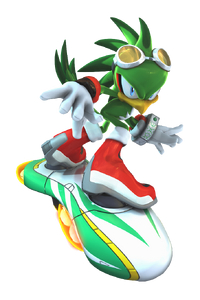 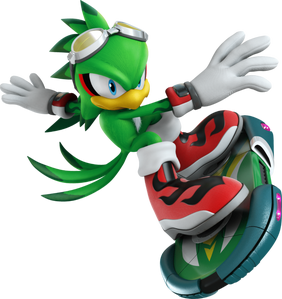 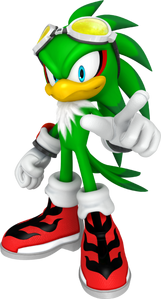 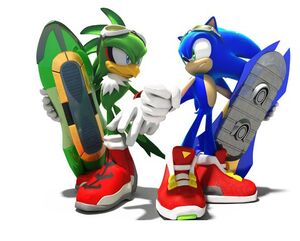 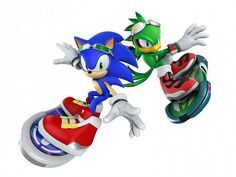 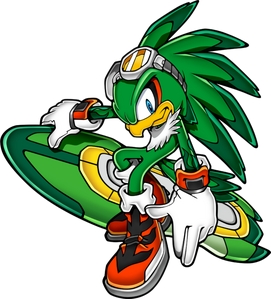 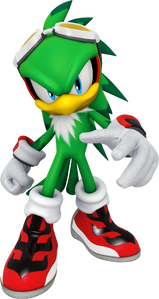 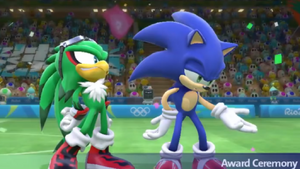