Transformers: Revenge Of The Fallen (2009)

Jetfire is a major protagonist of the 2009 film, Transformers: Revenge of the Fallen.

Jetfire was among the first of the Seekers, able to travel through space to look for suns to be harvested to replenish the Allspark.

Jetfire served directly under the Prime who would become The Fallen, finding for him various stars to harvest, believing he was serving the Dynasty of Primes interests. Over time, The Fallen began to open up to Jetfire, his most loyal and capable Seeker, telling him that the Dynasty no longer served Cybertron's best interests. Jetfire had unwittingly sacrificed a populated star system under The Fallen's misdirection, and became confused.

Still, Jetfire continued to work with The Fallen, despite his doubts. His master and a small army of Constructicon drones had fashioned a new faction called the Decepticons with the intention of eventually subverting the Dynasty. Jetfire followed them to a desert on Earth to build another star harvester when primitive life made itself known. The Dynasty arrived soon thereafter to put an end to The Fallen's betrayal. Jetfire realized too late that he was on the wrong side, and so The Fallen warped Jetfire and the other "underlings" into orbit so that the Primes could face each other alone. As they fell planetward, Jetfire fought the Constructicons, and was eventually victorious, but with a price. He crashed from orbit into the Earth and laid dormant for thousands of years.

Jetfire was found by Sam Witwicky, Mikaela Banes, Leo and Seymour Simmons at the Steven F. Udvar-Hazy Center, an annex of the National Air and Space Museum, after Wheelie pinpoints the general location of the ancient Seeker. Sam reactivates him with an Allspark, waking him up from stasis lock. After a misunderstanding when the humans saw his Decepticon insignia, Jetfire activates a Space Bridge to teleport Sam and his friends to Egypt, explaining to them the origin of the Primes and the Matrix of Leadership. Learning of Transformers Optimus Prime's existence and death, Jetfire sends them to find the Matrix, which he speculates can be used to revive Optimus (Although it could also be used to power the Fallen's technology).

He demonstrates his immense power as an ancient Seeker when he arrives late in the final battle at the Giza Necropolis, and cleaves his battleaxe clear through Mixmaster and stomps off his head, killing him and saving the human forces nearby, although soon after he is attacked and mortally wounded by Scorponok but manages to easily crush his attacker after recovering from the surprise attack (saying he is "too old for this crap"). Eventually, as ordered, Sam revives Optimus with the Matrix (much to Jetfire's relief) right before the Fallen steals the Matrix to activate the Sun Harvester. Seeing that there might be hope with a living Prime, Jetfire then acknowledges that he had never done anything "worth doing" until he had fought on behalf of the Autobots and sacrifices himself by tearing out his spark in order to allow for Optimus to use his parts to engage the Fallen. Thanks to Jetfire's sacrifice, Optimus proves to be more than a match for Megatron and the Fallen combined and defeats Megatron before killing the Fallen. Optimus then discarded Jetfire's parts. 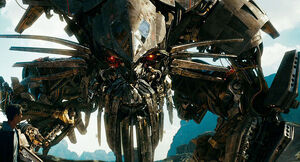 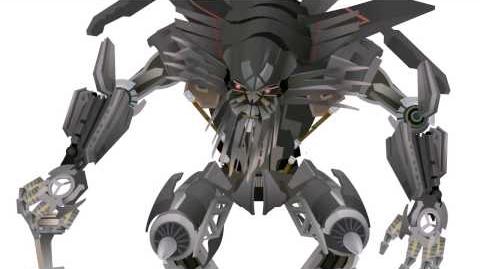 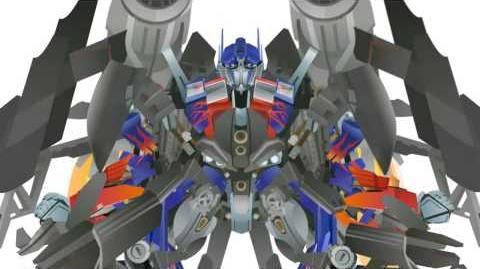