Heroes Wiki
Register
Don't have an account?
Sign In
Advertisement
in: Articles under construction, Infobox Update, Female,
and 36 more

Leader of the Restoration

Jewel the Beetle is a character that appears in the Sonic the Hedgehog comic series and its spin-offs published by IDW Publishing. She is an anthropomorphic beetle and the curator of the Mineral Museum. She is also Tangle the Lemur's best friend and the current organizer of the Restoration.

Jewel was conceptualized by Ian Flynn, while her design was handled by Jennifer Hernandez.

Jewel is an anthropomorphic beetle with primarily light blue skin, pink eyes, a small black nose and a white muzzle. She has an even lighter blue iridescent exoskeleton with a pink, yellow, green, and blue rainbow-like sheen. Her antennae are light blue. The interior of her wings are cream.

For attire, she wears a pink blazer with navy buttons, a white cravat with a golden brooch with a blue gem, a matching pink miniskirt, white gloves with navy cufflinks, navy tights, and pink wedge pumps.

Jewel is a well-mannered person with a bright sense of humor and a passion for minerals. Whereas Tangle is reckless and loud, Jewel is more reserved and cautious. Jewel is also quite fearful and dislikes violence very much.

Jewel has the ability to fly with her wings, as long as her elytra are intact. 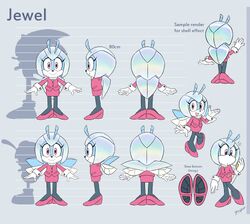 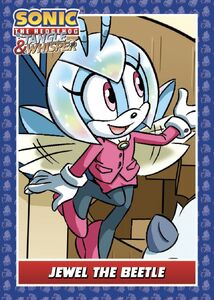 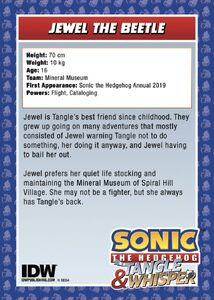