Heroes Wiki
Register
Don't have an account?
Sign In
Advertisement
in: The King of Fighters Heroes, Male, Honorable,
and 33 more

Being a pop idol groupie.

Help Kim and his friends.

Jhun Hoon (Korean/hangul:전훈) is a recurring member of the Korean team after his debut in The King of Fighters '99. He is the friendly rival of Kim Kaphwan. He was originally conceptualized to be "a veteran friendly character" with a Kim-inspired moveset. He is modeled after Kim Hoon from Fight Fever, and shares some moves from the game's last boss, Karate Kenji.

He was voiced by Kazuya Ichijō after he replaced with Yusuke Shirai.

Jhun Hoon has known Kim Kaphwan since childhood, since they trained at the same dojo. They both became masters of separate, stylized aspects of Taekwondo and parted ways from one another. Upon a meeting with Kim, Jhun Hoon noticed the presence of Kim's new "Rehabilitation project", consisting of Chang Koehan and Choi Bounge. After seeing Kim's ethics and methods of training, Jhun Hoon decided that he would show him a more efficient way of management; Jhun Hoon's methods are much more new-age and strange than Kim's simple harsh exercises, including lots of special equipment and activities, such as attending pop concerts. He continues to challenge Kim on his methods of enforcement and his skills as a fighter, to which they agree to work together during this time.

He is a perfectionist to his students and proud of his ideals of justice and Tae Kwon Do. Though strict and collected during fights and training, he is a moe and pop-star enthusiast during his free time. He particularly likes Athena Asamiya's performances and will lose face to get an autograph from her; in fact, the canon reason for his absence in The King of Fighters 2001 was due to his over-enthusiasm, for such a case where he broke his arm chasing an image of her. His alias in her fanclub is "White Tiger" (白虎, Bekuho).

Jhun's Tae Kwon Do style is similar but different from Kim's. Jhun is a unique character because he can actively switch between three fighting stances, counting his starting one. The other two are called Hawk Style and Eagle Style, Jhun can even perform specials that are unique to these stances. An unused design of Jhun appears as a Striker named Kang Bae Dal in The King of Fighters 2000. So far, unlike Kim, he has never used his fists for attacking. 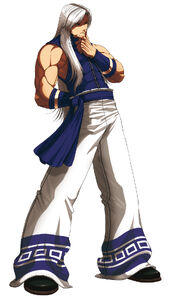 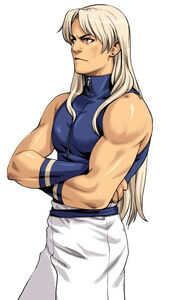 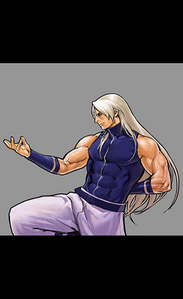