Jigglypuff is a character from the Pokemon franchise. Jigglypuffs are a singing type of Pokemon, however Jigglypuff is one particular member of its species who reappears in both the anime Pokemon and the video game franchise Super Smash Bros. It has no distinctive name or owner and so it is referred to purely by its species' name, "Jigglypuff".

Jigglypuff is one particularly member of its species that make several recurring appearances. This particular Jigglypuff found a small marker dropped by the humans that it mistakes for a microphone and uses to express itself and sing its heart out. Due to Jigglypuff's voices acting as sleeping inducing singles once they begin singing, the people Jigglypuff sings to always wind up falling asleep, Ash, Misty, Brock and Pikachu all included as well as the series villains, Team Rocket. Infuriated that people fall asleep while it is singing its heart out, Jigglypuff would get even with its perceived critics by removing the cap from the marker and use it to draw all over the faces of those it considered rude enough to ignore its performance.

Through out the anime Jigglypuff tries again and again to become a recognized performer only to have those around it fall asleep during its performances, affecting anyone from a crowd of people to a whole city. Jigglypuff became something of a feared creature as Ash and Team Rocket both gained a healthy fear for the thing whenever it showed up. Jigglypuff has inadvertently saved the day numerous times, putting thugs to sleep, wild Pokémon and even armies primed for attack, or just singing a few notes (too short and brief to send anyone to sleep; though it does break hypnosis). Though its songs also made the protagonists sleep the time spent coming-to always gave the heroes chances to regroup and overcome their foes.

It makes people go to sleep while singing. It can also fly in the air. Jigglypuff also appeared in the Super Smash Bros. series as an unlockable character in all four games (excluding the Wii U version, where it became a starter fighter). Jigglypuff was first created as a character for Smash at the height of the anime's popularity and so just as the Pikachu in it has been collectively presumed to be Ash's Pikachu so too is Smash Brothers Jigglypuff presumed to be the same feared recurring Jigglypuff from the anime, though there has never been an official confirmation of this other than Pikachu's connection only being to the handheld game. In Super Smash bros Brawl and Super smash bros for Wii U and 3DS Jigglypuff gains a final smash that pushes opponents away.

Jigglypuff is a balloon Pokémon, for type, it is a Normal/Fairy type. It Evolves from Igglybuff when it has a strong friendship with a trainer, then into Wigglytuff when in contact with a Moon Stone.

Jigglypuff in the Anime 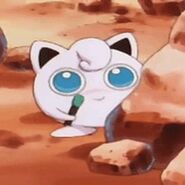 Jigglypuff puffed up with fury when its audience fall asleep on it again.

Jigglypuff grabs its marker to scribble on the sleeping audience

scribbling on its audience

Jigglypuff getting its mic stolen by Snubbull… karmic

Jigglypuff trying to retrieve its mic from Snubbull

Retrieved from "https://hero.fandom.com/wiki/Jigglypuff?oldid=1083661"
Community content is available under CC-BY-SA unless otherwise noted.