Jim is the main protagonist in the horror film, 28 Days Later.

Jim grew up in Deptford Britain with his parents. Jim was a bicycle courier for an unknown company. One day, while he was delivering a package from Farrington to Shaftsbury Avenue, a car cut across him, causing him to crash his bike and leaving him comatose. At some point between him going unconscious and waking up, the Rage Virus broke out from the Cambridge Primate Research Center and decimated the United Kingdom. In the chaos, Jim's parents committed suicide after writing a note for him if he ever found them. Jim was seemingly moved into a storage room to be hidden from the Infected as they tore apart Great Britain.

Jim woke up from his coma 4 weeks into the outbreak, Jim awoke from his coma (naked) in an abandoned hospital. After securing some clothes, he ventured out of the hospital to find London desolate and rife with signs of a catastrophe. Confused, Jim travelled through the barren streets, calling out for any signs of life. Gathering discarded cans of soda and money from off the ground, Jim observed a wall of missing people posters before moving on.

Later, Jim entered a church filled with corpses, where he was confronted by a priest infected with the Rage Virus. When the priest attacked Jim, the latter knocked the priest over with his shopping bag in self-defense, then fled the church, with several Infected in hot pursuit. Jim was saved in the streets from the Infected by two strangers, Mark and Selena, who then caused an explosion inside of a building that killed the Infected.

Mark and Selena then took a confused Jim with them to their hideout in a sweet shop in the London Underground, and Selena explained to Jim that while he had been comatose, the Rage Virus had spread through Britain and killed or infected the majority of the population. Worried for his family's well being, Jim had Mark and Selena take him across the city to his parents' neighbourhood in Deptford the next day. When they arrived at the home of Jim's parents, Jim found that they had committed suicide via drug overdose.

Mark and Selena told Jim that he should be grateful that his parents had died peacefully, and the trio decided to stay in the house for the night. During the following night, a bereaved Jim hallucinated his parents in the kitchen and unwittingly he attracts the presence of the infected Mr. Bridges and his daughter, who attacked him.

Mark and Selena killed the two Infected, but Mark sustained an injury caused by Bridges' daughter and Selena killed him. Selena ruled out intimacy between her and Jim, warning Jim that she would kill him "in a heartbeat" were he to become infected, and the two then left the house.

Jim and Selena continued through London until they saw lights flashing in a flat in an apartment building. They then headed to the apartment building, and climbed up the stairwell to the flat, chased by two Infected. They were saved by Frank, and he and his daughter Hannah gave Jim and Selena shelter in their flat with them. After Frank and Hannah went to sleep for the night, and Jim shaved his hair and beard (somewhat painfully due to the lack of shaving cream), he and Selena discussed whether or not to stick with Frank and Hannah. Jim believed the father and daughter were good people despite Selena's belief that they would slow them down.

The next day, Jim discovered from Frank that resources such as water were dwindling, so the group left the apartment in Frank's taxi on a journey to Manchester; where, according to a recorded radio message, the "answer to Infection" and help from the military supposedly awaited them.

The group narrowly avoided a horde of Infected while they stopped in an underground tunnel to change a flat tire, and raided a supermarket for food before travelling into the countryside. While they were refuelling the taxi at a cheeseburger shack, Jim went into the shack in search of cheeseburgers. There, Jim was attacked by an Infected Child, forcing him to beat the boy to death.

The group later stopped at an old castle ruin in the countryside to camp out there for the night, and that night Jim had a nightmare of his worst fear: being left alone. The group resumed their journey to Manchester the next morning, and arrived at the Forty-Second Blockade on the M602 near Manchester where the radio message had stated the soldiers were, but found Manchester in flames and destroyed, and the blockade desolate and abandoned. When Frank was infected by dripping blood from a corpse, Selena yelled at Jim to kill the infected Frank. Jim hesitated at first, but then got over it and was about to attack Frank with his baseball bat, when two surviving soldiers arrived and shot and killed Frank in front of a shocked Jim, Selena and Hannah.

The soldiers then took Jim, Hannah and Selena to the nearby Worsley House in the woods, where they were greeted by Major Henry West and given sanctuary at the fortified mansion with the soldiers.

During the trio's stay at the Worsley House, Jim and Selena revealed their romantic feelings for one another, but Selena recoiled before anything could fully develop. Major West also gave Jim a tour of the mansion, and revealed that he was keeping Mailer, an infected soldier, chained up in the mansion's courtyard; West explained that his "answer to Infection" was waiting for the Infected to die off from starvation, and that he was keeping Mailer alive to see how long that would take.

The following night, Jim, Hannah and Selena had dinner with the soldiers, which was cut short when the men were forced to fend off an attack on the Worsley House by the Infected. Afterwards, when Corporal Mitchell tried to force himself on Selena, Jim tried to intervene until Sergeant Farrellviolently forced Mitchell to leave Jim and Selena alone. Major West then talked with Jim over a drink about who Jim had killed since the Rage Virus broke out. A guilty Jim admitted to killing the Infected Child at the cheeseburger shack, and West then explained to Jim that he had promised Hannah and Selena to his men for sexual slavery in order to repopulate Britain after the Infected starved to death.

A horrified and disgusted Jim then tried to flee the Worsley House with Hannah and Selena, but the trio were attacked and captured by the soldiers. Major West asked Jim to join him and his men in their new society, but Jim refused, so West had Jim locked in the cellar for the night with Sergeant Farrell and scheduled to be executed the next morning. Over the night, Jim overheard Farrell theorising that the Rage epidemic was confined to Great Britain, and that the rest of the world was continuing normally.

The following morning,Jones and Mitchell took Jim and Farrell out to a body dump in the woods to be shot. While Jones and Mitchell were distracted arguing after killing Farrell, Jim managed to escape them and fled over the perimeter wall. There, Jim saw a jet flying overhead, giving him hope that Farrell was right and that civilisation outside of Britain has survived.

Jim subsequently set about re-infiltrating the Worsley House and rescuing Hannah and Selena,. He returned to the Forty-Second Blockade and sounded the siren, luring Major West and Davis away from the mansion and to the blockade. Jim bludgeoned and killed Davis with a crowbar, then disabled his and West's jeep and left West to the Infected. Jim subsequently returned to the Worsley House and released the infected Mailer to kill the other soldiers. Jim then prowled the Worsley House, looking for Selena and Hannah and avoiding Mailer and the new-infected Clifton as the latter two rampaged through the mansion and began killing the remaining soldiers.

Jim eventually found Selena taken hostage by Mitchell, and watched from in the attic as Mitchell made vulgar taunts towards Selena. Enraged, Jim then jumped down from the attic and took Mitchell by surprise, brutally killing the soldier by gouging his eyes out and beating him to death. Selena, believing Jim to be infected, then prepared to kill Jim but hesitated; prompting Jim to jokingly remind her that she had previously warned that she would kill Jim "in a heartbeat."

Jim and Selena then kissed, and Hannah then met up with them and the trio fled the overrun Worsley House and headed to Frank's taxi in the grounds.

There, the group found a vengeful Major West, who then shot Jim in the abdomen for the deaths of his men. The trio quickly fled the Worsley House in the taxi with the injured Jim, leaving West to be killed by Mailer. Hannah and Selena took the dying Jim to an abandoned hospital, where Selena was able to revive him. The trio subsequently took refuge at a remote cottage in west Cumbria, where Selena and Hannah used cloth and fabric to sew together a giant banner spelling out "hello" to get the trio's presence noticed by passing aircraft.

Twenty-eight days after escaping the Worsley House, Jim, Hannah and Selena put out the last piece of the banner as a Finnish jet flew by overhead and apparently noticed their message. The jet subsequently sent a helicopter to pick the trio up and fly them to mainland Europe.

Jim was at first confused and frightened in the aftermath of the Rage outbreak, but over time, he adapted to the change of everyday life. Jim is a kind, grateful and warm-hearted person, and greatly fears being alone. Despite this, Jim can be extremely vicious and merciless to those who want to hurt his friends; he left Jones and Bell to die slow and painful deaths, and brutally beat Mitchell to death for attempting to rape Selena. 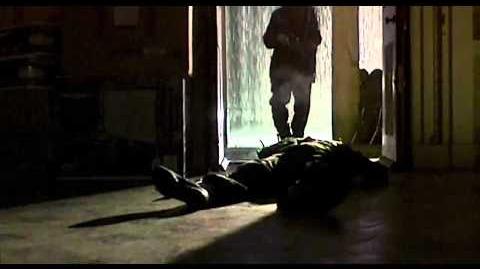 28 Days Later - Jim's rampage
Add a photo to this gallery

Retrieved from "https://hero.fandom.com/wiki/Jim?oldid=1951990"
Community content is available under CC-BY-SA unless otherwise noted.